"Green, Blue, Yellow And Red -- God Is Down In The Swamps And Marshes"

As I have noted previously, Patrick Kavanagh experienced a poetic renaissance in the mid-1950s while recovering from successful surgery for lung cancer.  Many of the poems from this "Canal Bank period" are approximately (by hook or crook) sonnets.  The following fourteen lines capture both Kavanagh's free-floating exhilaration at having dodged a bullet and the expansive feeling that accompanies the arrival of Spring.

Seeing the magnolias and dogwoods and cherries in nearly full blossom this week, I agree wholeheartedly. 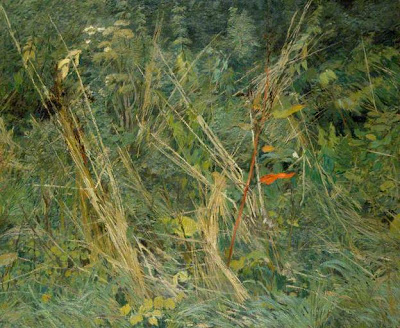 Green, blue, yellow and red --
God is down in the swamps and marshes,
Sensational as April and almost incred-
ible the flowering of our catharsis.
A humble scene in a backward place
Where no one important ever looked;
The raving flowers looked up in the face
Of the One and the Endless, the Mind that has baulked
The profoundest of mortals.  A primrose, a violet,
A violent wild iris -- but mostly anonymous performers,
Yet an important occasion as the Muse at her toilet
Prepared to inform the local farmers
That beautiful, beautiful, beautiful God
Was breathing His love by a cut-away bog.

In order to create a passable sonnet in this instance, Kavanagh breaks "incredible" at "incred-" in line 3 in order to obtain a rhyme for "red" in line 1.  Given his joy over Spring, I think that he should be forgiven.  And what but joy could lead to the rhyming of "marshes" and "catharsis"? 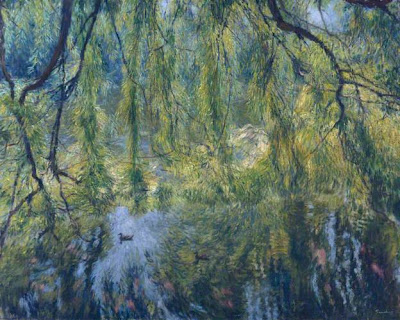 Yes, the line "Beautiful, beautiful, beautiful God/Was breathing His love by a cut-away bog" is rich. To take three 3-syllable words and repeat them without sounding like a broken record added to the five repeated first-letter b's is a poetic feat.

It's been a long time since I've commented, but I read your blog often and am grateful that you share these poems and paintings with your readers.

Thank you for your thoughts on Kavanagh's lines. I agree: the repetition of "beautiful," combined with "breathing" and "bog," is a risky business, but I think that he pulls it off.

I hope that you'll return soon. Thanks again.

Ah! Wonderful. But what is a cut away bog? One sliced open for the peat? And I think you are too narrow in your view of rhyme, Steve. I imagine there are dozens of scholarly works on this, so I know I'm in way over my head. But I hope there are no serious poets who stoop to the level of rock-era songwriters. " . . . went down to El Paso / Ran into a great big hassle." Steve Miller.

Mr. Miller: Hah! How could I have forgotten Steve Miller's innovative experiments in off-rhyme/near-rhyme? You have brought back fond, wonderful memories with good friends, circa 1978.

Yes, "El Paso/big hassle" is a natural progression from the type of rhyming that runs from Wilfred Owen through Auden and Kavanagh to "Take the Money and Run." And, by the way, we should not forget Steve Miller's famous neologism: "pompatus." As in: "pompatus of love."

As to "cut-away bog": I was befuddled, until Google arrived on the scene, and I found some images. You are right on the money.

Thank you very much for stopping by.