The following poem was written by Charlotte Mew when the enormity of the First World War had begun to sink in, particularly after the First and Second Battles of Ypres in the autumn of 1914 and the spring of 1915.  The first six lines are a moving evocation of the "grief" and "dread" of that time. But the final two lines turn the poem into something else entirely -- without minimizing that grief and dread.

Who thinks of June's first rose to-day?
Only some child, perhaps, with shining eyes and rough bright hair will
reach it down
In a green sunny lane, to us almost as far away
As are the fearless stars from these veiled lamps of town.
What's little June to a great broken world with eyes gone dim
From too much looking on the face of grief, the face of dread?
Or what's the broken world to June and him
Of the small eager hand, the shining eyes, the rough bright head?

Charlotte Mew, The Rambling Sailor (1929).  The second line is a single line, but does not appear as such due to margin limitations.

The phrases "What's little June to a great broken world" and "what's the broken world to June" are marvelous in and of themselves.  But the transformation that takes place during the movement from the first phrase to the second and onward to the close of the poem is remarkable. 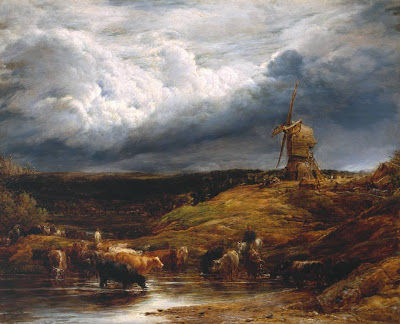 As I have noted before, Thomas Hardy was a great admirer of Charlotte Mew's poetry.  He, along with John Masefield and Walter de la Mare, took the initiative to obtain a Civil List Pension for her due to her lack of financial resources.  After learning that she had been awarded the Pension, she wrote a letter to Hardy thanking him for his efforts.  The letter reads, in part:

"It seems so generous -- unreasonable -- when -- from head to feet . . . I know myself to be unworthy of it.  I owe it to the amazing kindness of friends to most of whom I am practically a stranger -- and to the weight of great names -- with yours coming first.  I am told that I ought to be proud that you should have spoken for me -- indeed I ought -- But pride -- in that sense -- with me (I hope you will understand) -- is a sort of surprise and confusion -- a humbling but a touching thing.  What I do feel is gratitude and entire unworthiness.  And you will believe that I thank you from my heart." 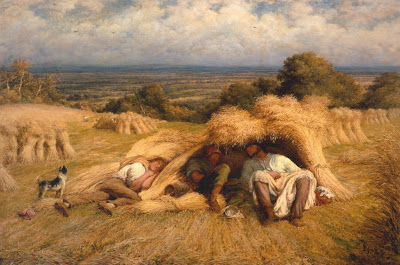 There are interesting parallels between the final two lines of Mew's "June, 1915" and Hardy's "In Time of 'The Breaking of Nations'."  Hardy's poem was first published in January of 1916.  However, it was written (according to the date appended to it by Hardy) in 1915.  Thus, Mew and Hardy were thinking similar thoughts, and putting them to paper, in the same dispiriting year.  And both of them were able to pull off a difficult-to-achieve trick:  placing things into a timeless perspective without slighting the ghastliness of what was currently taking place, and without abandoning empathy for those who were immediately affected by that ghastliness.

In Time of 'The Breaking of Nations'

I
Only a man harrowing clods
In a slow silent walk
With an old horse that stumbles and nods
Half asleep as they stalk.

II
Only thin smoke without flame
From the heaps of couch-grass;
Yet this will go onward the same
Though Dynasties pass.

III
Yonder a maid and her wight
Come whispering by:
War's annals will cloud into night
Ere their story die. 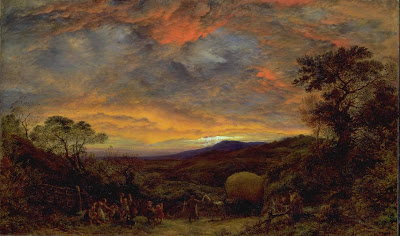 zmkc: you're welcome. I'm pleased that you liked it. As always, thank you very much for visiting.

I too found this a fine post. It made me think of the families of the children murdered in Newtown last fall -- how Christmas must have seemed to them. I guess there will always be something that poem could make you think about.
I just read a short biography of Charlotte Mew's unhappy but very creative life -- in the book I had when I took English Poetry in college in 1958. Now I'm going to read all of her poems that I can find in the house.
Thank you for making such a lost lady less lost.
Susan in NYC

Susan: I'm happy to hear from you again.

It is one of those poems that says something fundamental in an understated, but still powerful, fashion, isn't it? I'm glad that it has prompted you to visit her poetry again -- she deserves the attention. Yes, her life seems to have been a sad one. But at least she lived long enough to see her work praised by Hardy, Sassoon, and others. It must have offered some compensation.

Stephen: I'm so happy I found my way to your blog! (I did so while exploring Charlotte Mew's work and world, in preparation for an event I'm programming for NYC's Cornelia Street Cafe.) I'm especially moved to see the excerpt from her letter to Hardy. I first came across her name in a Hardy biography, and now I can't imagine life without her. (I felt the same when I discovered E.A. Robinson.) Thank you so much for your beautiful posts....Warm regards, Dee

Dee: I'm happy that you found your way here, and I hope that you'll return often.

Yes, Charlotte Mew's poetry is remarkable, isn't it? I agree with you about her letter to Hardy: very moving. As you probably know, the best edition of her poems is The Complete Poems, edited by John Newton. However (and, again, you may already be aware of it), I also recommend an earlier edition edited by Val Warner which contains selections from her prose. I recommend in particular a two-part essay about trees.

Thank you again for visiting, and for your kind words about the blog.

Hi Stephen -- I'm guessing you're probably not in NYC, but if you know anyone there who'd like to come to our tribute to Charlotte Mew on 11/17: https://www.facebook.com/events/604615872994563/?fref=ts
And here's the venue website: http://www.corneliastreetcafe.com/downstairs/Performances.asp?sdate=11/17/2014&from_cal=0
Her poetry deserves so much more attention, as you said, and I'm hoping that we have a full house of people who will discover her!
Thank you again for your lovely and invaluable blog....All best, Dee

Dee: Thank you very much for that update. You're right: I'm on the opposite coast! But I have gone to the Cornelia website and read about the event: it sounds delightful. (I hadn't seen that drawing of her before: thank you for that.)

You are doing a wonderful and selfless thing. I wish you all the best, and great success. I don't need to tell you that she deserves this recognition and attention. And I love the fact that it is, in part, a celebration of her birthday.

Thank you very much for the update, and for visiting again. And, if you are not too busy, please let me know how it goes.