Thomas Hardy was born on this date 173 years ago.  The year 1840 seems to belong to a long-lost world.  Wordsworth was still alive and writing poetry.  For some reason, it occurs to me that, in 1840, Abraham Lincoln was a 31-year-old lawyer in Illinois.  Imagine that:  Thomas Hardy and Abraham Lincoln and William Wordsworth were all alive at the same time. (It certainly makes our age seem paltry, doesn't it?  But that's another story.)

On the other hand, however, Hardy seems very close to us.  He died less than a 100 years ago -- in 1928, which doesn't seem so far away.  The living veterans of World War II were born before Hardy's death.  And think of this:  Philip Larkin was six-years-old when Hardy died.

Now, that is a wonderful piece of poetic continuity:  the lives of William Wordsworth and Thomas Hardy and Philip Larkin overlapped one another. 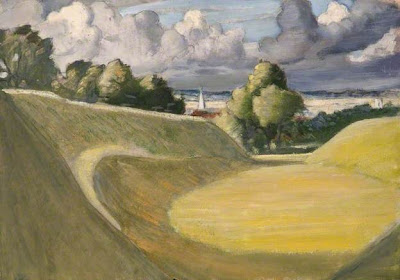 Is it birthday weather for you, dear soul?
Is it fine your way,
With tall moon-daisies alight, and the mole
Busy, and elegant hares at play
By meadow paths where once you would stroll
In the flush of day?

I fancy the beasts and flowers there beguiled
By a visitation
That casts no shadow, a friend whose mild
Inquisitive glance lights with compassion,
Beyond the tomb, on all of this wild
And humbled creation.

It's hard to believe a spirit could die
Of such generous glow,
Or to doubt that somewhere a bird-sharp eye
Still broods on the capers of men below,
A stern voice asks the Immortals why
They should plague us so.

Dear poet, wherever you are, I greet you.
Much irony, wrong,
Innocence you'd find here to tease or entreat you,
And many the fate-fires have tempered strong,
But none that in ripeness of soul could meet you
Or magic of song.

Great brow, frail frame -- gone.  Yet you abide
In the shadow and sheen,
All the mellowing traits of a countryside
That nursed your tragi-comical scene;
And in us, warmer-hearted and brisker-eyed
Since you have been.

Day Lewis's reference to Hardy's "bird-sharp eye" brings to mind Llewellyn Powys's memory of meeting Hardy in 1919:  "He came in at last, a little old man (dressed in tweeds after the manner of a country squire) with the same round skull and the same goblin eyebrows and the same eyes keen and alert.  What was it that he reminded me of?  A night hawk?  a falcon owl? for I tell you the eyes that looked out of that century-old skull were of the kind that see in the dark."  Edmund Blunden, Thomas Hardy (1941), page 159.  For those who may be interested, in previous posts I have mentioned the observations of Powys, H. M. Tomlinson, Blunden, and Siegfried Sassoon upon meeting Hardy in his late years. 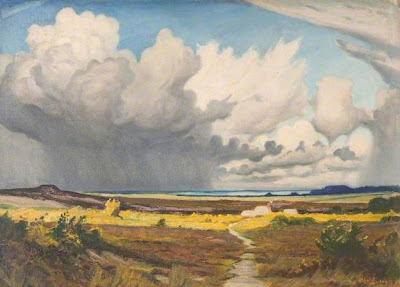 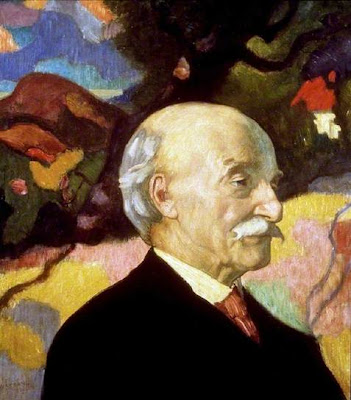 It is hard to believe that Hardy was born so long ago, but living into the 1920s, he was also one of those men who crossed some of the most remarkable times in human history, into the modern age. His poetry is so powerful, moving and contemporary. Oddly, I was VERY put off his prose by unfortunately reading Jude the Obscure (of all books!) when I was far too young, and it took me some time to get over that - I still have a hard time with his prose, but the poetry - extraordinary, even life-changing.

Thank you for this beautiful post.
The middle painting makes me think of Egdon Heath at the beginning of "Return of the Native".
Susan in NYC

Just discovered the J.L. Carr novella A Month in the Country, and there are strong echoes of (and even explitic references to) Hardy there. The book was published in 1980, but set in 1920. Makes me want to read Under the Greenwood Tree -- but also to see the 1987 film of Carr's book. Colin Firth and Kenneth Branagh seem at their best in period pieces.

Mr Pentz, thank you , both for the C Day Lewis poem which I did'nt know, and for the wonderful portait of Hardy by William Strang. A wonderful portrait.
It has often struck me what astonishing changes Hardy must have witnessed in his long life, from his birth in 1840 to his death in 1928 . It is difficult , I think for us to imagine how different those worlds were and for one man to have lived through them. I suppose there have been some fairly dramatic changes between now and my own birth in the early 1950's over an even shorter span of time!

Dear Stephen, thank you for this fine tribute to Hardy in words and pictures!
Until now I wasn't aware that Hardy shared his birthday with Edward Elgar! He was born exactly 17 years later but I think he was much more a man of the 19th century than Hardy was. However, both shared a deep nostalgia for things past coupled with a powerful creative energy which enabled them to create new things.

"Waiting both" has been movingly set by Gerald Finzi as part of his song cycle "Earth and Air and Rain".

Ms. Aykroyd: you make an excellent point about Hardy and his times, and how he remains contemporary. I suppose that that is one of the marks of truly "great" poets: their work is timeless, and ever relevant. And this, too: their work is about what it means to be a human. Hardy's poetry is as fresh now as it was a hundred years ago.

I always appreciate hearing from you. Thank you for visiting again.

Susan: It's good to hear from you again. I'm pleased that you liked the post.

Yes, I wonder what part of Dorset Hardy had in mind when he wrote of Egdon Heath -- I suppose there must be quite a few candidates. I'm sure that some enterprising scholar has tracked that down.

Mr Miller: that's a wonderful book, isn't it? As you may know, the movie (which was wonderful as well) is the subject of a minor cult following (in a good sense). I tried to obtain a copy of it a few years ago and discovered the story of its virtual disappearance, and the efforts being made to preserve it and to make it available again. I hope that they are successful. Both Branagh and Firth were very good in it, and I think that it captures very well the emotional tone of the book (as well as the rural atmosphere). I can see the Hardy connection that you refer to.

As you probably also know, J. L. Carr was a very interesting character. If you haven't come across it yet, I recommend Byron Rogers's biography of Carr: The Last Englishman.

Thank you very much for stopping by again -- I'm happy to hear from you.

Mr Ashton: Yes, his life span really hit home for me when I realized that he and Wordsworth's and Lincoln's lives overlapped -- and then he lived on through the First World War and well past it! As you say, the changes he saw were enormous.

But through it all, as I suggested in my response to Ms Aykroyd's comment, he always seemed to remain contemporary -- and he still remains so.

If you haven't already read it, I recommend Thomas Hardy Remembered, which was edited by Martin Ray. It collects a number of reminiscences of people who met Hardy at various points in his life. From it, you get a real feeling for what a remarkable man he was.

Thank you very much for your thoughts, and for visiting again.

Mr Richter: it is very nice to hear from you again. Thank you for the kind words about the post.

I wasn't aware that Hardy and Elgar shared the same birthday -- thank you for that. Although I am only a little bit familiar with Elgar's work, I know what you mean about what he shares with Hardy, based upon what I have heard.

Thank you as well for letting me know about Finzi's setting of "Waiting Both." I wasn't aware of it, and I will track it down.

I liked your reflection upon the fact that Lincoln, Wordsworth and Hardy were all alive at the same time - it reminded me of when I was at school, reading the poems of Emily Dickinson, and encountered her description of Emily Bronte: "gigantic Emily Bronte". "Imagine that", my teacher said to our enthralled faces, "Emily Dickinson's and Emily Bronte's lives overlapped" (Dickinson being 18 when Emily Bronte died in December 1848).

I always look forward to reading your posts - many thanks.

Jessica: thank you very much for visiting, and for your kind words.

I appreciate your pointing out the overlapping lives of Bronte and Dickinson. Also, I hadn't heard Dickinson's description of Bronte before: very nice!

C. Day Lewis, whose poem you include above, is buried at Stinsford, a few yards from the grave where Hardy's heart and wives lie.

archy: thank you for reminding me of that -- I had forgotten about it. It makes sense given Day Lewis's admiration for him, which is apparent both from the poem above, and from his essays on Hardy.