Today was -- I'm afraid there is no other way to put it -- A Glorious Autumn Day.  Not a cloud in the sky.  The barest wisp of a wind.  The trees are half-empty, save for the Japanese maples, which are at their bright red brilliant peak.  On my afternoon walk, the only sounds were the cluck and chirp of birds in the distance and the rustle and crackle of leaves underfoot.

All seemed still and unchangeable.  I was doing my best to keep my mind empty, in deference to the World.  But some lines by Wallace Stevens appeared:  "He wanted to feel the same way over and over. . . . He wanted his heart to stop beating and his mind to rest/In a permanent realization." But, of course, that is not in the cards.  There shall be no walking beside the river, "under the buttonwoods, beneath a moon nailed fast."  For which we should be thankful.

Upon returning, the following poem by Thomas Hardy came to mind.  It has appeared here before, but, as I am wont to say of poems that I like:  it bears revisiting. 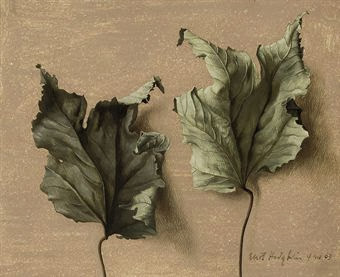 On a first reading, the following poem by C. H. Sisson is not as easily accessible as Hardy's poem.  However, it is worth the effort to puzzle it out.

Leaves are plentiful on the ground, under the feet,
There cannot be too many, they lie below;
They rot, they blow about before they are rotted.
Were they ever affixed to trees?  I do not know.

The great connection is from the leaf to the root,
From branch, from tendril, to the low place
Below the burial ground, below the hope of the foot,
The hand stretched out, or the hidden face.

On all occasions, or most, remember this:
Then turn on yourself like a small whirlwind of leaves.

Yellow tunnels under the trees, long avenues
Long as the whole of time:
A single aimless man
Carries a black garden broom.
He is too far to hear him
Wading through the leaves, down autumn
Tunnels, under yellow leaves, long avenues. 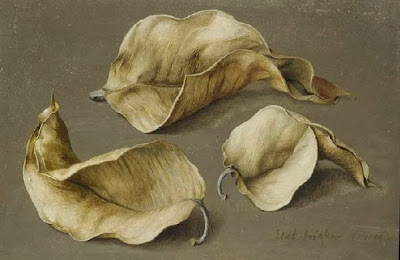 Mr Pentz, it is almost exactly that kind of a day here too. After a very stormy day on Monday of high winds and rain, today is, as you say glorious. Cloudless skies, bright autumn sunlight, carpets of yellow, red and tan leaves underfoot. No maples here, but I did see two magnificent fiery-red examples on Sunday while walking in Surrey.
I like the lines of Wallace Stevens and the Grigson piece, both unfamilair to me.
Autumn in King's Hintock Park is one of my favouriter Hardy poems and the Sisson piece will require more than one reading, but as you say the last two lines are quite wonderful.
Thank you as always for posting old favourites and introducing poems entirely new.

Such thought-provoking poems this morning! I sense a common thread in all four (including the Stevens prompt) of engaging in the age-old question: how does a poet - wide-open to and filled by external perception - exist? For Stevens, the only way to know oneself is to stop time, by stilling perception that always flows away with what is (and paradoxically in Stevens , because it is not self, is not). Hardy finds, in all of the autumn releasing of life and existence, a strange comfort, barely noted in the poem, that he exists because he will be missed (his raking leaves will be at any rate, no symbolism there!) In Sisson, existence (more traditionally religious than poetic) lies in the invisible, to "turn back in oneself" is to acknowledge that perceptions gave an answer that was later negated by new perceptions - that need for stillness again, as in a meditative centering. The Grigson poem is more oblique, suggesting one so lost in perception he cannot perceive himself in the scene. Again, the consciousness of the poet is charged in relation to the intense autumnal releasing.

Frost, who knew as did Stevens and Keats, that "nothing gold can stay" (and as you say, it's a good thing) says this about his walking the leaf-strewn landscape of autumn (see below). Frost understands that nature has given him a reprieve, and he is grateful for it, but he knows, as do we, that one day the leaves will lie atop us, not merely hiss at us as we wade through them on some bright afternoon deep into bedizened October.

I have been treading on leaves all day until I am autumn tired
Lord knows all the color and form of leaves I have trodden on and mired
Perhaps I have put forth too much strength or been too fierce from fear...
I have safely trodden underfoot the leaves of another year
All summer long they were overhead more lifted up than I
To come to their final place in earth they had to pass me by
All summer long I thought I heard them whispering under their breath
And when they came it seemed with a will to carry me with them to death
They spoke to the fugitive in my heart as if it were leaf to leaf
They tapped at my eyelids and touched my lips with an invitation to grief
But it was no reason I had to go because they had to go...
Now UP MY KNEE to keep atop another year of snow.

Two more fresh poems for me - and I really should dip into Hardy's poems more thoroughly (it sits beside me on the desk).

I found it when I was thinking - Did Hardy do one of his linkings of real names and made up ones (I was thinking of King's Stag, up near Sturminster Newton in Dorset.) Anyway, you now have a picture of the gates at King's Hintock Park - but I still think the name a flight of fancy . . .

You've mentioned Frost's "Leaf-Treader" before, I think, and it always comes to mind at this season.

Classicist that he was, I wonder if Frost had this favorite passage from Book VI of the Iliad in mind, here in Pope's translation:

Like leaves on trees the race of man is found,
Now green in youth, now withering on the ground;
Another race the following spring supplies;
They fall successive, and successive rise:
So generations in their course decay;
So flourish these, when those are pass’d away.

Mr Ashton: as always, thank you for the thoughts. It's good to hear you're enjoying similar weather, which we should enjoy while we can!

Yes, I am very fond of "Autumn in King's Hintock Park" as well. I think that Hardy is one of the very few poets who can get away with writing a poem where he inhabits the character of an elderly woman. (Which, come to think of it, he also does in "The Farm-Woman's Winter," which I recently posted.) He can do so, I think, because of his compassion for, and his ability to empathize with, others. He may well have been a "pessimist" about our fate as human beings, but he never surrendered his compassion and his empathy. And from all that I have read of him, he was a kind and self-effacing man.

Mr Sigler: as usual, you are able to tease out threads and make more connections than I am capable of! Which I always appreciate, since it provokes me to dig deeper.

I particularly like your thought about Hardy finding "a strange comfort" in autumn. For all of its sadness, I find that to be true of autumn. The repeated refrain "Raking up leaves" supports your thought: it lends a kind of restfulness and timelessness to the scene. At least it does for me. "Earth never grieves!" sums it up well, doesn't it? Nor should we.

As for Stevens, I think that at the end of his life he gave up on the effort to "stop time" and "still perception," don't you? For instance, I think of "The River of Rivers in Connecticut": "The mere flowing of the water is a gayety . . . call it, again and again,/The river that flows nowhere, like a sea." This doesn't mean that the Imagination ceases its activity, but Reality (the river) is paramount. At least that's how I look at where he eventually arrived at.

Anonymous: thank you very much for "A Leaf Treader." I have always liked the way Frost declines the "invitation to grief" (a lovely phrase) at the end. But he is aware of where we will all come to.

Thank you for the poem, and for your thoughts.

Here is some additional information: "King's Hintock Park is the park of the Earls of Ilchester, adjoining Melbury Osmund. . . . Hardy wrote [in a letter to Edmund Gosse] that 'It happened in Lady Londonderry's daughter's park at Melbury.'" J. O. Bailey, The Poetry of Thomas Hardy: A Handbook and Commentary, page 207.

Thank you for stopping by again. I'm pleased you liked the poems.

Bob: thank you for the reference to "A Leaf Treader," which, as you'll note above, Anonymous had in mind as well.

And thank you indeed for the passage from Pope's Homer: wonderful! I had never read the lines before. You've reminded me of yet something else that I have never gotten around to reading, but need to.

It would be nice if Frost's poem had its source -- consciously or unconsciously -- in Pope's lines, wouldn't it? As you say, given Frost's knowledge, I wouldn't be surprised if Pope is in the background.

Again, thank you very much. As always, it's good to hear from you.