Long-time (and much-appreciated!) readers of this blog may recall that I have a May poem (Philip Larkin's "The Trees") and a November poem (Wallace Stevens's "The Region November").  Although my reading of poetry is a matter of happenstance, I do like the thought of having certain seasonal stepping-stones.  I did not go in search of them, but now, annually and reliably, they await me.

The following poem is my April poem.  Given the climate of the Pacific Northwest, the odds are not long that I will visit "Wet Evening in April" on a wet evening in April.  And so it is.

I cannot say enough about the beauty of this poem.  Which means that I should keep my mouth shut. 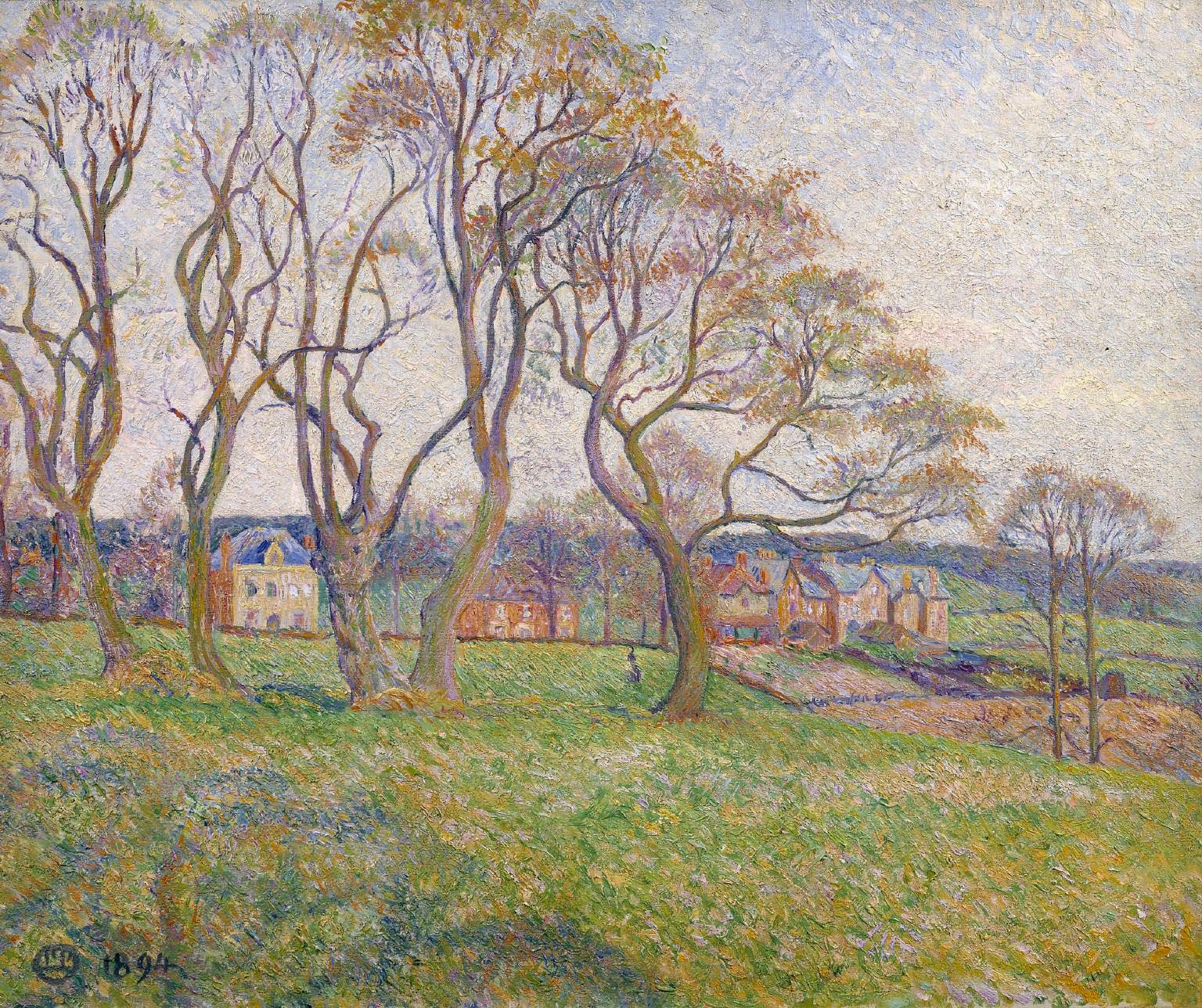 March, April, and May:  they are not as wistful as September, October, and November, but they still have a high wistfulness quotient.  Last week I was walking down a city street when, after a gust of wind, the air was suddenly filled with white and pink cherry blossom petals.  For just an instant I thought they were snow flurries (usuyuki in Japanese -- a lovely word). 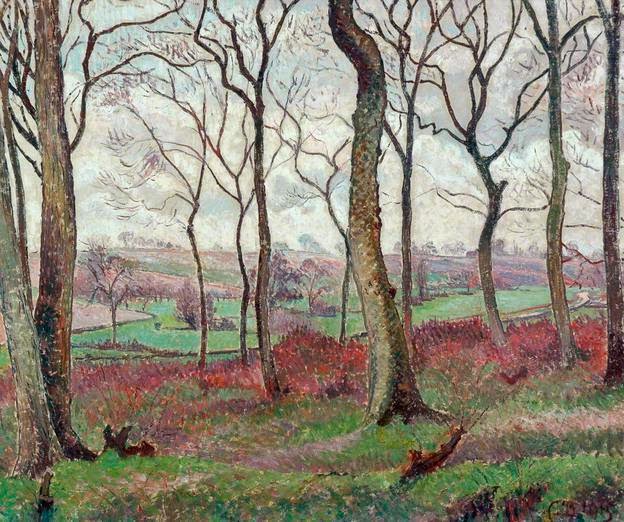 Of course, we ought not to get carried away in wistfulness, like the moon on a wave.  Which is not to say that wistfulness is a bad thing.  One can be wistful and perfectly content.  Some occasions call for it.  To wit:  standing in place as cherry blossom petals (and, in due time, sere leaves) spin down to the ground all around you.

That man's life is but a dream --
Is what we now come to know. 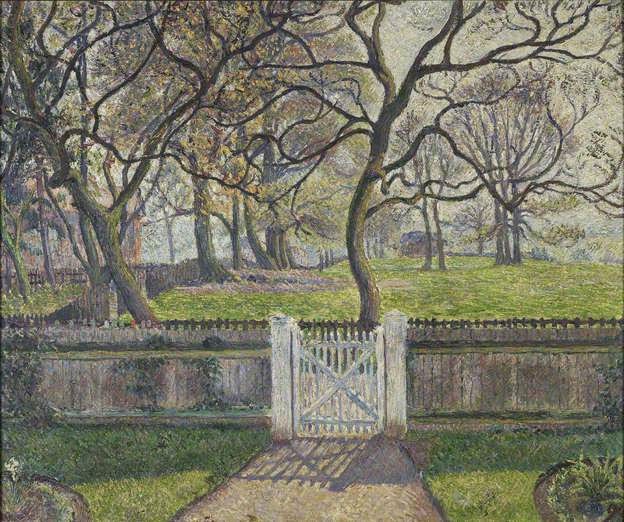 Oh how beautiful these are! The Kavanaugh brings tears.
I know how obvious this seems, but Eliot's "The Wasteland" rolls into my head every April, ..."the cruelest month" and his hyacinth garden. For me, the 73rd Sonnet is November's poem. It's those season turning months, isn't it?
Mary

Mary: I'm happy you liked the poems. Yes, "Wet Evening in April" is very good, isn't it? A great deal in four lines.

I always think of Eliot as well this month. Although, having been born in April, I'm reluctant to think of April as "the cruellest month"! And I agree that "That time of year thou mayst in me behold . . . " is a perfect poem for November.

Blackbirds were singing all day yesterday. The sound was so beautiful it hurt. So I agree with you that April does have a certain melancholy to it.

I also relate to your April poem. I live in the NW of the UK and it rains a lot here too!

Janet: thank you very much for visiting and commenting. Lucky you, to have heard the blackbirds singing! Yes, a certain melancholy, perhaps -- but in a good, wistful sense, I think.

As for the rain: you get used to it, don't you? Until at times you come to miss it (believe it or not) when it hasn't rained for a while. Or so it is with me.

Wonderful, the Kavanagh 'Wet Evening'. I had never heard it. wonderful to be 53 and hearing poetry for the first time too.

I am going to copy it for my funeral poetry pages, with thanks,

I am just back from teaching an ESL class. I have taken lately to ending the class with a poem--I read it through first, then the students follow me through it. Tonight we read "The Concord Hymn", which gives April a mention in the second line.

Good to see these Lucien Pissarro paintings. So similar is his style to his father's that I thought they were some I had not seen before. Which of course is true!

Tim W: I'm pleased you liked the Kavanagh poem. As for discovering new poetry: it is something that can happen at 53 or 93 -- one can only hope.

George: Yikes! I shudder to think how long it has been since I was first introduced to that. But, yes, there it is: "Their flag to April's breeze unfurled."

Thank you for the reminder, and for stopping by again.

Mr Hart: yes, I think this is particularly true with respect to "April, Epping" and "The Garden Gate, Epping." I've always thought it was wonderful to have Lucien Pissarro bring the Impressionist style to the English countryside, but modifying it in the process.

Stephen, (if I may), I agree. There is a strong graphic underpinning to these paintings – and a pleasing colour language – and no sense that he was inhibited by his father. But, Camille was a great and generous encourager – as fully acknowledged by Cézanne. It seems to me extraordinary that so little has been written about him, and that nothing is currently in print. I’m thinking of writing a blog about him. That would be an infinitesimally small redressing of the balance, but no matter . . . Peter

Peter: thank you very much for the follow-up comment.

Yes, it is odd that more has not been written about his paintings, isn't it? Because I have a long-standing interest in the fine press/small press movement in England in the late-19th and early-20th centuries, I first came across his work as the founder of the Eragny Press, to which he contributed engravings. (This connection makes very apt your comment about the "strong graphic underpinning" to the paintings.) His Eragny Press engravings led me to his paintings.

It would be wonderful if you pursue your blog idea. Your effort would NOT be "infinitesimal": one never knows where these things lead. And anything any of us can do to preserve, and call attention to, the things we love has value. Or so I believe.