Yearning is one of the defining characteristics of the poems written by the Decadent poets of the 1890s.  I will state at the outset that I find nothing wrong with yearning per se.  It is the twin of hope (albeit with more of an edge of desire and longing), which Samuel Johnson was wont to identify as an essential feature of what it means to be human.

For me, at least, the yearning of the Nineties poets is yearning at its best. Resigned, yes; melancholy, yes; but, for the most part, not querulous.  This is in contrast to our modern world, in which the yearning is whiny, and all about things.  The Decadent poets were not materialists.  Their yearning was romantic and spiritual and aesthetic.  I cannot fault them for this.  Did they sometimes take their yearning too far?  Perhaps.  But better that than, say, placing one's faith in Science and Progress and Politics.  We can all see where that has gotten us. 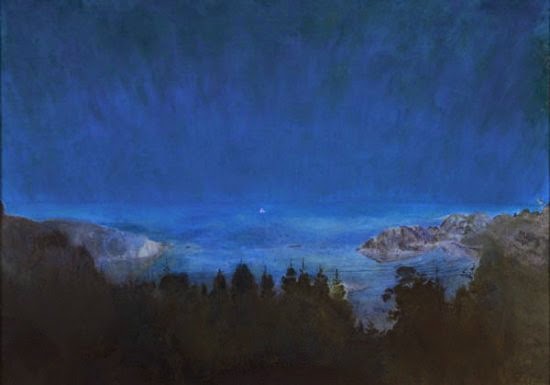 Beyond the need of weeping,
Beyond the reach of hands,
May she be quietly sleeping,
In what dim nebulous lands?
Ah, she who understands!

The long, long winter weather,
These many years and days,
Since she, and Death, together,
Left me the wearier ways:
And now, these tardy bays!

The crown and victor's token:
How are they worth to-day?
The one word left unspoken,
It were late now to say:
But cast the palm away!

For once, ah once, to meet her,
Drop laurel from tired hands:
Her cypress were the sweeter,
In her oblivious lands:
Haply she understands!

Yet, crossed that weary river,
In some ulterior land,
Or anywhere, or ever,
Will she stretch out a hand?
And will she understand? 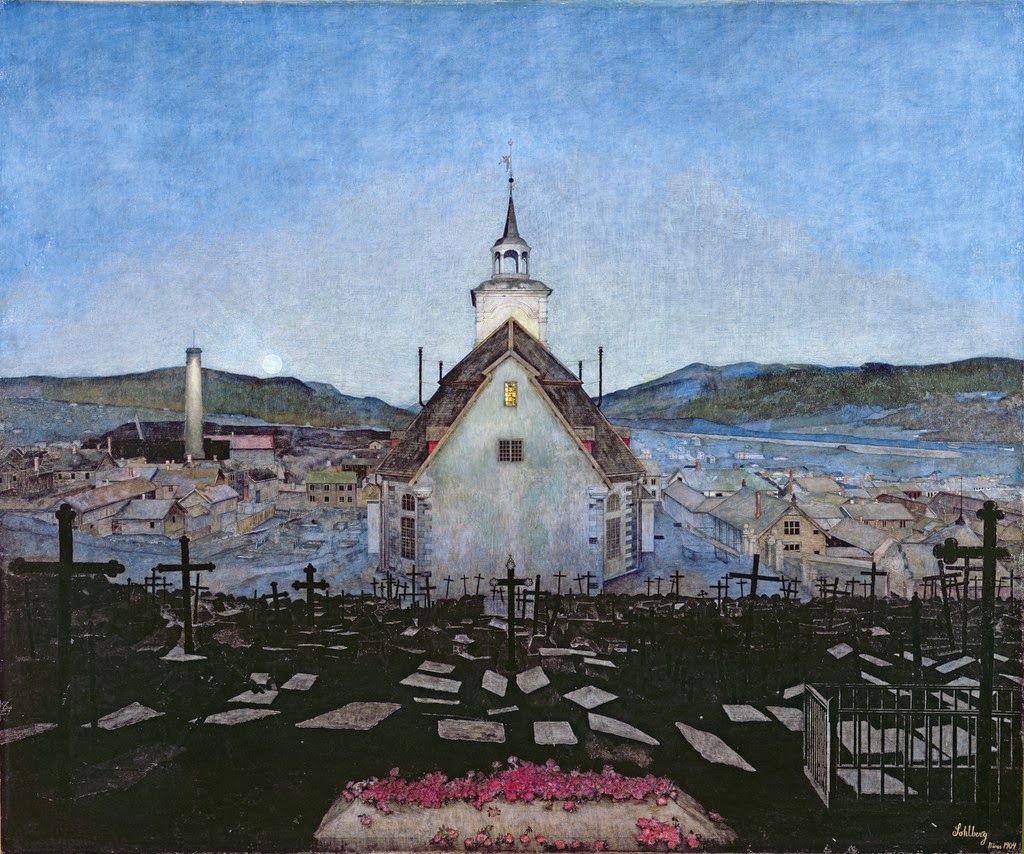 On the other hand, we mustn't think that the late-19th century was all of a piece.  Consider, for instance, this:

I have trod the upward and the downward slope;
I have endured and done in days before;
I have longed for all, and bid farewell to hope;
And I have lived and loved, and closed the door.

Robert Louis Stevenson, Songs of Travel and Other Verses (1896).

One is not likely to think of Stevenson as a dreamy Nineties aesthete. There is a note of fortitude sounded here which one seldom finds in the Decadent poets.  Bear in mind that Stevenson, given his poor health, was always staring Death in the face.  He is certainly entitled to invoke some Decadent fatalism and melancholy.  And perhaps he does, just a bit:  "I have longed for all, and bid farewell to hope."  But overall the tone is resolute -- similar to that of his "Requiem" (which has appeared here previously):  "Glad did I live and gladly die,/And I laid me down with a will."

Moreover, Stevenson was willing to allow for the attainment, however brief, of Paradise on Earth.

Fair Isle at Sea -- thy lovely name
Soft in my ear like music came.
That sea I loved, and once or twice
I touched at isles of Paradise.

A small poem, a slight poem some might say, but I can never get over its loveliness. 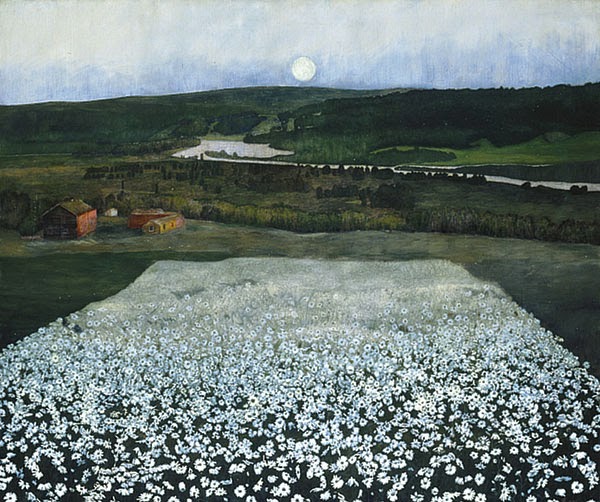 Robert Louis Stevenson was indeed a yay-sayer to life. Perhaps his essay "Aex Triplex" is his beat attempt to understand both the mysteries of life and of death. The essay is ostensibly about death, but in fact it is about how to live a life with the prospect of death lying ahead. Stevenson, his own death sentence hanging over him, was a doughty soul.

Stevenson's essay reminds me of Strether's, in James's "The Ambassadors," enjoining his young auditor to live fully.

I have included the last paragraph of Stevenson's essay. The last paragraph might be Stevenson's credo, It's a bold one, uplifting--the idea of burning one's life out, living fully, courageously, flaming in the darkness, a bright, hot blaze, no ignominious skulking and trying to hide from Death, no pusillanimous brooding constantly about the ineluctable fate of death.

And, after all, what sorry and pitiful quibbling all this is! To forego all the issues of living in a parlor with a regulated temperature as if that were not to die a hundred times over, and for ten years at a stretch! As if it were not to die in one's own lifetime, and without even the sad immunities of death! As if it were not to die, and yet be the patient spectators of our own pitiable change! The Permanent Possibility is preserved, but the sensations carefully held at arm's length, as if one kept a photographic plate in a dark chamber. It is better to lose health like a spend-thrift than to waste it like a miser. It is better to live and be done with it, than to die daily in the sickroom. By all means begin your folio; even if the doctor does not give you a year, even if he hesitates about a month, make one brave push and see what can be accomplished in a week. It is not only in finished undertakings that we ought to honor useful labor. A spirit goes out of the man who means execution, which outlives the most untimely ending. All who have meant good work with their whole hearts, have done good work, although they may die before they have the time to sign it. Every heart that has beat strong and cheer-fully has left a hopeful impulse behind it in the world, and bettered the tradition of mankind. And even if death catch people, like an open pitfall, and in mid-career, laying out vast projects, and planning monstrous foundations, flushed with hope, and their mouths full of boastful language, they should be at once tripped up and silenced: is there not some-thing brave and spirited in such a termination? and does not life go down with a better grace, foaming in full body over a precipice, than miserably straggling to an end in sandy deltas? When the Greeks made their fine saying that those whom the gods love die young, I cannot help believing they had this sort of death also in their eye. For surely, at what-ever age it overtake the man, this is to die young. Death has not been suffered to take so much as an illusion from his heart. In the hot-fit of life, a-tiptoe on the highest point of being, he passes at a bound on to the other side. The noise of the mallet and chisel is scarcely quenched, the trumpets are hardly done blowing, when, trailing with him clouds of glory, this happy-starred, full-blooded spirit shoots into the spiritual land.

Anonymous: thank you very much for sharing the passage from "Aes Triplex," which I agree is a wonderful essay. As is "Pulvis et Umbra," written later, which I think of as a companion piece. I also agree that Stevenson was, as you say, "a doughty soul."

The Stephenson poem is indeed very fine. i particularly like the idea of "touching" or "touching at" islands. I don't know if this is a standard nautical or traveler's term for a brief stop or a glimpse; Stephenson himself would surely have known it if it were. But it reminds me of the lines in Tennyson's Ulysses:
"It may be that the gulfs will wash us down:
It may be we shall touch the Happy Isles,
And see the great Achilles, whom we knew."
A similar meaning and a similar delicacy, I think.

Sam Vega: thank you indeed for the reference to "we shall touch the Happy Isles" in Tennyson -- it is a wonderful correspondence. I wouldn't at all be surprised if Stevenson was consciously or subconsciously echoing it in his poem, given how pervasive Tennyson's presence was for the Victorians.

I completely agree that "touching at" or "touching" isles is a wonderful way of putting it. As you say, "delicate" and lovely.

It is always nice to hear from you. Thank you for visiting again.