I recently stumbled across a movie that I hadn't seen in years:  Foreign Correspondent, which was directed by Alfred Hitchcock.  Although it was originally released in August of 1940, when the war had already begun, it has an atmosphere that is similar to (though lightened up by Hollywood) the pre-war Eric Ambler novels of that time:  Background to Danger, A Coffin for Dimitrios, and Cause for Alarm.

It is entertaining, witty, and -- to borrow a word from my previous post -- charming.  I will risk being found out as a curmudgeon by saying:  "They don't make movies like that anymore!"  Well, they don't.

One of its best scenes takes place outside and inside a clattering windmill located on a wide, windy plain, beneath a louring sky, in the Dutch countryside (i.e., in a studio in California).  Why do I bring this up? Because I highly recommend both the scene and the movie.  And because it provides a segue (however tenuous) to two poems about windmills by Arthur Symons, one of Ernest Dowson's fellow Decadent poets. 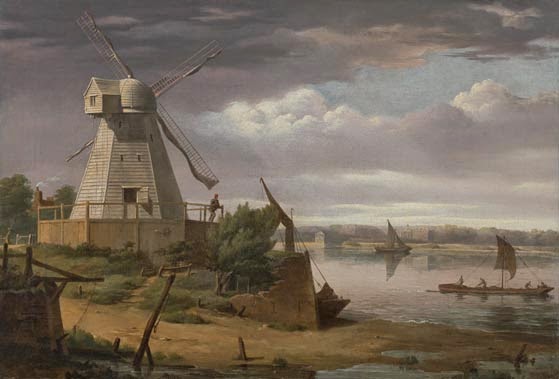 The day is enough for delight;
Why, as I lie on the grass,
And watch the clouds as they pass,
Do I reason of wrong and right?

Only to be, and the breath
I take is all that I need,
Were I but as the flower and weed
That live without thought of death.

But death and right and wrong,
As the windmill turns on the hill
Turn like a burden still
That I cannot cast out of my song.

Symons wrote "The Windmill" in 1906 at the age of 41.  Thus, it does not have the youthful melancholy and the free-floating romantic longing that one finds in the typical poems of the Nineties.  The century had turned.  The moment had passed.  And Symons was three years away from a severe mental breakdown. 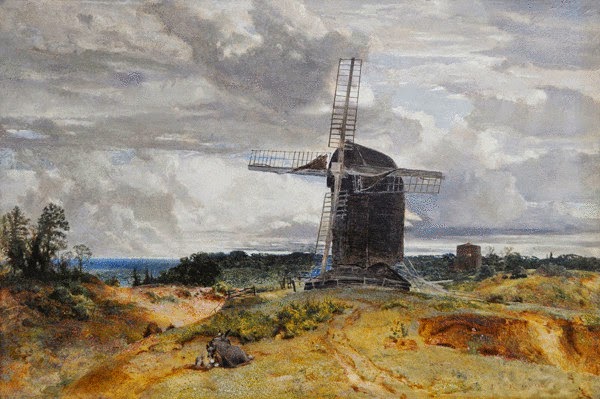 The character of the Nineties is, I think, evident in the sound and rhythm of the poem.  For instance:  "And an old thought turns with the old tune in my head/As a windmill turns in the wind on an empty sky."  Note that the final line is a repetition of the second line.  These sorts of repetitions are a typical feature of Nineties poetry:  the Decadents were fond of repeating words, phrases, and lines within a poem in order to create a sonorous, dreamlike flow.

And this is wonderful:  "Dreaming awake in the night on my lonely bed."  A line such as this could almost be viewed as a parody of the Decadent worldview.  "Dreaming awake"!  But, as I have noted before, I can't help myself:  I have a genuine, wholly unironic fondness for the poets of the Nineties. 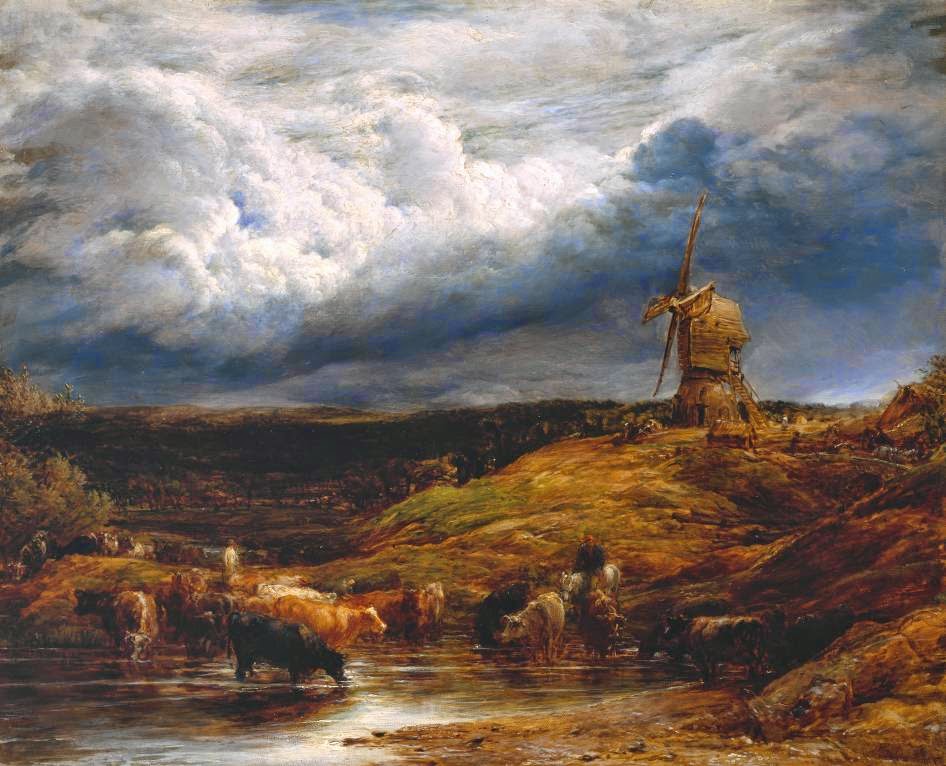 Thank you for this beautiful post. "Foreign Correspondent" is a personal favorite of mine, the more so as it is loosely based on the remarkable memoir "Personal History" by pioneering foreign correspondent Vincent Sheean, for which the film company had acquired the rights. In fact, the plot of the finished film has no relationship whatever to Sheean's book, except in that the protagonist is a prophetic witness to pivotal historical events.

There is another, recent movie about a windmill: the Polish-made film, The Mill and the Cross, which is based on Pieter Bruegel the Elder's 1564 painting The Procession to Calvary, set against the backdrop of the duke of Alba's savage suppression of the Calvinist and Anabaptist movements in the Netherlands. Windmills can certainly serve as potent symbols -- a certain Spanish novel immediately comes to mind.

Ellen: thank you very much for visiting, and for your comment.

And thank you for mentioning The Mill and the Cross: actually, I had thought about referring to it in the post, but I thought the post was getting too long. A commenter here mentioned the movie to me a few months ago in another context, and I then watched it: strange and wonderful. The windmill in The Mill and the Cross is something to behold, isn't it? All that creaking and rumbling!

I appreciate the additional background that you provided on the source of Foreign Correspondent. I wasn't aware of that.

Stephen – This is not a response – though that may follow, as I've yet to read this blog – but you probably remember my mooting a blog on Lucien Pissarro. I almost certainly would have written such, but your blog has changed the way I go about writing mine. I hasten to explain! I used to write long blogs – for example, 756 words on Cézanne; 1,984 on churchyard gravestones. I would normally spend two days on these – and I much enjoyed these ‘exercises’ – but the time taken is too much. So, while no way copying your format, your inclusion of three paintings gave me the idea of writing three short pieces on different subjects. These take only half a day to write, and I’m enjoying the freedom it gives me to muse on a range of topics. http://www.peter1arnold1hart.blogspot.com/ (Easier just to Google ‘peter hart notes boundary’)

I’ve just come across your blog ‘John Cowper Powys: “In a Hotel Writing–Room“ ‘, and realise that I had read this lovely poem before somewhere. You are right in saying that his poetry is on the whole disappointing – but how magnanimous and great–souled is he in his other writings!

I’ve tried to set my blog response so that I can check before publishing, but without success. So I give you my email – not with the slightest intention of bothering you over and above posting comments on your blog: once or twice a year you might hear from me! peter.hart65@gmail.com
All best, Peter

Different century, different medium, different energy, maybe even a little superficial for this current mood, Stephen? Still, I share today in the hopes that you and others catch a whiff in the wind of their similarity of theme...

Round,
Like a circle in a spiral
Like a wheel within a wheel
Never ending or beginning
On an ever-spinning reel
Like a snowball down a mountain
Or a carnival balloon
Like a carousel that's turning
Running rings around the moon
Like a clock whose hands are sweeping
Past the minutes of its face
And the world is like an apple
Rolling silently in space
Like the circles that you find
In the windmills of your mind

Keys that jingle in your pocket
Words that jangle in your head
Why did summer go so quickly?
Was it something that you said?
Lovers walk along the shore
Leave their footprints in the sand
Is the sound of distant drumming
Just the fingers of your hand?
Pictures hanging in a hallway
Or the fragment of this song
Half-remembered names and faces
But to whom do they belong?
When you knew that it was over
You were suddenly aware
That the autumn leaves were turning
To the colour of her hair?

Rex Harrison's son Noel sang the original version of Windmills of Your Mind that was used in The Thomas Crown Affair. The song's haunting quality has drawn many fine artists to record it, and in several different languages.

Here's one of my personal favourites, sung as the backdrop to yet another artistic medium.
http://www.youtube.com/watch?v=5q3y5jYZ6V4

All this has me musing on the alchemy set in motion when poetry enters into relationship with another artistic domain. I enjoy and return often to your blog in part because of your own thoughtful blending and matching of image with word...

For me that theme of the never ending 'circle in a spiral' comes into relief when I compare the young Noel Harrison performing his Oscar winning version of this song with another appearance he made more than forty years later at Glastonbury, less than two years before he died. I don't think it is only because it is in an advert free zone that I find a touching authenticity in the second rendering...

as always, sending you gratitude and warm wishes, dear Stephen

Peter: I understand the attraction of shorter posts: and the number 3 is a good one. (Over which I have no monopoly, by the way!) Although this blog never has been, and never will be, a chore or an obligation, it does involve a commitment of time. And I find that shorter posts on a narrower topic work well for my attention span!

By the way, I loved your three short posts on May 17. The image of the Emerson book with handwritten notes by the prior owner is wonderful.

As for John Cowper Powys, I am not as familiar with his fiction and non-fiction as I wish I was. He, Llewelyn, and Theodore are all remarkable (and remarkably eccentric) characters in their own right, aren't they?

As ever, thank you very much for stopping by, and for your thoughts.

midi: Wow! Thank you very much for all of this.

First: none of it is "superficial" at all. It fits perfectly with -- and expands and transforms -- the theme of the post. (And I will age myself by noting that I remember well the appearance of this song in the last century.)

Second: the versions you have provided links to are wonderful. Thank you very much for making the effort to share them. I wasn't aware that Dusty Springfield had sung the song: she is marvelous, as usual. And I agree that Noel Harrison's rendition at Glastonbury is quite touching -- as you say, a "circle in a spiral" indeed.

And, finally, thank you for the kind words.

It is always a pleasure to hear from you.