"But Well To Say And So To Mean, That Sweet Accord Is Seldom Seen"

I recently posted here a few poems by Robert Herrick from his Hesperides. Since then, I have continued to wander amongst the 1,130 poems in that volume.  (I didn't count them!  They are numbered in the edition that I am reading.)  A book consisting of more than a thousand poems may sound forbidding, but the entire enterprise is airy, light (albeit with some darkness here and there), delightful, and -- above all -- wise.

Each time that I read Herrick, I come away with a refreshing and invigorating sense of having encountered the world and its denizens in all of their variety.  Here is but a tiny instance.

To safe-guard Man from wrongs, there nothing must
Be truer to him, than a wise Distrust.
And to thy self be best this sentence known,
Hear all men speak; but credit few or none. 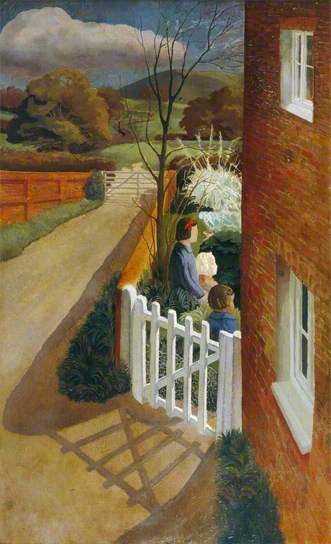 Herrick's poem brings to mind this:

Throughout the world if it were sought,
Fair words enough a man shall find;
They be good cheap, they cost right nought,
Their substance is but only wind.
But well to say and so to mean,
That sweet accord is seldom seen.

This has long been one of my favorite poems, no doubt for its music.  It is one of those poems that you inadvertently have in your memory after having read it a few times.  As an example of pure poetry, it falls into the same class (for me at least) as Wordsworth's "A slumber did my spirit seal," upon which I have apostrophized on a previous occasion. 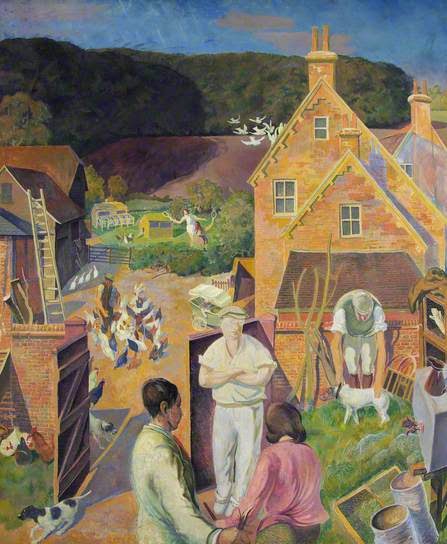 In offering these poems, I do not have in mind the private sphere.  I am merely in one of my periodic grouches about the disingenuous dissembling that goes on in the public sphere.  I turn to the following poem whenever I fall into this mood.

There's nothing happening that you hate
That's really worthwhile slamming;
Be patient.  If you only wait
You'll see time gently damning

Newspaper bedlamites who raised
Each day the devil's howl,
Versifiers who had seized
The poet's begging bowl.

The whole hysterical passing show
The hour apotheosized
Into a cul-de-sac will go
And be not even despised. 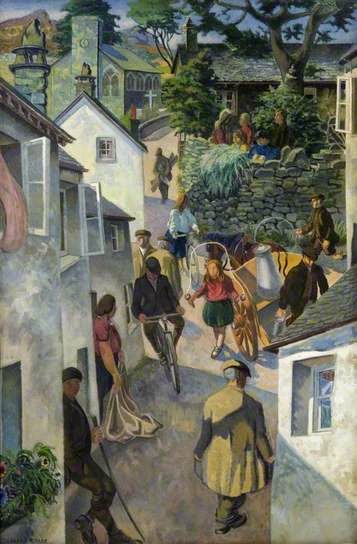 Mr Pentz, Such a delight to see Herrick here again. I like your choice of the word invigorating, it seems entirely appropriate when used in connection with Herrick. Many years ago I read a novel by the English writer Rose Macaulay entitled They Were Defeated in which Robert Herrick along with some other Cavalier poets; Sir John Suckling and Abraham Cowley were significant characters, and though I read it many years ago I remember it as a good read. I'm sure it is long out of print but it may be possible to track down as a second hand copy if you are at all interested
The Gilbert Spencer paintings are also a delight. Thank you

I had to laugh when I read Kavanagh's poem, "Leave Them Alone."

I used to be a news junky many years ago. I got the newspaper, a weekly news magazine (Time,Newsweek, etc.) and World Atlas (news printed in foreign countries)and would read them assiduously and get upset at the appropriate places and events.

I continued this when I went back to grad school. However, I had some very important exams coming up with an extensive reading list, and I had to skip my daily fix of news for several months.

After the exams were over, I went to the pile of mags, etc. determined to catch up with the world. As I began reading news of crises, catastrophes, political disasters, and the like, I was amazed to find that I had known none of this and that I had noticed no difference in my life as a result of these crises, etc.

As a result, I let my subscriptions to various news sources run out. As I'm on the Net, I can't avoid the crisis oriented headlines, but I now choose to let them go by and not delve deeply into them.

Kavanagh has it right. Unfortunately, I lapse at times, but I'm working on that.

Mr. Ashton: thank you for the reference to the novel by Rose Macaulay, which I was not aware of. I did some further research on it on the Internet, and it sounds very entertaining. From what I know of Herrick, both from his poetry and from what I have read of his life, his fullness of character seems perfect for fiction -- and hardly needs embellishment!

I'm pleased you liked the Spencer paintings. Of course, he does not receive as much attention as his brother, but he is quite accomplished in his own quiet way. Or so I think, at least.

Fred: my experience is very similar to yours. In fact, this year I have made a conscious effort to stay completely away from news- and politics-related websites. And I never watch news on TV, particularly the cable news networks. It has been extremely refreshing, and I am doing my best to stay away.

But, like you, I also have lapses. And being on the Internet, things always sneak in.

As always, thank you for your thoughts. I'm pleased you liked the Kavanagh poem.

Stephen: I follow Fred in relation to ‘the news’, and the effect it must have on untold millions: how many, I wonder, have mental maps in which the Middle East is out of all proportion to the rest of the world? I try to keep the following quotations in mind when I feel myself lapsing:

“I worry that my own business [television] . . . helps to make this an anxious age of agitated amnesiacs . . . We Americans seem to know everything about the last twenty–four hours but very little of the last sixty centuries or the last sixty years.” Bill Moyers, quoted in Neil Postman’s ‘Amusing Ourselves to Death: Public Discourse in the Age of Show Business’. (1985)

“. . . I hope it may be allowed that if compassion has produced exertion and relief to the sufferers, it has done all that is truly important. If we feel for the wretched enough to do all we can for them, the rest is empty sympathy, only distressing to ourselves. Jane Austen, ‘Emma’.

I agree with you that Herrick is a constant source of delight. I don’t have your edition, but New York University’s ‘The Complete Poetry of Robert Herrick’ (and, yes, 1,130 poems!)

I try to pay attention to the world around me, to notice things that are a part of daily life, whether in my family, neighborhood, workplace or the whole wide world.

Literature helps me keep things in truer perspective, so I hold the daily newspaper in one hand and literature--"the news that stays news"--in the other.

Peter: thank you very much for those two quotations, which are right on point. The media (and politicians and the politically-minded) are fond of keeping us in the "crisis" mentality. For them, the world is always coming to an end.

This is why Austen's comment is so important: the fact that we don't buy into the "crisis" mentality does not mean that we cannot be mindful of, and try to do something about, the human tragedy and suffering in the world as individuals. The phony sympathy and empathy displayed in the media and by politicians is dross.

As always, it is very good to hear from you. Thank you for visiting again.

Peter's reference to the Middle East and our mental map of the world reminded me of the time when I was stationed in Texas. A favorite item found in tourist shops was a postcard of the US in which Texas occupied 3/4, or more, of the continental US and the rest of the 48 were squashed into the East and West Coasts.

I envision a world map with the Middle East occupying a huge portion of the map, pushing everything else into the Arctic and Antarctic circles.

Mr. Guirl: thank you very much for visiting again, and for your thoughts.

You're a stronger (and/or more conscientious) man than I am: I've reached the point where I've gotten rid of the newspaper (or, in this day and age, Internet news sites). I don't have enough spare mental energy for it any longer.

As I mentioned in my response to Peter's quotation of Jane Austen: this does not mean that one gives up awareness of the tragedy in the world. It is always with us -- we all know this -- but I'm not willing to keep up with the daily parade of horrors.

And I completely agree: if things leak in -- as they always do -- poetry and literature and art remind us of what is constant (and good) in the world.

Fred: I agree. I have no dogs in that fight (well, maybe I do, but I'm not saying), but it has always been the same since you and I have come to consciousness: the latest politician arrives on scene claiming that he or she will "solve" the problem in that area. Good luck!

As for Texas: yes, of course! And there is also that map of the U.S. (it first appeared on a cover of The New Yorker, I think), where a New York neighborhood dominates the foreground, there is a thin strip in the middle of a mostly vacant desert (the rest of the U.S.), followed by the Pacific.

The wise man never ceases to be angry, if once he begins. Every place is full of crime and vice … If you want the wise man to be as angry as the baseness of the crime demands, he must not only be angry, he must go mad. (On Anger, 2.9)

Equally cogent is this passage from John Cowper Powys:

In the abstract the pain of the world is bad enough, a sombre enough background for our individual experiences. But if we began to realise it in the concrete; that is to say, if we began to enter into the subjective visions of those who are suffering, it would soon become completely unendurable. ‘The Art of Forgetting the Unpleasant’, Village Press, 1974, p9

None of the above means of course that we need do nothing. However, if we do act, then we must be appropriately inspired — and knowledgeable. We might join Médecins Sans Frontières, but not if we are unqualified and temperamentally unsuited. It is all very difficult. We must attend to that which is ‘within our sphere’; and if we say, ‘the rest is not our business’, then this is — strictly — a truism.

I chuckled about Fred’s postcard of Texas and your example of the New Yorker cover. Alas, I’d forgotten about North Korea and the Congo. They are of course both appalling places – festering sores on the face of the earth, if you like – yet how lumpy and grossly misshapen would be a classroom globe that echoed the mental perceptions of the news junkies!

(I too think that Gilbert Spenser is a fine painter. Sadly, so overshadowed by his brother that I had completely forgotten about him – despite reading a book about him in the 1960s.)

Peter: don't worry: there are no limitations whatsoever! And what you have shared adds further depth to the discussion. I particularly like the Powys quote: I really need to read more of him. I'm not much for fiction, but I would like to explore his essays and other non-fiction.

I appreciate the follow-up thoughts. Thanks again.

I loved "Leave Them Alone." And written in 1955! I wonder what he could have been thinking of.

Goethe Girl: it's very nice to hear from you again.

I'm pleased you liked "Leave Them Alone." I'm very fond of it as well. As to what he was thinking of: Irish (more particularly, Dublin) literary-religious politics.