No Escape, Part Thirteen: "Switch Love, Move House -- You Will Soon Be Back Where You Started"

I am intimately familiar with both the dream of Escape and its companion, the Siren song of the Ideal Place.  A long-time reader of this blog recently commented that he had spent his holiday in the Lincolnshire Wolds. Being unfamiliar with the area, I did some Internet research.  Upon seeing how lovely the area is, I soon began dreaming of spending my remaining years in a secluded vale amid the Wolds, "and a small cabin build there, of clay and wattles made."  With occasional treks eastward to the North Sea for a walk along the shingle.  And so it goes . . . 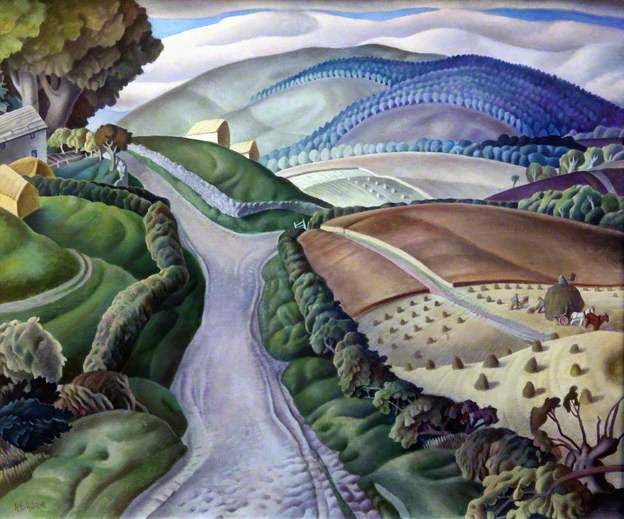 The theme of this "No Escape" series of posts is:  "Wherever you go, there you are."  As I have noted before, this notion is not a contemporary pop psychology platitude.

"Ambition, avarice, irresolution, fear, and lust do not leave us when we change our country . . . Someone said to Socrates that a certain man had grown no better by his travels.  'I should think not,' he said, 'he took himself along with him.'"

"The general remedy of those, who are uneasy without knowing the cause, is change of place; they are willing to imagine that their pain is the consequence of some local inconvenience, and endeavour to fly from it, as children from their shadows; always hoping for more satisfactory delight from every new scene, and always returning home with disappointments and complaints. . . . [H]e, who has so little knowledge of human nature, as to seek happiness by changing any thing, but his own dispositions, will waste his life in fruitless efforts, and multiply the griefs which he purposes to remove." 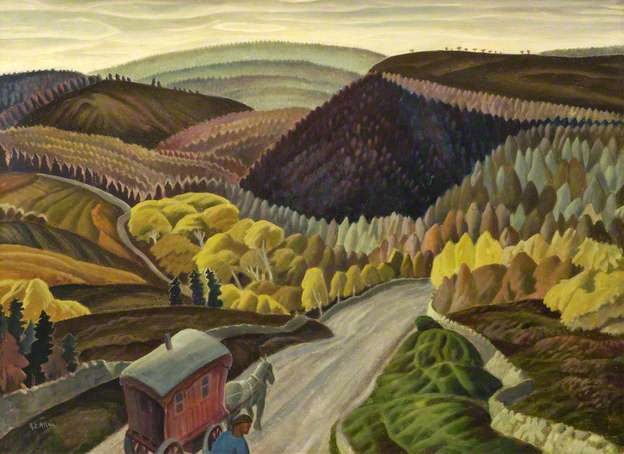 Never would there be lives enough for all
The comely places --
Glimpsed from a car, a train, or loitered past --
That lift their faces
To be admired, murmuring 'Live with me.'

House with a well,
Or a ghost; by a stream; on a hill; in a hollow: breathing
Woodsmoke appeal,
Fresh paint, or simply a prayer to be kept warm,
Each casts her spell.

Life, claims each, will look different from my windows,
Your furniture be
Transformed in these rooms, your chaos sorted out here.
Ask for the key.
Walk in, and take me.  Then you shall live again.

. . . Nor lives enough
For all the fair ones, dark ones, chestnut-haired ones
Promising love --
I'll be your roof, your hearth, your paradise orchard
And treasure-trove.
With puritan scents -- rosemary, thyme, verbena,
With midnight musk,
Or the plaintive, memoried sweetness tobacco-plants
Exhale at dusk,
They lure the footloose traveller to dream of
One fixed demesne,
The stay-at-home to look for his true self elsewhere.
I will remain
Your real, your ideal property.  Possess me.
Be born again.

If only there could be lives enough, you're wishing? . . .
For one or two
Of all the possible loves a dozen lifetimes
Would hardly do:
Oak learns to be oak through a rooted discipline.

Such desirableness
Of place or person is chiefly a glamour cast by
Your unsuccess
In growing your self.  Rebirth needs more than a change of
Flesh or address.

Switch love, move house -- you will soon be back where you started,
On the same ground,
With a replica of the old romantic phantom
That will confound
Your need for roots with a craving to be unrooted. 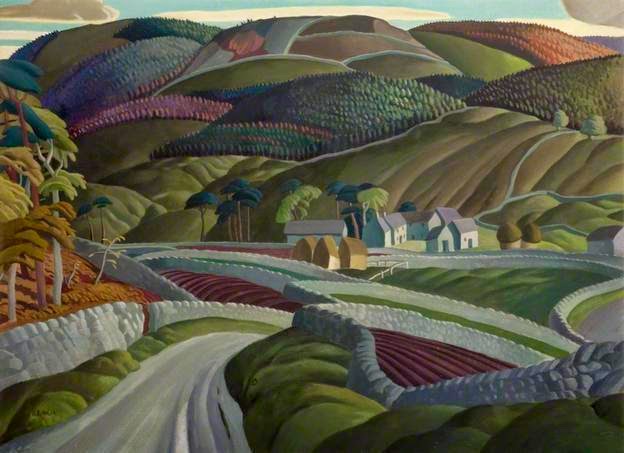 Harry Epworth Allen, "A Derbyshire Farmstead"
Posted by Stephen Pentz at 1:00 AM

Each entry from First Know When Lost is a welcome event. Thank-you.

"Oak learns to be oak through a
rooted discipline."


If this poem has a core, I nominate the above line. The rest of the poem tells me something, but this line shows me and showing is superior to telling.

I love your blog and enjoy looking at the paintings and artwork you discover for us. Thank you.

Pack new suitcases with new clothes, by a ticket to a place where you think you will be set free--it will not do: we never can empty and repack the baggage of the heart, molded, worn ,cumbersome, and, finally, haunting. We'd lug the thing behind us, a groaning chain, mournful in its dragging, even in the green vales of paradise.

Cavafy knew as much:


You said: “I’ll go to another country, go to another shore,
find another city better than this one.
Whatever I try to do is fated to turn out wrong
and my heart lies buried as though it were something dead.
How long can I let my mind moulder in this place?
Wherever I turn, wherever I happen to look,
I see the black ruins of my life, here,
where I’ve spent so many years, wasted them, destroyed them totally.”

You won’t find a new country, won’t find another shore.
This city will always pursue you. You will walk
the same streets, grow old in the same neighborhoods,
will turn gray in these same houses.
You will always end up in this city. Don’t hope for things elsewhere:
there is no ship for you, there is no road.
As you’ve wasted your life here, in this small corner,
you’ve destroyed it everywhere else in the world.

Brian: thank you very much for the kind words. I'm pleased and flattered that you enjoy your visits here, and I appreciate your taking the time to comment.

Fred: I understand what you mean by "telling" versus "showing." I agree that the line you quote is the core of the poem (together with its echo in the final line). But perhaps the emphasis on "telling" in the poem is balanced a bit by the formal poetic structure within each of the three sections -- a structure that reminds me of something that Hardy (who Day Lewis greatly admired) might contrive. And, come to think of it, there is a fair amount of "telling" in Hardy's poetry, don't you think? ("Purblind Doomsters" and all that.)

As always, it is a pleasure to hear from you. Thank you for visiting again.

Lyn: I greatly appreciate your kind words. Thank you very much. I'm happy that you found your way here, and I hope that you will return. Thanks again.

Anonymous: well said. Thank you very much for those thoughts. As for Cavafy's poem, you and I are on the same wavelength: I posted "The City" as the third entry in this "No Escape" series -- way back on March 25, 2010, when I was first embarking on this venture. It is a lovely poem, isn't it? Thank you for sharing it: a good time for a revisit.

Following Lyn's comment, I read your blog not only for the poems but for the introduction to some wonderful paintings. I had never seen the work of Harry Epworth Allen, which is extraordinarily beautiful. Thank you. I shall also now look for a copy of Montaigne!

Mr Pentz, I had to respond. That mention of the Lincolnshire Wolds was too much to ignore. Perhaps I should have been stronger and resisted, but I'm human and have my weaknesses too. However that is by- the-by I really wanted to comment on C Day Lewis poem. He's not a writer I'm terribly familiar with. As Fred pointed out" Oak learns to be oak through a rooted discipline." is a wonderful line, and for me this one also;
"Rebirth needs more than a change of
Flesh or address.
Thank you for the poem, it's always such a delight to make these new discoveries.
I seem to recall that you mentioned a possible trip to East Anglia and perhaps the Wolds. I do hope you get there. You may not be able to build yourself a small cabin in a secluded vale, but I have an inkling you would enjoy journeying through those open and wooded valleys and the bird-loud saltmarshes and deserted beaches beside the North sea very much indeed.

Oh Stephen, this is indeed a rich and lovely blog
So much herein to sense, to see, to hear
To question and to muse upon
And there is yet another side to tell
Of those of us who are not oak
whose roots are in the air
and who must answer the call to leave
a much beloved place
when it comes
so we may grow as 'not oak'
Thank you
midi

Deborah: thank you very much for the kind words. I'm always pleased when the paintings strike a chord with visitors. I discovered Harry Epworth Allen just a few years ago, and, like you, I was immediately taken with his work. As far as Montaigne goes: I visit him too rarely; but, when I do, I am always amazed at his wisdom: 500 years ago, he covered all of the ground that we moderns have the illusion that we are covering for the first time.

Mr Ashton: I hope you don't mind me borrowing your holiday! But I was beguiled by my introduction to the Wolds via the Internet. I hope that I can find the time to make the trip to England this autumn. And I am still hoping to try the East Anglia and northward excursion: I have fond memories of a long ago trip to Yorkshire, and, beyond that, to Hadrian's Wall.

I have only started getting serious about catching up with C. Day Lewis's poetry in the past few years, and I have been pleasantly surprised.

midi: thank you for that lovely comment. There is indeed another side to this. Leaving a beloved place to discover another beloved place is entirely appropriate -- I can think of many beloved places in my life where I could be, as you say, "a not oak."

I didn't mean to imply that telling was bad--sorry about that. And yes, Hardy does engage in his share of telling.

Fred: the fault is mine: I was jumping to conclusions, and I apologize for that. We agree (I think) that telling and showing both have their place in poetry (sometimes within the same poem). And, as two admirers of Hardy, I'll presume to say that we enjoy him both when he is telling and when he is showing.

Thank you very much for the follow-up thought.

Mr Pentz, as one who moved from the northern hemisphere to the south, I understand the "no escape" theme. Wherever one lands, one has longing for that which is left. Have you come across the W.S. Merwin poem "After Some Years", which speaks of the sense of exile.

Thank you so much for your blog. Its poems, its artworks and, above all, your commentary, brighten up so many of my days.

Yes, showing and telling both have their roles to play in poetry.

And oh yes, Hardy definitely is enjoyable regardless of the mode.

Mr. Rowbottom: I greatly appreciate your kind words: thank you very much. The pleasure is all mine. I am grateful that you found your way here.

Thank you for the poem by W. S. Merwin. Although I have read some of his poetry and translations, this one is new to me: it is lovely. And right on point.

I shouldn't be too hard on escape: I have lived in foreign lands on two occasions (once for a year; once for two years), and I thoroughly enjoyed both "escapes" -- and learned a great deal in the process.

Fred: thanks again. And, again, I apologize for any misunderstanding on my part. It's always good to hear from you.

No problem. I should have made my point more clearly.