"You Linger Your Little Hour And Are Gone, And Still The Woods Sweep Leafily On"

This year, as autumn has turned, two phrases have been recurring to me. First:  "Slow, slow!"  (From Robert Frost's "October.")  And second:  "Earth never grieves!"  (From Thomas Hardy's "Autumn in King's Hintock Park.") By the way, the exclamation marks (which are appropriate, I think, given the sentiments expressed) appear in the originals.

The phrases came to me again this past week when I finally got around to visiting a grove of trees that is one of my favorite autumn haunts.  Alas, the trees were half empty.  I was reminded of Ishikawa Jozan's lines about paying a late visit to the spring cherry blossoms:  "When blossoms were at their finest I neglected to call./The blossoms did not betray me.  I betrayed the blossoms."  (Ishikawa Jozan, "Fallen Blossoms on the Eastern Hills.")

But the trees remain beautiful.  The upper branches, exposed to the wind, are nearly bare; the lower boughs less so.  In a breeze, one can still hear, if not a roar, at least a whoosh and a rustle.  And the gold and red against a blue sky?  Well, that's autumn, isn't it?

As I stood beneath the trees, I had another thought:  All of this goes on quite well with or without us.  No waiting around.  Indifference? Impassivity?  Those are human concepts.

How countlessly they congregate
O'er our tumultuous snow,
Which flows in shapes as tall as trees
When wintry winds do blow! --

As if with keenness for our fate,
Our faltering few steps on
To white rest, and a place of rest
Invisible at dawn, --

And yet with neither love nor hate,
Those stars like some snow-white
Minerva's snow-white marble eyes
Without the gift of sight.

When A Boy's Will was first published, Frost included, in the table of contents, a brief gloss for each poem.  (The glosses were removed in subsequent reprintings.)  His gloss for "Stars" was:  "There is no oversight of human affairs." 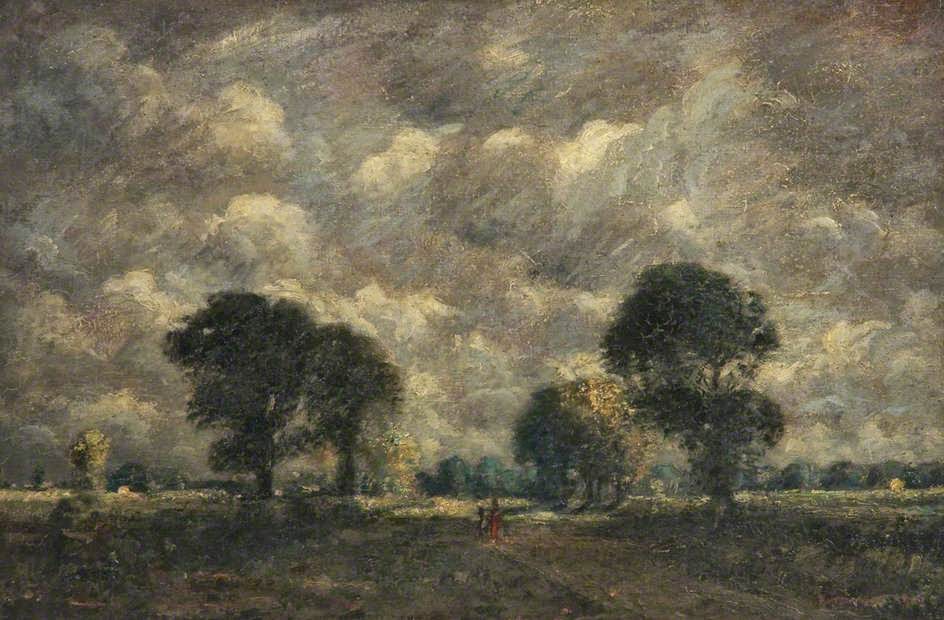 I do not intend to get bogged down in the critical discussion of whether Frost was the bucolic nature poet and the front-porch Yankee philosopher of caricature (a self-created caricature to a great extent) or whether he was, lo and behold, "dark," "bleak," and "harrowing."  Like any great poet, he was capacious.  I will say this:  there is a thread of loneliness -- both personal and cosmic (consider, for a start, "Desert Places") -- that runs through everything he wrote.

As vain to raise a voice as a sigh
In the tumult of free leaves on high.
What are you in the shadow of trees
Engaged up there with the light and breeze?

Less than the coral-root you know
That is content with the daylight low,
And has no leaves at all of its own;
Whose spotted flowers hang meanly down.

You grasp the bark by a rugged pleat,
And look up small from the forest's feet.
The only leaf it drops goes wide,
Your name not written on either side.

You linger your little hour and are gone,
And still the woods sweep leafily on,
Not even missing the coral-root flower
You took as a trophy of the hour.

A coral-root is a lovely little thing, after all. 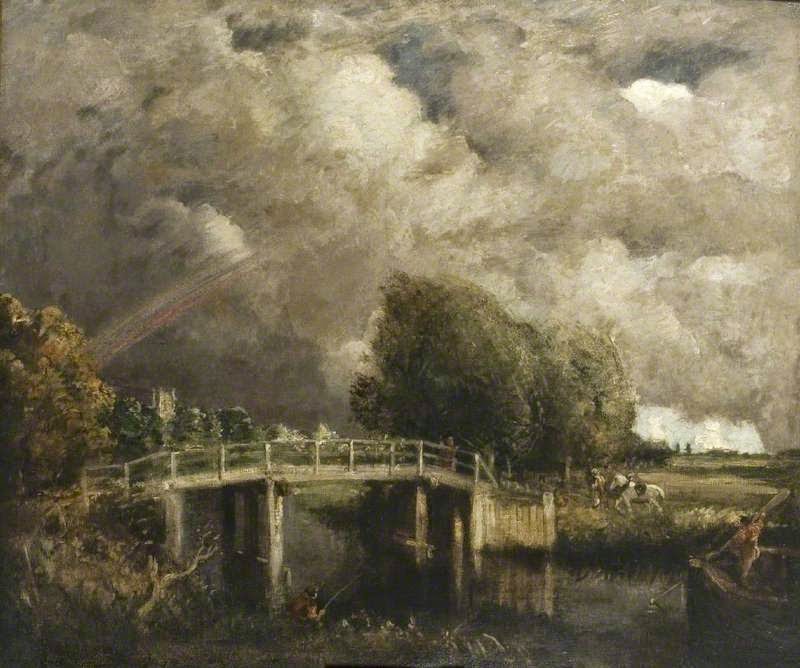 Is Nature beneficent?  Or is it threatening?  Both, of course.  But, either way, it is keeping its thoughts to itself.  Best to get used to the silence.  The beauty is not lessened.

When the spent sun throws up its rays on cloud
And goes down burning into the gulf below,
No voice in nature is heard to cry aloud
At what has happened.  Birds, at least, must know
It is the change to darkness in the sky.
Murmuring something quiet in her breast,
One bird begins to close a faded eye;
Or overtaken too far from his nest,
Hurrying low above the grove, some waif
Swoops just in time to his remembered tree.
At most he thinks or twitters softly, 'Safe!
Now let the night be dark for all of me.
Let the night be too dark for me to see
Into the future.  Let what will be, be.'

A side-note:  please bear with me as I return to the continual conversation between Frost and Edward Thomas that I mentioned in my previous post. Here is Thomas in the final stanza of "Out in the Dark" (his final poem but one):

And Frost responds:  "I have been one acquainted with the night." 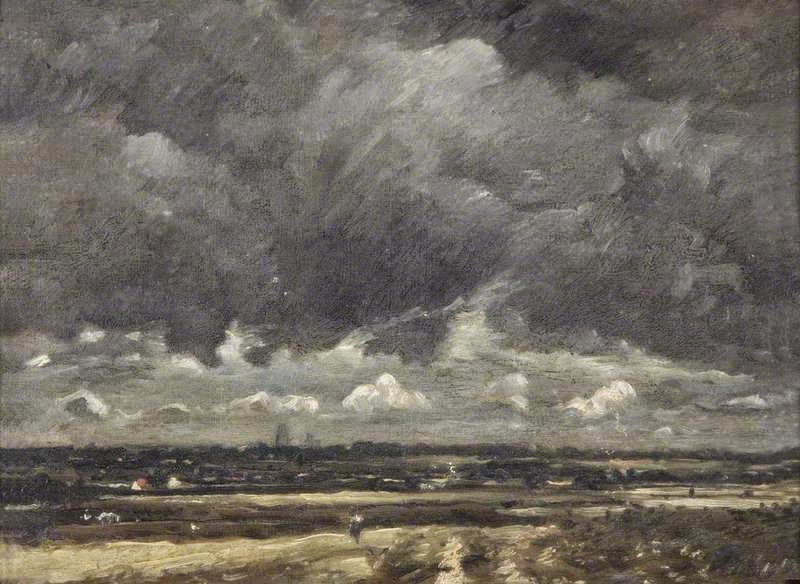 David Muirhead, "A Lowland Landscape"
Posted by Stephen Pentz at 1:50 AM

Marvelous. I have not yet encountered those poems by Frost during my own visits to his works.

I agree. Even in his most bucolic moments, there is a darker current underneath. Sometimes loneliness, sometimes something like despair.

Fred: Thank you very much. I'm pleased you liked the poems. Each time I visit his poems, I make it a point to visit out-of-the-way poems, in addition to the old chestnuts. I have to remind myself not to neglect poems such as these.

I agree that "something like despair" accurately describes the mood of some of his poems. Which I confess I prefer to his jocular, Yankee philosopher persona, which to me strikes a false note.

It's always good to hear from you. Thank you for stopping by.

Auden catches the truth almost as succinctly as you do (see his poem below). Your words bore to the marrow of the human plight: we live and die, suffer and revel, under indifferent skies.

When we are gone spring will come around again, the dogwoods blooming, not mourning us or anyone, and autumn, ever faithful in arriving, will find the afternoon wind stripping the leaves from the trees and layering them atop the ground in which we lie.

You write, eloquently I think:

As I stood beneath the trees, I had another thought: All of this goes on quite well with or without us. No waiting around. Indifference? Impassivity? Those are human concepts.

About suffering they were never wrong,
The Old Masters; how well, they understood
Its human position; how it takes place
While someone else is eating or opening a window or just walking dully along;
How, when the aged are reverently, passionately waiting
For the miraculous birth, there always must be
Children who did not specially want it to happen, skating
On a pond at the edge of the wood:
They never forgot
That even the dreadful martyrdom must run its course
Anyhow in a corner, some untidy spot
Where the dogs go on with their doggy life and the torturer's horse
Scratches its innocent behind on a tree.
In Breughel's Icarus, for instance: how everything turns away
Quite leisurely from the disaster; the ploughman may
Have heard the splash, the forsaken cry,
But for him it was not an important failure; the sun shone
As it had to on the white legs disappearing into the green
Water; and the expensive delicate ship that must have seen
Something amazing, a boy falling out of the sky,
had somewhere to get to and sailed calmly on.

This passage (see below) from "All the Pretty Horses" by Cormac McCarthy illustrates the disturbing (sometimes terrifying) thought that we are aliens in our world, alone and abandoned, under a heaven stitched shut.

Would it be incorrect to say that McCarthy's words are, if you allow latitude, a prose poem?

“He stood hat in hand over the unmarked earth. This woman who had worked for his family fifty years. She had cared for his mother as a baby and she had worked for his family long before his mother was born and she had known and cared for the wild Grady boys who were his mother's uncles and who had all died so long ago and he stood holding his hat and he called her his abuela and he said goodbye to her in Spanish and then turned and put on his hat and turned his wet face to the wind and for a moment he held out his hands as if to steady himself or as if to bless the ground there or perhaps as if to slow the world that was rushing away and seemed to care nothing for the old or the young or rich or poor or dark or pale or he or she. Nothing for their struggles, nothing for their names. Nothing for the living or the dead

Oh for the days when a poet could put the word "twitter" into a poem without discomfort.
I too am happy to have made the acquaintance of "Acceptance". Interesting that one of my favorite Frost poems, "Come In", is much taken up with birds singing in the woods as dark approaches. That is a poem that flirts with very dark matter.
Susan
Susan

Mr. Floyd: Thank you very much for the kind words -- although Auden is infinitely more "succinct" and "eloquent" than I am, needless to say! And thank you as well for sharing "Musee des Beaux Arts," which I hadn't thought of in this context. But I agree that it goes quite well here.

Anonymous: Thank you for sharing the lovely passage from Cormac McCarthy, which is new to me. It fits perfectly here, and is very moving. Thanks again.

Susan: Hah! You and I think alike: I had the same thought about "twitters" when I typed out the text of "Acceptance"! Very unfortunate, isn't it? It feels like it has been stolen. But, then, I'm not a Twitter user. I agree with your: "Oh for the days . . ."

Thank you very much for bringing in "Come In." It is one of my favorite Frost poems. You're right: it goes very well with the other poems, both in terms of darkness ("Now if it was dusk outside,/Inside it was dark"; "Far in the pillared dark"; "a call to come in/To the dark and lament") and in terms of Nature's distance ("I meant not even if asked;/And I hadn't been." Wonderful.

As ever, it is very nice to hear from you, and I appreciate your stopping by.

We all know that even the great Homer nodded sometimes and so does McCarthy in the passage quoted in a comment to your blog.

A cliché-ridden pedant would say that McCarthy commits "a grammatical howler." To notice the grammatical error might be construed as nitpicking, but one need not be censorious and acerbic in pointing it out.

One wonders how McCarthy and his editor missed the error. Some might say that long sentences up the chances of grammatical mistakes.

The error diminishes the passage's beauty in no way at all.

". . . and seemed to care nothing for the old or the young or rich or poor or dark or pale or he or she."

It should be "him or her" at the end. The pronouns are objects of the preposition "for."

I am sure McCarthy would have never written " . . .and seemed to care nothing for "he or she." My guess is that the serial objects of "for" led to the mistake.

For the record: McCarthy is my favorite contemporary novelist, and I would read him with delight and wonder if he had made manifold grammatical errors. He doesn't though.

Anonymous: Thank you for your thoughts. I defer to you on McCarthy's grammatical quiddities. I confess that I have never read anything by him, so I am not one to judge. I do remember reading somewhere that he has a touch of Faulkner to his writing, which occurred to me when I read the passage you quoted. Such a style perhaps requires allowances.