"Be Frugal In The Gift Of Love"

One of the nice things about poetry is that one thing leads to another. Elizabeth Jennings's poem "Delay" ends with this lovely line:  "And love arrived may find us somewhere else."  I had been thinking about the line over the past couple of days.  And then the following poem by Richard Church (1893-1972) arrived out of the past.

Be Frugal
Be frugal in the gift of love,
Lest you should kindle in return
Love like your own, that may survive
Long after yours has ceased to burn.
For in life's later years you may
Meet with the ghost of what you woke
And shattered at a second stroke.
God help you on that fatal day.
Richard Church, The Solitary Man (1941).
In mid-20th century England, Richard Church was what used to be called "a man of letters."  He and his work are now mostly forgotten, I fear.  I have spent some time with his poetry over the years, and there are several quiet, fine poems like "Be Frugal" to be found there.  I am not suggesting that his work should displace that of the "Major Poets."  However, I now find that it is individual poems, not poets, that are most important to me.  I first read "Be Frugal" perhaps 20 (or is it 30?) years ago.  Now it unaccountably returns and delights me once again. 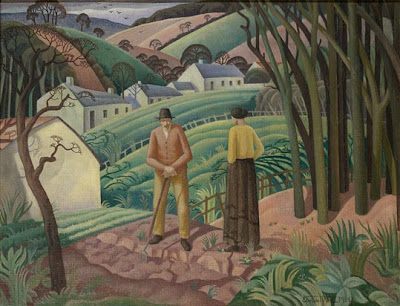 Thanks for posting this poem. I first ran into it the same number of years ago and wish I had better learned the lesson. Even so, a true delight...time to rediscover his quiet, fine poems.

There's so much truth in what he says.
Though frugality is hard to practice when your in love...........
j

'I first read "Be Frugal" perhaps 20 (or is it 30?) years ago. Now it unaccountably returns and delights me once again': what a pleasing echo of the poem itself

Dwight: thank you very much for visiting and commenting again. As for wishing that you had "better learned the lesson": I suppose that that sort of lesson has to be lived (from either or both sides) first, and then, like Church, one is able to write the poem (ruefully) afterwards. Thanks again.

Julie: I agree -- easier said than done! If Church based the poem on his own experience, it seems that he wasn't able to follow his own retrospective advice. (Please see my thoughts to Dwight above.)

As always, thank you for your thoughts, and for taking the time to stop by.

zmkc: I hadn't thought of it that way. Thank you for that slant on things: better to have a poem return as a delight than to have Church's "ghost" return, eh? (Of course, I can't say that I am clever enough to have intended the echo!)

It's always good to hear from you, zmkc. Thanks again.

My English teacher Mrs Barratt wrote the first verse in my leaving book when I left school in 1982. I have never forgotten it and only today, after looking it up, have I discovered who wrote it and that it was part of a longer poem.

Unknown: That's a lovely anecdote. I can understand why the lines have stayed with you all these years. It's an interesting poem for your teacher to have chosen: both it and Richard Church are not very well known. I first came across the poem many years ago in Philip Larkin's anthology The Oxford Book of Twentieth-Century English Verse, and it stayed with me as well. I'm pleased that you have now seen the entire poem, and know who wrote it.

Please accept my apologies for the delay in posting, and responding to, your comment. Thank you very much for taking the time to comment, and for visiting.