Variations On A Theme

One of the joys of poetry is encountering a new poem that calls up a poem you had nearly forgotten.  The unanticipated connection multiples your pleasure:  not only have you gained the new poem, but you have also gained the implications that arise out of the echoes of the old poem.

I recently found this poem by Hugo Williams:

The cricket ball lingered an eternity
in the patch of blue sky
before returning eventually to earth.

I was standing with outstretched arms
when the full force of the future
hit me in the mouth.

"The Accident" brought to mind one of the small gems discovered by Philip Larkin and included by him in The Oxford Book of Twentieth-Century English Verse (1973).  I know little about Michael Ivens (1924-2001), the writer of the following poem.  However, I did come across a harrumphing obituary in The Guardian, which is harrumphingly titled:  "Michael Ivens: Champion of the Libertarian Right and Business Freedom."  The Guardian is reliably hilarious in its harrumphing, and the obituary, contrary to The Guardian's hopes, prompted me to think to myself:  "I like the cut of this man's jib.  He seems to have been remarkably thoughtful, clear-headed, and free of cant.  No wonder The Guardian seems to have taken a dislike to him."

But, back to poetry:

soaring out of sight
out of my prosaic life

Unstintingly
I gave him
my admiration 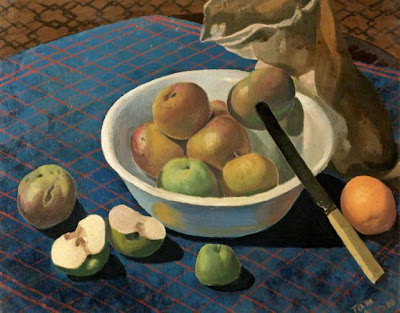 Hugo Williams used to write amusing Diary columns that I always looked forward to in the LRB, but it is Michael Ivens's poem that has won my heart on this occasion. And, as usual, you have miraculously found a beautiful accompanying illustration.

As always, thank you for visiting, and for the kind words, zmkc. I am tracking down Michael Ivens's books, but I suspect that Larkin (as is usually the case) found THE pearl. Thanks again.

First Day at School may well be Ivens' best. But I have a lot of respect for:

He puts his life
into a sack.

He puts the sack
onto his back
and goes off seeking.

The sack is leaking.

Pryderi: thank you very much for visiting, and for the thoughts. And thank you as well for "Diminishing Returns": I hadn't come across it before. Very nice! I've been meaning to track down one or two of Ivens's collections, and you have motivated me to do so.

I've come a bit late to this post. I worked for Michael Ivens for a few weeks in the early nineties at Aims of Industry. My political leanings were firmly to the left of his, but I liked his poetry and he was the only boss with whom I ever shared a half bottle Burgundy over our sandwiches. He gave me his poetry books with the most charming inscriptions. A very nice funny and intelligent man.

Mr. Henning: thank you very much for visiting, and for your anecdotes about Michael Ivens -- I greatly appreciate your sharing them.

Your description of him pretty well coincides with the mental image that I had conjured of him from reading his poetry and from doing a bit of research about him on the Internet: I'm pleased to discover that my vision of him seems to have been in line with how he really was. (I confess that my political leanings tend to be in agreement with his as well!) Your memories of him are delightful, and it is nice to hear him described as "a very nice, funny and intelligent man."

Again, thank you very much for taking the time to share your memories. You've now prompted me to return to his poetry as well!

This is Michael Ivens first child- Yvette.
I was bought up with his poetry and remember reading the galleys of books with him on the hall floor.

His books 'Another sky' - (signed for me " For Miss Yvette - who deserves the best skies!')and 'No woman is an island', are my favourites.
The Last Walz- " (For Yvette who does the last bop") with illustrations by Abu. A poignant poem at the last cafe at the edge of death and life.

Yvette: It is an honor and a delight to hear from you! As I noted above in response to Mr. Henning's comment, I had the sense that your father was a wonderful man, which is now further confirmed by the lovely memories you have shared. I greatly appreciate your sharing them.

I hope to post more poems by him in the future.

Thank you very much for taking the time to share your memories.