Life As A Work Of Art, Part Two: "The Cast Is Large. There Isn't Any Plot."

The poetry of Hilaire Belloc (1870-1953) can be too acerbic for some, but I find it entertaining.  (For a more lyrical, less cynical side of Belloc, I recommend his prose works Hills and the Sea, The Old Road, and The Path to Rome.)  I was introduced to Belloc via the following sonnet, which employs Shakespeare's "all the world's a stage" as a starting point for another view of Life as a theatrical entertainment.

The world's a stage.  The trifling entrance fee
Is paid (by proxy) to the registrar.
The Orchestra is very loud and free
But plays no music in particular.
They do not print a programme, that I know.
The cast is large.  There isn't any plot.
The acting of the piece is far below
The very worst of modernistic rot.

The only part about it I enjoy
Is what was called in English the Foyay.
There will I stand apart awhile and toy
With thought, and set my cigarette alight;
And then -- without returning to the play --
On with my coat and out into the night. 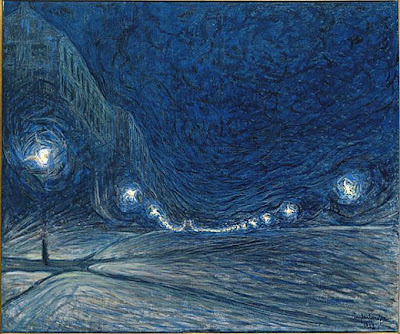 Labels: Hilaire Belloc, Life As A Work Of Art