"I Have Been A Hazel-Tree, And They Hung The Pilot Star And The Crooked Plough Among My Leaves"

There was a time (during my college years and immediately thereafter) when I was in love with the poetry of Yeats.  I'm sure that many others have had the same experience.  A few lines can capture the essence of this youthful infatuation.  "When you are old and grey and full of sleep . . ."  "A pity beyond all telling/Is hid in the heart of love . . ."  "The trees are in their autumn beauty,/The woodland paths are dry . . ."  "And the white breast of the dim sea/And all dishevelled wandering stars."  It is easy to see why I was beguiled.

But at some point it all seemed too high-pitched.  Added to that was Yeats's penchant for self-dramatization and for oracular pronouncements based upon questionable cosmologies.  And then I discovered, in turn, Thomas Hardy, Edward Thomas, and Philip Larkin.  I immediately felt:  "This is more like real life."

Don't get me wrong:  in terms of sheer volume of beautiful and memorable poems, Yeats has few (or, perhaps, no) equals.  His poetry still delights me when I read it.  But, as the saying goes, the thrill is gone.  I am perfectly willing to concede that my falling out of love is due to a spiritual, emotional, and/or aesthetic failure on my part.  Or perhaps I just grew old. (After all, The White Album no longer means to me what it once did.)

All of this leads up to a lovely poem by Yeats -- a poem that goes well with Ezra Pound's "I stood still and was a tree amid the wood." 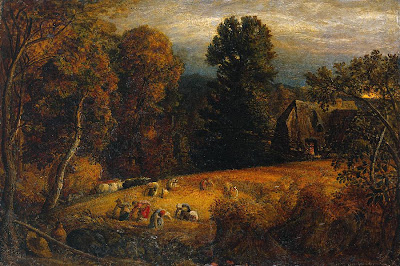 I have drunk ale from the Country of the Young
And weep because I know all things now:
I have been a hazel-tree, and they hung
The Pilot Star and the Crooked Plough
Among my leaves in times out of mind:
I became a rush that horses tread:
I became a man, a hater of the wind,
Knowing one, out of all things, alone, that his head
May not lie on the breast nor his lips on the hair
Of the woman that he loves, until he dies.
O beast of the wilderness, bird of the air,
Must I endure your amorous cries?

Nobody does this sort of thing better than Yeats.  I confess that I can still feel the pull. 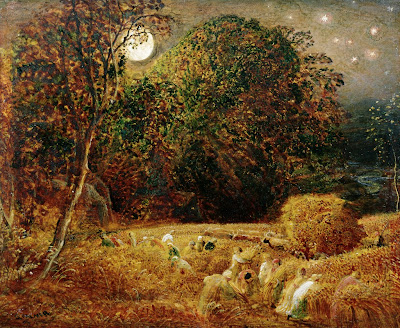 I was completely in love with Yeats's poetry as a teen, then moved away from it somewhat. I relate to some of your comments. I have found, in a way, that he is a very deeply ingrained part of my life now and that it almost doesn't matter any more if I read him actively or not - if you know what I mean. However, I find the sort of "high-pitched" preciousness more of a problem in his earlier works. Later works such as the Byzantium poems, The Circus Animals' Desertion, etc, have an incredible gravitas, power and beauty. Also, the way that he could write about incredibly personal subjects and make them represent something universal is something I find quite remarkable.

Ms Aykroyd: thank you very much for visiting again, and for your thoughts on Yeats.

I have been reading his poetry after a long absence, and I know what you mean about it being "ingrained" -- everything feels very familiar even though it may have been years since I read a particular poem.

As for early versus late Yeats, I have found -- to my surprise -- that, in revisiting his poetry, I prefer the early Celtic twilight Yeats to the later rag-and-bone-shop Yeats. In both cases, the persistent self-dramatization still gets on my nerves, but for some reason I have more tolerance for the former than for the latter. Which is not to say that I don't enjoy the later poems -- I do.

Again, thank you for stopping by. I always appreciate hearing from you.