Life As A Work Of Art, Part Six: "Only The Disconsolate Hero Survives"

As one ages, commonplaces become eternal verities.  Truisms are recognized as being true.

For instance:  the longer one lives, the more one gets the uneasy feeling that Reality consists of bad actors appearing in an ill-conceived sequel to a movie that wasn't very good in the first place.  Or, alternatively, that it consists of unconvincing characters in one of those novels that are awarded prizes and are described as "lyrical and moving" in reviews and blurbs.

Commonplaces, yes.  But here is the proverbial rub (of which we are all aware):  how do we avoid becoming one of those bad actors or unconvincing fictional characters?  Alas, dear reader, we don't. 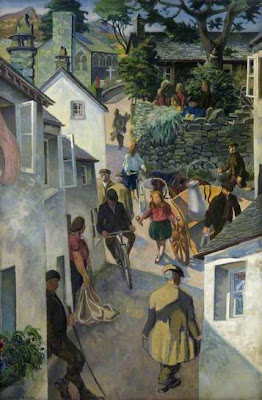 Novels I Have Never Written

From novels I have never written
The ghosts have long departed,
Leaving tenantless the Sussex country houses
And the palazzo steps green with moss.
Only the foundations remain
On which were to have risen
The towers and cloisters of the fatal school.
In the unfinished rooms
The conversations have shivered into silence.
The moving incidents,
The revealing situations,
The moments of profound psychological insight --
All are lost, unwanted,
Like garden furniture rusting in a summer-house.
All the ghosts have departed, unaccounted for,
Some perhaps for South America,
Others to get what employment they can
As car-park attendants and waiters in seaside hotels,
Or they have simply died.

Only the disconsolate hero survives,
Sitting on an upturned packing-case in an empty house,
With the electricity and the telephone cut off,
Nothing to eat, no money, and nowhere to go.
Too round a character to disappear quietly,
Too big a man to be pensioned off or eased into a sinecure.
Presently, perhaps, he will reappear in Oxford
As one of those dusty, forgotten dons whom I have heard
Talking to themselves in the High,
Or a faded roue living on the Cote d'Azur
On the savings of a discarded opera-singer --
Someone who can sustain the pretence
Of having been influential in former days,
The intimate of writers, friend of diplomats . . . 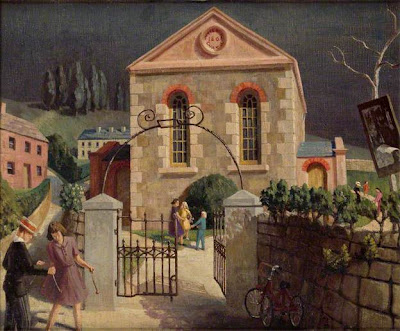 The Life imitates Art/Art imitates Life motif is, of course, an ancient one. And, as I have noted before, each generation tends to have the erroneous view that its own age is uniquely wise and/or uniquely cursed in comparison with prior ages.  Perspective is required.

That being said, I do think that a bad actor in a small hamlet in medieval Swabia had less capacity for creating mischief than a bad actor with a website (or a blog?) in today's "global village."  Moreover, today's bad actors and unconvincing characters number in the millions, and are always clamoring for attention.  What's worse, many of them become heads of state, politicians, media mouthpieces, "journalists," social scientists, and celebrities. 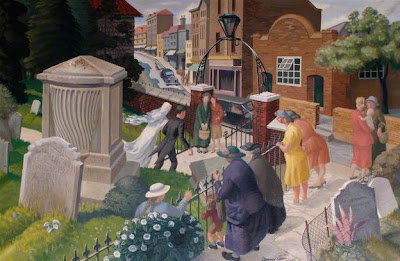 Osmund Caine, "Wedding at Twickenham Parish Church" (1948)
Posted by Stephen Pentz at 12:40 AM

Yes, Mr Pentz one of the downsides of the "global village" is that it does give an open arena to the very many bad actors to self-indulgently give vent to their empty-headed opinions. Television and radio is brimful of them. I find both mediums increasingly difficult to watch or listen to.
As an aside the painting you posted of The wedding at Twickenham parish church is about a two minute walk from a library I work in many years ago. I often used to sit in the churchyard at lunchtimes, I remember it as being a peaceful haven in a fairly busy town, and the artist himself lived for many years about half a mile away from where I currently work. He painted many paintings of the local area.

Mr Ashton: that's a wonderful coincidence about your personal associations with Caine's Twickenham Church painting. I have since found his obituary on the Internet and I see that he taught at a school in Twickenham for many years. The article also mentions that he put his name and his wife's name on one of the tombstones in the "Wedding at Twickenham Church" painting -- I cannot see it in the Internet image, unfortunately. This doesn't surprise me, since the paintings that I have seen by him do often have a humorous side to them.

Thank you very much for sharing that information. It's always good to hear from you.