Estrangement from a loved one (or from a once-loved one) is the theme of a large number of Thomas Hardy's poems.  Hardy's most significant estrangement was from Emma, his first wife.  Upon her death, the estrangement was converted into the sorrow and regret of Hardy's "Poems of 1912-13," his finest sustained poetic achievement.  But there are all sorts of separations and distances in his poetry.

"Neutral Tones," which appeared in my previous post, is an instance of the romantic estrangement of a young man.  Despite the direness of the scene (e.g., "a few leaves lay on the starving sod;/-- They had fallen from an ash, and were gray") one gets the sense that there is a bit of youthful self-dramatization at work.  In contrast, Hardy's later poems of estrangement tend to be less romanticized.

Rain on the windows, creaking doors,
With blasts that besom the green,
And I am here, and you are there,
And a hundred miles between!

But that thwart thing betwixt us twain,
Which nothing cleaves or clears,
Is more than distance, Dear, or rain,
And longer than the years!

Line 9 is remarkable: its eight clotted syllables embody "the division" and the distance between the couple.  "But that thwart thing betwixt us twain." (Try repeating that quickly five times.)  "Thwart" in the sense of "adverse, unfavourable, untoward, unpropitious; especially applied (with mixture of literal sense) to a wind or current:  cross."  OED.  Note the contrast between the first four syllables ("but that thwart thing") and the last four syllables ("betwixt us twain").  In working our way through the line, we enact the difficulty at hand. 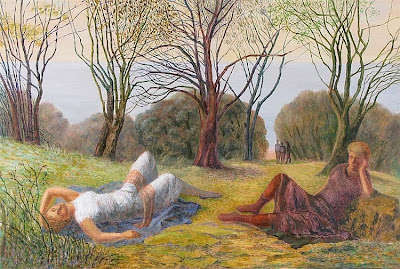 The theme of distance -- both physical and emotional -- in "The Division" is reminiscent of the following untitled poem by Mary Coleridge.

We never said farewell, nor even looked
Our last upon each other, for no sign
Was made when we the linked chain unhooked
And broke the level line.

And here we dwell together, side by side,
Our places fixed for life upon the chart.
Two islands that the roaring seas divide
Are not more far apart.

The image of the final two lines is lovely -- searing, but lovely. 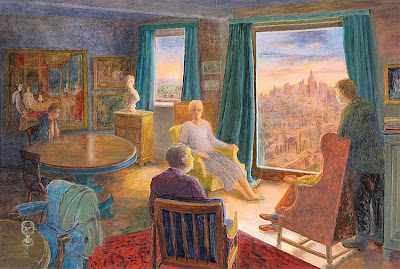 In contrast (and to show that Hardy did not have an unremittingly dour view of the possibility of love and companionship), the following poem is worth considering.  Now, I wouldn't exactly call it a cheery poem, but I would say that it holds out hope.  A Hardyesque hope, granted.  But hope.

I
If seasons all were summers,
And leaves would never fall,
And hopping casement-comers
Were foodless not at all,
And fragile folk might be here
That white winds bid depart;
Then one I used to see here
Would warm my wasted heart!

II
One frail, who, bravely tilling
Long hours in gripping gusts,
Was mastered by their chilling,
And now his ploughshare rusts.
So savage winter catches
The breath of limber things,
And what I love he snatches,
And what I love not, brings. 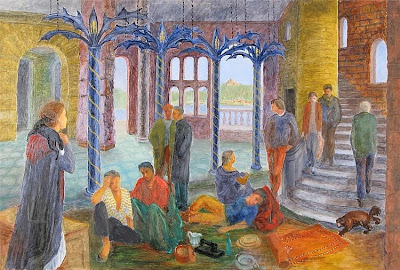 What lovely choices you have made, as always, with the selected poems and artwork.

I can't help but read the Farm-Woman's Winter without thinking of Tess up at Flintcombe Ash . . .

Bovey Belle: thank you for stopping by again. I'm pleased you liked the selections. As you've probably seen me say here before (and as you've no doubt noticed on your own), dipping into Hardy's Collected Poems is always an adventure -- you will almost certainly come upon something new or something you had forgotten. Although I have long admired "The Farm-Woman's Winter," I only discovered "The Division" recently.

I hadn't thought of Tess and Flintcombe Ash, but I see what you mean. The poetry and the fiction do often seem to be of a piece, don't they? I could see Hardy making a short story out of "The Farm-Woman's Winter" if he had a mind to.

As ever, thanks for your thoughts.

Billy Budd: thank you very much. I'm pleased you like the poems and paintings. I just recently discovered Charlton's work, and I like it a great deal.