"Something To Wear Against The Heart In The Long Cold"

Like Philip Larkin, R. S. Thomas is a victim of caricature.  To wit:  "The curmudgeonly, irascible God-doubting priest who refused to have a vacuum cleaner in his house because of the noise."  Or some variation on that theme.  Caricature is often an excuse for not reading poems.

Here is one way to dispense with caricatures.  Forget a poet's "Collected Poems."  Find a single small volume of his or her poems and try to read it as though you were coming to the poetry for the first time.  For instance, the following poem comes from a book that was published in 1958.

A Day in Autumn

It will not always be like this,
The air windless, a few last
Leaves adding their decoration
To the trees' shoulders, braiding the cuffs
Of the boughs with gold; a bird preening
In the lawn's mirror.  Having looked up
From the day's chores, pause a minute,
Let the mind take its photograph
Of the bright scene, something to wear
Against the heart in the long cold.

What does Thomas's life -- or the caricature of it -- have to do with this? Nothing, of course.

A side-note:  the final four lines of "A Day in Autumn" bring to mind Seamus Heaney's "The Peninsula" ("now you will uncode all landscapes/By this") and Derek Mahon's "Thinking of Inis Oirr in Cambridge, Mass." ("I clutch the memory still, and I/Have measured everything with it since"). 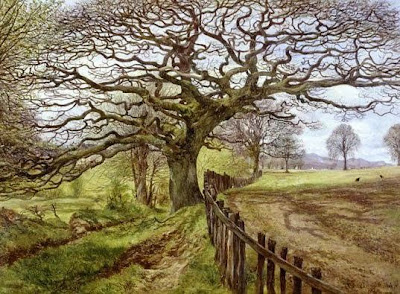 Now, here is a poem from a volume that was published in 1986.  Pretend you know nothing of Thomas.  Make no assumptions.

A Thicket in Lleyn

I was no tree walking.
I was still.  They ignored me,
the birds, the migrants
on their way south.  They re-leafed
the trees, budding them
with their notes.  They filtered through
the boughs like sunlight,
looked at me from three feet
off, their eyes blackberry bright,
not seeing me, not detaching me
from the withies, where I was
caged and they free.
They would have perched
on me, had I had nourishment
in my fissures.  As it was,
they netted me in their shadows,
brushed me with sound, feathering the arrows
of their own bows, and were gone,
leaving me to reflect on the answer
to a question I had not asked.
'A repetition in time of the eternal
I AM.'  Say it.  Don't be shy.
Escape from your mortal cage
in thought.  Your migrations will never
be over.  Between two truths
there is only the mind to fly with.
Navigate by such stars as are not
leaves falling from life's
deciduous tree, but spray from the fountain
of the imagination, endlessly
replenishing itself out of its own waters. 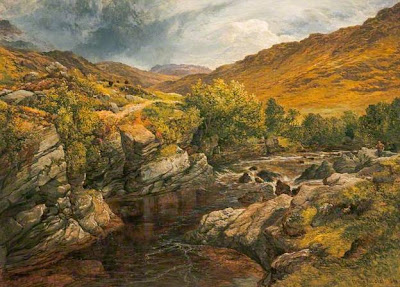 It is interesting to compare the poem with a parallel passage from Thomas's prose work A Year in Llyn (Blwyddyn yn Llyn), which he wrote in Welsh:

"I was in a thicket of willows.  As there was a light breeze, I could hear the sound of the distant sea, but it was perfectly quiet amongst the trees. Gradually, I noticed the number of goldcrests that were there.  The grove was full of them, flying hither and thither after the gnats.  I stood perfectly still and they started to come closer.  Some of them came within an arm's length on the branches, busily seeking their food, but hesitating nervously a moment to stare at the piece of wood that was different from the rest! They were so close I could see their dark eyes, like blackberry seeds.  And the air was continuously full of the rustling of their wings, as they jumped from one twig to another.  I almost expected to take one of them on my arm, but gradually they moved on in search of food, and complete silence returned to the trees, with only the sun's rays to remind me of the gold of their crests.  It is moments like these that remain in the memory and that repay you for the trouble of setting about knowing and understanding nature." 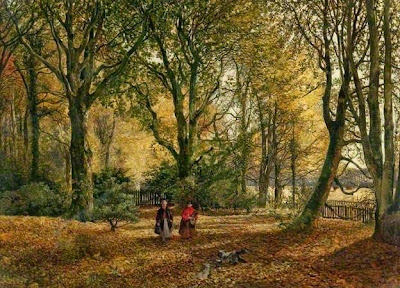 Having looked up
From the day's chores, pause a minute,
Let the mind take its photograph
Of the bright scene,...

I know little of R. S. Thomas and his poetry, knowing nothing of his being caricatured. I do know however that the poem--I had not read it before--you quoted, "A Day in Autumn," is simply beautiful, more than beautiful actually: it's a profound comment on the human predicament. We are limited of course in what we can do with what we are upon against in this world, our symbolic self, spun out self-consciousness, at war with our animal (and pitifully mortal) selves. But Thomas's remedy, no matter how short lived, brings that blessed moment of stasis, those few moments that the human imagination can transcend the petty, the retreat into anxiety and despair, and dark thoughts of that debt we all must pay.

Thomas's poem has all the magic of Keats's "To Autumn." Thank you for bringing this wonderful poem to your readers.

furtho: thank you very much for visiting, and for your comment. Yes, it is lovely, isn't it? And good advice as well.

Anonymous: thank you very much for your thoughts. I'm very pleased that you liked "A Day in Autumn," and it is my pleasure to have helped you discover it. I'm like you: when I first read it, I was astounded.

I completely agree with your comments about what the poem suggests -- it does, as you say, work "magic," and, as I stated in my response to furtho's comment above, it provides sound advice. I think that the sorts of moments described by Thomas (in "A Thicket in Lleyn" as well as in "A Day in Autumn") are why we are here for this short time.