A small tree stands by itself out in one of the fields that I pass through on my afternoon walk.  Each autumn I watch the tree's leaves turn red and then fall over the course of a few weeks.  In time, the lone empty tree is surrounded by a round pall of red.

I am reminded of a prose passage by R. S. Thomas:

"There was a large ash tree at the entrance to the rectory lane that would be completely yellow by November.  One autumn the leaves remained on it longer than usual.  But there came a great frost one night, and the following day, as the sun rose, the leaves began to fall.  They continued to fall for hours until the tree was like a golden fountain playing silently in the sun; I shall never forget it."

Thomas revisited the incident in a later essay:

"At the end of the lane from the rectory to the main road, there was a very large ash tree.  The leaves remained on it very late one autumn, and all yellow.  But one night in November it froze hard until, when morning came, everywhere was white.  There was no wind, but as the sun rose above the hill, the leaves began to thaw in its modest warmth and then fall.  For two hours or more it was as if a golden fountain were playing there, as the leaves fell to form a thick carpet covering the road." 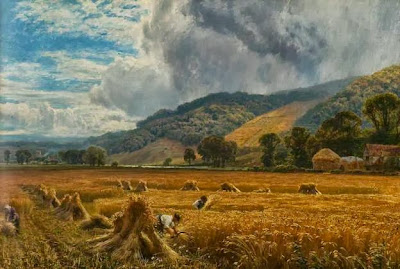 In a previous post regarding Thomas's poem "A Thicket in Lleyn," I noted that the poem was based upon an experience that Thomas also described in prose.  The same thing occurs with respect to the ash tree that became a fountain of leaves.

I know that bush,
Moses; there are many of them
in Wales in the autumn, braziers
where the imagination
warms itself.  I have put off
pride and, knowing the ground
holy, lingered to wonder
how it is that I do not burn
and yet am consumed.

And in this country
of failure, the rain
falling out of a black
cloud in gold pieces there
are none to gather,
I have thought often
of the fountain of my people
that played beautifully here
once in the sun's light
like a tree undressing.

The beginning of "The Bush" immediately brings to mind lines from Thomas's "The Bright Field":  ". . . It is the turning/aside like Moses to the miracle/of the lit bush, to a brightness/that seemed as transitory as your youth/once, but is the eternity that awaits you."  Likewise, the final lines of the poem are reminiscent of the final lines of "A Thicket in Lleyn":

Navigate by such stars as are not
leaves falling from life's
deciduous tree, but spray from the fountain
of the imagination, endlessly
replenishing itself out of its own waters. 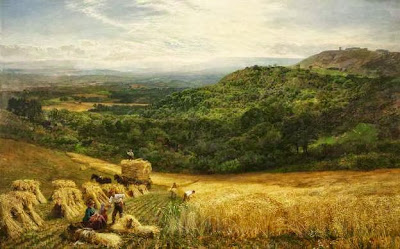 Charles Tomlinson has written about a similar experience.

One Day of Autumn

One day of autumn
sun had uncongealed
the frost that clung
wherever shadows spread
their arctic greys among
October grass:  mid-
field an oak still
held its foliage intact
but then began
releasing leaf by leaf
full half,
till like a startled
flock they scattered
on the wind:  and one
more venturesome than all
the others shone far out
a moment in mid-air,
before it glittered off
and sheered into the dip
a stream ran through
to disappear with it 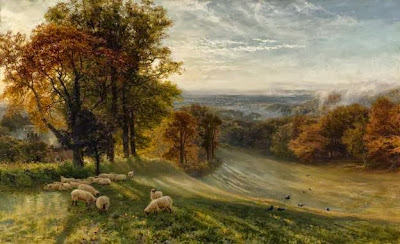 Mr Pentz, Thank you for these prose writings of R.S Thomas. I was not that familiar with his prose and it enlightening to see how he uses these incidents in later poems.
I do like the Charles Tomlinson poem too. I have a couple of volumes of his poetry at home, reading this has prompted me to take them down from the shelves again where I know they have sat unopened for too long.

I have been away for a few days walking and enjoying the beautiful woods of the Surrey Hills. We have had a lot of rain, but such colours to see and scents to breathe.

Mr Ashton: you are fortunate to have gotten away to such a beautiful place. I was lucky enough to have driven across the North Cascades Highway through the North Cascades National Park over the weekend. The autumn foliage is not close to what it must be in England, but, still, the yellow-leaved aspens and birches in the valleys and in patches (along creek beds) up to the treelines were lovely. And the mountains were breathtaking.

I have only recently began to look into Thomas's prose. As you might expect, it is like his poetry: unsparing, but with passages of beauty.

It has been a while since I have visited Tomlinson's poetry as well. Whenever I do, I always wonder why I have been away so long.

Mr Pentz, the Surrey hills are indeed beautiful and I thoroughly enjoyed my time walking there. However I feel they may not be as stunningly beautiful as the North Cascades National Park. I searched on Google from sheer curiosity. You are very fortunate to have such spectacular landscapes close at hand. My only visit to America was some years ago, travelling around New England, which of course is also very beautiful.

Mr. Ashton: yes, I am fortunate. But I confess that I tend to take our mountains for granted, having been near them for so long. They can always be seen in the distance (on our clear days!): the Olympics to the west over Puget Sound and the Cascades to the east. But I rarely take the time to get up into the middle of them. When I did so this past weekend, I realized what I have been missing.

Still, I tend to favor the countryside for some reason. It may be the poetry I've read over the years. And it seems more hospitable -- although I'm not sure that's exactly the word I'm looking for. I'm more of the Henry Ryecroft type (which you'll understand).

Mr Pentz, I think we can perhaps all be guilty of taking for granted what lies at our doorstep.
I understand your favouring of the countryside. When I daydream, or sit idly it is always with images of the English countryside in my mind, and of course I would concur with you; Ryecroft's dream and my own too, have many points of similarity.
I lost my copy of Ryecroft some years ago by foolishly leaving it on a table in a cafe. Of course when I went back it had gone. It has been a particulary difficult book to find over here for some while now. Copies are either very expensive or poor quality. A recent paperback edition was very poorly produced. Fortunately I was recently successful in locating a copy published in the early 1950's with some beautiful line drawings at the beginning of each section. I am very much looking forward to reading it again, one of my favourite books. Which you will, I'm sure, understand.

Mr Ashton: that sounds like a lovely copy of Ryecroft. I have the paperback Oxford "World's Classics" edition with a nice image of Lucien Pissarro's "High View, Fishpond, Dorset" on the cover. The annotations by the editor are very helpful -- especially to an American, since they cover some finer points of English culture that I wasn't familiar with. I've become attached to it, so I can understand how you would have felt at the loss of your first copy.