In his later years, R. S. Thomas lived in a stone cottage near the sea on the Lleyn Peninsula in Wales.  I recently came across a poem of his that I had completely forgotten.  It dates from his years on the Peninsula.  I was immediately reminded of Patrick Kavanagh's "My Room" (which I posted here last month), and, in particular, its final stanza:

My room is a musty attic,
But its little window
Lets in the stars.

Few possessions: a chair,
a table, a bed
to say my prayers by,
and, gathered from the shore,
the bone-like, crossed sticks
proving that nature
acknowledges the Crucifixion.
All night I am at
a window not too small
to be frame to the stars
that are no further off
than the city lights
I have rejected.  By day
the passers-by, who are not
pilgrims, stare through the rain's
bars, seeing me as prisoner
of the one view, I who
have been made free
by the tide's pendulum truth
that the heart that is low now
will be at the full tomorrow.

"A window not too small/to be frame to the stars" is what got me to thinking of Kavanagh's "its little window/Lets in the stars."  The poem also brings to mind James Reeves's "Animula":  ". . . An old soul/In a narrow cottage . . ."

I recently suggested that, lest we lose sight of his poetry, we should be wary of the prevalent caricature of Thomas as a curmudgeon.  That being said, I concede that Thomas's disposition was not exactly, shall we say, a welcoming one.  He was by nature an anchorite who was a little grumpy. But, to his credit, he does not dissemble in his poetry:  harshness coexists with beauty.   Like life.

In Wales there are jewels
To gather, but with the eye
Only.  A hill lights up
Suddenly; a field trembles
With colour and goes out
In its turn; in one day
You can witness the extent
Of the spectrum and grow rich

With looking.  Have a care;
This wealth is for the few
And chosen.  Those who crowd
A small window dirty it
With their breathing, though sublime
And inexhaustible the view.

The lines "A hill lights up/Suddenly; a field trembles/With colour and goes out/In its turn" bring to mind one of Thomas's finest poems -- a poem which has appeared here before, but which is always worth revisiting. 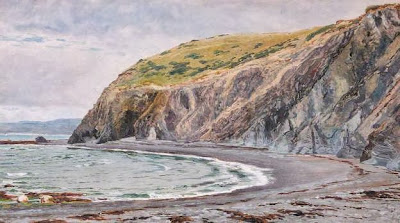 I have just come across Robert Nichols' poetry - it seems to strike a chord with your recent posts. He was a friend of artist (and poet) Cecil Collins.
E. Berris

Mr Pentz, Thank you for the R S Thomas poems you have been posting.I have my own copy of his Collected Poems, but I never tire of reading his poetry and the rediscovery of poems I have'nt read for while prompts me to open the pages of that volume again.
I thought you might be interested in the following short article which I stumbled upon quite recently. Here is the link:

My only exposure to Nichols' poetry is through reading a few of his poems in anthologies. Thus, I am not familiar with his work as a whole. I appreciate the recommendation -- I'm going to see what's available by him on the Internet Archive site.

Mr Ashton: there's a lot to cover in his Collected Poems, isn't there? I've also discovered over the years that he left quite a few poems out of his "collected" poems. For instance, "A Day in Autumn," which I recently posted, was left out. Which I find difficult to understand, since it is such a fine poem.

He's like Hardy and Christina Rossetti: there is always something new or forgotten to come upon. But I find that I have to be in a certain mood to dive into Thomas's poems, whereas I can pick up Hardy's or Rossetti's poems any day. He poses more of challenge is my only thought -- although, as you know, Hardy and Rossetti can be every bit as "pessimistic." Perhaps it is his rough edges (emotionally, not technically). I'm not sure.

Thank you for the link to the article: I haven't had a chance to track it down yet, but I will.

Mr Pentz, I agree with about Thomas's poetry and being in a certain frame of mind to read him, but that for me is what makes him so wonderful to read. He confronts and does'nt shy away from the more difficult and painful moments, and though he can sometimes seem harsh, he is often equally hard with himself. As a compensation there are also moments of great beauty. A day in Autumn being an instance of this.

Mr Ashton: well said. You are right: those moments of beauty are what bring me back. Sort of like what he describes in "The Bright Field"!

William Blake says that we must learn to see not with the eye but, rather, through it, meaning, I gather, that the imagination or a self-conscious sensibility interprets and evaluates what the eye merely sees.

In short, all eyes can look through a window, but few can "see" what is really out there. (Wordsworth speaks to this notion of the imagination working with nature to create meaning in his poem written about his visit to Tintern Abbey.)

Thomas sees a great deal from his window, much more than the photograph his eyes take. The more I read of Thomas the more I admire his poetry. Somehow along the way I missed him. Thank you for bring him to the attention of your readers. Many of them will no doubt like me seek out his poetry.

Nobody, to my mind, saw more from a window than the reclusive Emily Dickinson. though she asserts time and time again that she is never lonely. Here's what she sees from the window in her ascetic room, this diminutive woman sitting alone at her writing table and gazing from the window, her intent to apprehend what the prosaic mind cannot:

Was the Pine at my Window a "Fellow
Of the Royal" Infinity?
Apprehensions—are God's introductions—
To be hallowed—accordingly—

Mr. Floyd: if I have helped to introduce R. S. Thomas's poetry to you and others, it is my pleasure to have done so.

Thank you for another poem by Dickinson. The poems of hers that you have shared always fit well with the subject at hand, and this one is no exception. I like her idea of the World as a Sea. The final stanza is particularly lovely.