A Christmas Robin, Out Of Season

The snows of February had buried Christmas
Deep in the woods, where grew self-seeded
The fir-trees of a Christmas yet unknown,
Without a candle or a strand of tinsel.

Nevertheless when, hand in hand, plodding
Between the frozen ruts, we lovers paused
And 'Christmas trees!' cried suddenly together,
Christmas was there again, as in December.

We velveted our love with fantasy
Down a long vista-row of Christmas trees,
Whose coloured candles slowly guttered down
As grandchildren came trooping round our knees.

But he knew better, did the Christmas robin --
The murderous robin with his breast aglow
And legs apart, in a spade-handle perched:
He prophesied more snow, and worse than snow. 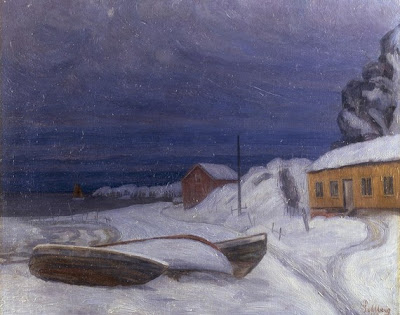 I am familiar with Graves' work. Undoubtedly he is imbedding, along with many other things, a sly reference to the name "Christmas," a term of death and mourning. And prophesying snow in February rather than December - I detect that characteristic laughter through the tears at human folly. Nice choice pre-solstice!

That last line--"He prophesied more snow, and worse than snow." reminds me of Frost.

I've never really looked into Graves' poetry. Is this typical of his works?

Consultoria RH: thank you very much for visiting, and for your kind words. (I confess that, unfortunately, I do not know Portuguese. Thus, I had to rely upon Google Translate.) Thank you again. I hope that you will return.

Thanks for your thoughts, Mr. Sigler. Good points. There is also the characteristic Graves concern with love -- he may be thinking of a doomed future for the relationship as well. Thanks again.

Fred: it's funny you should mention Frost in connection with the poem: I have long thought that the final line sounds very "Frostian." I wouldn't say that you hear Frost-like echoes in Graves like you might in Edward Thomas. But perhaps his commitment to traditional metrical verse brings in the Frost. I do know that he wrote an introduction to a selection of Frost's poetry that suggested that he was an admirer. I don't have a copy handy, but I should revisit it, now that you mention Frost.