Hemlocks And Peacocks: "Turning In The Wind, Turning As The Flames Turned In The Fire"

R. S. Thomas's "Winter" reminded me of one of Wallace Stevens's finest poems.  It is a poem that Stevens wrote in his dandyish, rococo earlier years, and it exhibits some of the verbal playfulness of that time.  However, it also has the simplicity of statement that marks his wonderful late poetry (i.e., the poems that he wrote when he was in his seventies).  Which is not to say that the poem is "simple."  Stevens is rarely easy.  But the poem may change the way you think of hemlocks and peacocks.

At night, by the fire,
The colors of the bushes
And of the fallen leaves,
Repeating themselves,
Turned in the room,
Like the leaves themselves
Turning in the wind.
Yes: but the color of the heavy hemlocks
Came striding.
And I remembered the cry of the peacocks.

Out of the window,
I saw how the planets gathered
Like the leaves themselves
Turning in the wind.
I saw how the night came,
Came striding like the color of the heavy hemlocks.
I felt afraid.
And I remembered the cry of the peacocks.

Here is something that may be worth considering:  might the peacocks have something to do with A Rabbit as King of the Ghosts?  And how does The Candle a Saint fit in? 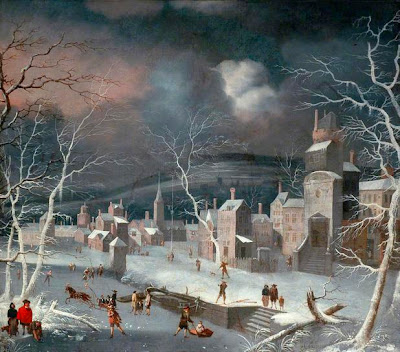 Since there were "words had" between Rita Dove and Helen Vendler in the NYRB about Dove's treatment of Stevens in her new anthology, I'd be interested as a writer in hearing your reflections on that situation.

Thank you for visiting again, Shelley. I agree with Helen Vendler.