No.  The times are not "historic."

then I tried the garden
it gave me a gentle smile

now winter is drawing near. 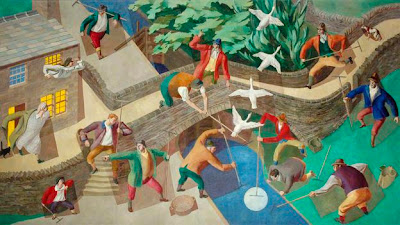 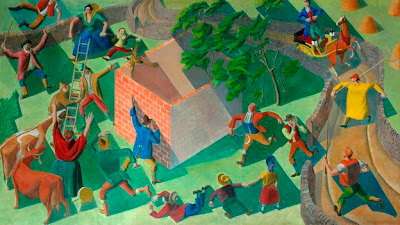 For further perspective on "history," you may wish to take a look at Patrick Kavanagh's "Epic" and Thomas Hardy's "In Time of 'The Breaking of Nations.'" 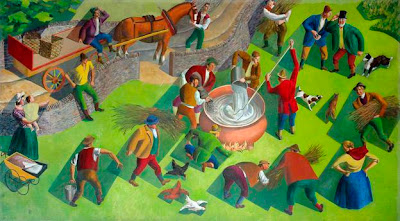 Charles Napier (and students), "Linthwaite Leadboilers" (1940)
Posted by Stephen Pentz at 12:10 AM

I love this kind of perspective! Thank you, thank you! First off, since you did ask a bunch of excellent questions, I’ll try to answer them.

“What is "historic" about having to pay one's bills?”

O for the glorious days of youth when I had only to worry about paying my own bills instead of, to name just one recent example, the collective debt of Europe that was just foisted on the US taxpayer in the latest doomed attempt to rescue European banks from free market accountability. As Everett Dirkson once said, it eventually ends up being real money, and we’re getting dangerously close to the point where people realize money isn’t real independently of our belief in it.

“What is "historic" about politicians (presumed, with an excess of charity on our part, to be adults) throwing tantrums and jumping up and down like children who cannot have their way?”

What’s new is children are realizing they have to be adults about the world they will inherit, and doing things like, say, resuscitating the Constitution: Constitutional Convention.

“What is "historic" about yet another utopian Ponzi scheme coming to grief?”

What’s different is that the utopia involved is the world most of us regard as objective material reality, and the scam artists are the people who are accustomed to running the world. I for one want popcorn to watch that one come to grief.

As I watch Summer emerge in New York City December, I’m not even sure the eternal and poetic isn’t drinking some kind of new energy drink.

But all those quibbles aside, you are of course exactly right. History is a tale told by an idiot, and the stars, despite Hardy’s best efforts, aren’t talking. And what’s the point of it all that past and future talk anyway, when we hear

“What's history to him?
He's an emblem of it
in its pure state”

to remind us that we’re big enough to fill the present, yes?

could be an haiku.

I suppose this sounds strange, but the thought occurred to me that maybe I should also do that every night just before turning in.

The Poems of Norman MacCaig ..and the first sentence ..Last thing at night
he steps outside to breathe
the smell of winter..really touching!!i do that a lot from my balcony..what a great poet!!I must read nmore about him..i think it is soo bad we only live once..and not be able to read and get to know all the wonderful people and things there is in the world..But thank you for showing me and introduce to the land of lyrics!!

about history..and Europe and rest of the world and historic times..well i agree with you..Iam soo happy Norway did not go into that membership..and we never will..They have to work more..and pay their bills..so if they do so in a couple of years..may be it will turn around..you know..they say Norway is one of the richest countries in the world..you know why??Cause we work since we are little..and most of us dont get into pension before 70..but we can go when 62..have the pension work beside and have a good life..i think..if you wanne a good economy..one must not get fooled to buy and buy...of course on e must buy soemting..becuse the weels have to go around..but luxery no....later maybe..in our land just know we are concern about Behrings punishment..as we know he is declared insane..but well you tell me..he is a clever one..declared insane??and out in 2-3 years??boy oh boy..they have to do some serious changes in our laws punishment..prison in life time is only 15 years..or was it 20..here.and we dont have any death penalty..ok sorry about writing soo much..it is early in the morning and i am full of energy..Thank you for nice post!!))

Julie: thank you very much for visiting again, and for your thoughts. I agree with your conclusion about the persistence of art and poetry: for that we can all be thankful. Thanks again.

Mr. Sigler: thank you for stopping by, and for your thoughts.

I'm afraid that you and I will have to agree to disagree about the novelty or uniqueness of our current economic situation. The way I see it, Ludwig von Mises and F. A. Hayek predicted all of this 70 or 80 years ago. For that matter, Charles Mackay predicted it as well in 1841 in Extraordinary Popular Delusions and the Madness of Crowds. There is nothing new under the sun.

That being said, you and I do at least agree on the worth of the poems!

Fred: your idea about stepping outside at night like a crofter does not sound strange at all. I agree with you about the first stanza. I think that the final stanza (less the first sentence) could pass as a haiku as well.

Anita: thank you for stopping by again, and for your comments. I think that you are fortunate to live in Norway -- especially at this beautiful time of year!

Your point I take it is that Mises’ and Hayek’s diagnosis having been proven correct, why hasn’t the patient died? I’m not nearly as apocalyptic as the Austrian School (i.e. I don’t think "the default of future labor" has to involve the total collapse of the system), nor was my point to be a Cassandra. It was simply to show, given the fairest reading of events, that the poetic perspective trumps the merely historical. I apologize for any offense taken.

Mr. Sigler: I took no offense at all, so no apologies are necessary. But now I worry that perhaps my response to your original comment sounded overly vehement! It wasn't intended to be so. I apologize if I didn't express myself clearly.

The only point that I was trying to make is that I find nothing surprising or unique about the current state of affairs. I brought up von Mises, Hayek, and Mackay as examples of how these events could easily have been foreseen by anyone who was willing to pay attention. For that matter, I could have also pointed out that it has been evident for quite some time that the demography of Europe (i.e., its declining birth rate and its aging population) would inevitably bring these Ponzi schemes to an end.

I hope that those observations do not come across as an attack on your views. They were not intended as such. As I said, I find it best to agree to disagree when it comes to these economic/political matters. After all, you and I are in full agreement on the most important point (to use your excellent phrase): "the poetic perspective trumps the merely historical."

As always, I greatly appreciate your thoughts.


Last thing at night
he steps outside to breathe
the smell of winter.

He goes inside.
The door closes and the light
dies in the window.


Yes, definitely. It's a haiku also.

I stepped outside last night before going to bed. That last breath took longer than I had planned as Dusky, the Grey Mouser, decided she wanted a last breath of winter too.

Fred: I've been noticing that a number of MacCaig's poems have a Chinese and Japanese feel to them. I don't know enough about him to know whether he read Chinese and Japanese poetry, or if the correspondences came naturally. Either way, it is interesting to see the parallels from opposite sides of the planet.

I'm glad that you are stepping outside -- it is probably a bit chilly at night in Tucson this time of year.