"A Lowly Hope, A Height That Is But Low"

It is time to leave the sandy shores (and deserts) of Time and Mortality.   However, before we depart, I cannot resist a visit to two sea-side poems by Christina Rossetti.

A lowly hill which overlooks a flat,
Half sea, half country side;
A flat-shored sea of low-voiced creeping tide
Over a chalky weedy mat.

A hill of hillocks, flowery and kept green
Round Crosses raised for hope,
With many-tinted sunsets where the slope
Faces the lingering western sheen.

A lowly hope, a height that is but low,
While Time sets solemnly,
While the tide rises of Eternity,
Silent and neither swift nor slow.

Birchington is located in Kent.  Dante Gabriel Rossetti, Christina Rossetti's brother, was buried in All Saints Churchyard in Birchington in April of 1882.  Rossetti wrote the poem that same month.  There are many fine things about the poem, my favorite being "A lowly hope, a height that is but low."  (Note the anticipatory "lowly hill" in the first line, "low-voiced creeping tide" in the third line, and "Round Crosses raised for hope" in the sixth line.)  And then, just when you think that it couldn't get much better, comes this:  "Silent and neither swift nor slow."  (And "a hill of hillocks" is no small thing either.) 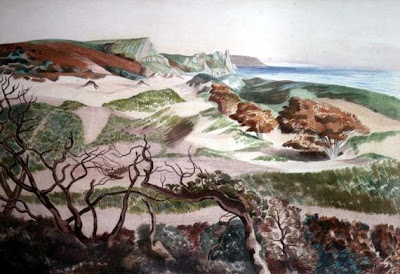 Cold as the cold Decembers,
Past as the days that set,
While only one remembers
And all the rest forget, --
But one remembers yet.

In a note to the poem, William Rossetti writes:  "It would seem to most people that these lines also relate to Birchington; my belief, however, is that they relate to Hastings, where Charles Cayley lies buried."  Charles Cayley proposed to Christina Rossetti in 1866, but she declined.  It is speculated that she loved Cayley, but did not wish to marry him because he was an agnostic, while she was a devout "High Church" Anglican.  He died in 1883.  The poem was written in the spring of 1884. 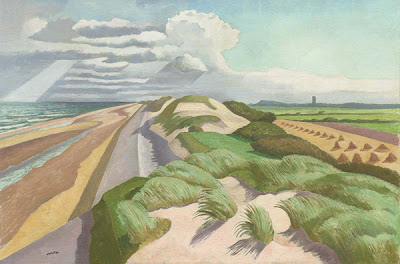 John Nash, "Norfolk Coast"
Posted by Stephen Pentz at 12:10 AM