As we are still in "Christmastide" as traditionally defined, the following poem by Thomas Hardy remains in season.  It is worth a chuckle to see gloomy T. H. greeted with stubborn good will when he least expects it.

A cheerful voice called, nigh me,
'A merry Christmas, friend!' --
There rose a figure by me,
Walking with townward trend,
A sodden tramp's, who, breaking
Into thin song, bore straight
Ahead, direction taking
Toward the Casuals' gate.

"The Casuals' gate" was an entry to the "Union House" (the workhouse) in Dorchester.  "In Hardy's time any 'casual' (pauper or tramp) could apply to the police for a ticket, with which he would be admitted for supper, a bed, and breakfast." J. O. Bailey, The Poetry of Thomas Hardy: A Handbook and Commentary (1970), page 581. 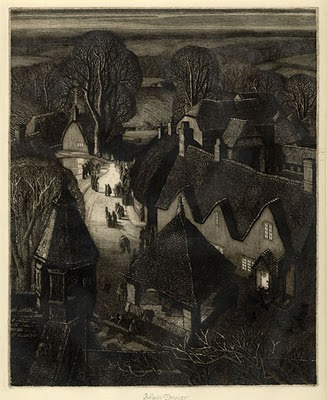 There goes the beloved Hardy again, bemused by the less fortunate who so often are grateful for so little. Hope yours was a merry one, Stephen.
j
looks like the artwork might be a etching?
Beautiful and appropriate whatever it is.

Thank you very much, Julie.

Yes, it is an etching. I think that it is my favorite work by Tanner.