With frost on the roofs in the mornings, it feels like winter has arrived.  It is nice to see the bare, intricate branches of the trees against the sky again. Not to mention the snowmen, reindeer, Santa Clauses, and (occasionally) penguins standing on the porches and lawns, aglow from within.  The world is as it ought to be:  clear and sharp and cheerful.  For a while, for a while. 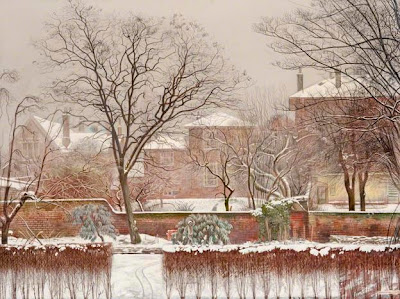 On the eaves
A robin sings, with berry eyes
And breast redder than the dead leaves
Dangling his notes like beads,
A luminous, tinkling string.
A robin sings in the evening,
Under smoky December skies --
And so would I sing.

In the sky
A star shines on the kerb of day.
The waking night from light-bleared eye
With one clear, glowing tear is weeping,
Dipping its lids to mine.
A star shines in the dusk,
Not frosted yet by the Milky Way --
And so would I shine. 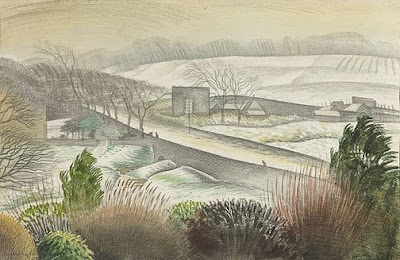 I'd say I like your introduction better than the poem, but that's one incredible poem, not only capturing the special light and feel of December, not only channelling a robin like no other poem I've ever seen, not only representing Northern England's great sonic mines like a beast, but nicely capturing, in voice and witness, the impossibility of poetry.

Mr Sigler: I'm pleased that you like Nicholson's poem. Thank you very much for your kind words about my introduction, but I'm afraid that (as the pop culture saying goes): "I'm not worthy." (Where did that start? Was it "Wayne's World"? Ah, the things we can't get out of our heads these days!)

It's always good to hear from you.

Mr Matarazzo: thank you for visiting again and for your very kind words about my introduction. One of those afternoon walk effusions. Nicholson beats me hands-down, of course! But I am greatly flattered that you liked it.