What is poetry?  If someone were to ask me that question, I would tell them that I am not qualified to answer.  Instead, I would ask them to read this poem: 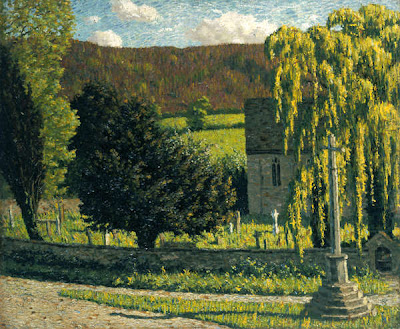 In terms of sound and sense, words and meaning, form and feeling, I believe that this is as close to perfect as poetry can get.  On a previous occasion, I attempted to discuss a few of the many fine things about this poem, so I will not repeat that discussion here.

Although I cannot define "poetry," I can say that one mark of a good poem is that it follows you over the years:  it haunts you (in a good sense); it returns when you least expect it.  Thus, in recent months I have encountered two poems that brought me back to "A slumber did my spirit seal."  And now, by mere chance, I have three lovely poems circling around one another. 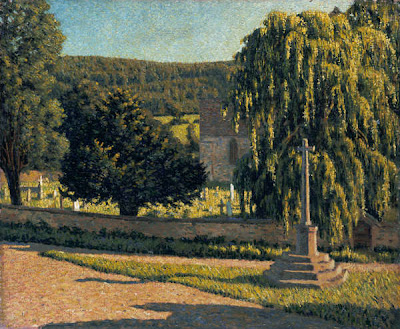 First, I came across this:

Lay a garland on my hearse
Of the dismal yew;
Maidens, willow branches bear,
Say I died true.

My Love was false, but I was firm
From my hour of birth.
Upon my buried body lay
Lightly, gently, earth.

Francis Beaumont/John Fletcher, The Maid's Tragedy (1622), in Norman Ault (editor), Elizabethan Lyrics (1949).  The poem is sometimes titled "Aspatia's Song" because it is spoken by a character of that name in Beaumont and Fletcher's play. 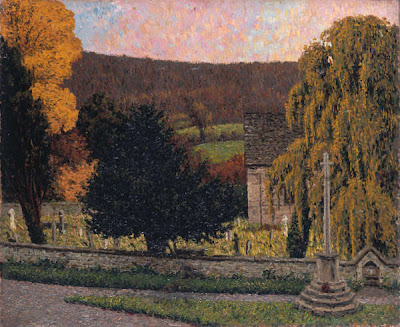 A month or so later, I discovered this:

The honey-throated nightingale, our Musa the blue-eyed
This narrow tomb claimed suddenly where she doth voiceless bide:
For all her art and all her fame, stone-still she lies to-day:
And over thee, our Musa fair, light lie the dust for aye.

The poem is a translation by Bullen of an anonymous poem in The Greek Anthology.  Bullen was well-known in his time as the editor of a number of editions of Elizabethan verse and drama, and as the founder of the Shakespeare Head Press, which was located in Stratford-upon-Avon.  He self-published two volumes of poems (of 25 copies and 30 copies), which he gave to friends only.  After his death, Weeping-Cross and Other Rimes was issued.  It contains forty poems.

Given Bullen's interests, it is not surprising that his translation of the Greek original has an Elizabethan feel to it. 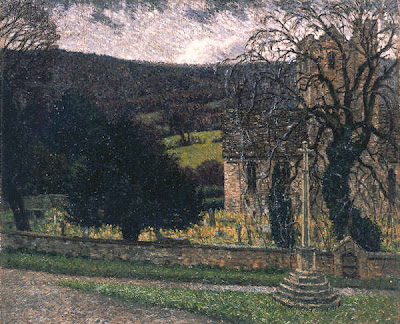 I encounter this question all the time in the two classes I teach: Elizabethan poetry and Literary Criticism. In the first one, students start to study English poetry proper starting with the golden age of Shakespeare and as they notice the enthusiasm of their teacher toward poetry, they tend to question this form of literature and what kind of significance it has in our life!
In the second class, I usually advance such question to motivate my students to think critically about the poetry they have studied. However, I always think of Marian Moore's definition of poetry "imaginary gardens with real toads in them"

I once saw a pageful of answers to that question, all by various poets.

I liked Frost's definition the best--"Poetry is what gets lost in translation."

Ms. Mohammad: I'm happy to hear from you again.

Regarding your comments (especially the one about students being exposed to poetry for perhaps the first time): I sometimes think that love of poetry is perhaps something that we are born with. I am not suggesting that people who love poetry are different from, or better than, other people -- far from it -- but there may be an innate disposition towards it. Just as some people are musically inclined, artistically inclined, or athletically inclined. Of course, some sort of early exposure to it is required -- which you, as a teacher, provide.

Thank you very much for stopping by again. I always appreciate hearing from you.

Fred: yes, I know what you mean. I feel that the best response may be "I know it when I see it." Frost's definition is a good one, as is another of his definitions (which I know that you are familiar with): poetry "begins in delight . . . and ends in a clarification of life -- not necessarily a great clarification, such as sects and cults are founded on, but in a momentary stay against confusion." That seems right to me.

As always, it's good to hear from you. Thank you very much for visiting again.

"light lie the dust for aye."

It's interesting that gravestone inscriptions are among the most culturally conserved literary artifacts one can find.

The request that the earth rest lightly on the deceased is one of the most common inscriptional formulae on ancient Greek and Roman gravestones. The Latin formula is "sit tibi terra levis," often abbreviated in ancient inscriptions as s.t.t.l.

A bit more is here:

Bob: thank you very much for sharing that information, which I wasn't aware of. It adds greatly to my appreciation of the Beaumont/Fletcher poem and Bullen's translation -- as well as of any poems that I may come across in the future with that image.

I'm catching up with you on a fine London summer morning ... another lovely post. Thank you.

I'm always delighted to see a poem that I know has been set to music. This time "Lay a Garland" by Robert Pearsall (1795 - 1856) who adapted the words and set this:

This weekend the choir I sing with will be performing, among other things, a set of six Emily Dickinson poems set by a contemporary Belgian composer called Raymond Schroyens. I'd never come across his music before; it is really lovely music. The final setting is of "I Died For Beauty" which I guess you probably know:

I died for beauty, but was scarce
Adjusted in the tomb,
When one who died for truth was lain
In an adjoining room.

He questioned softly why I failed?
"For beauty," I replied.
"And I for truth - the two are one;
We brethren are," he said.

And so, as kinsmen met a-night,
We talked between the rooms,
Until the moss had reached our lips,
And covered up our names.

I love the slightly jarring quality of the final non-rhyme. It brings us up short ... It's a great setting by Schroyens (sadly never recorded), and leaves me with goosebumps every time ...

I too was struck with the line that you chose for the title of this blog entry: "The ghost dogs in the vanishing gardens" ... I've recently been collating my late parents' photographs and scrutinising innumerable box brownie negatives and seeing the ghost dogs in them ...

Eamonn: it's great to have you stop by again -- I've missed hearing from you.

You are always a fine source for poems that have been put to song settings! As usual (due to my ignorance of the form), I wasn't aware of the setting for "Lay a Garden." I will track it down. I hadn't heard of Raymond Schroyens either: although his Dickinson setting is not recorded, I will search out some of his other works. A quick search tells me that he turns 80 this year, so I'm certain he has a substantial body of work.

Yes, "the ghost dogs in the vanishing gardens" is very nice, isn't it? I suppose that negatives are nearly a thing of the past, aren't they?

As ever, thank you for the visit.