This afternoon I walked down a green tunnel of trees.  Is there anything lovelier than to stand beneath a tree in summer looking up through the interlaced leaves into a blue sky?  Especially if the leaves are rustling in a breeze?  I can think of no better way to spend Eternity.

Which leads me to Thomas Hardy.  Although I don't know why. 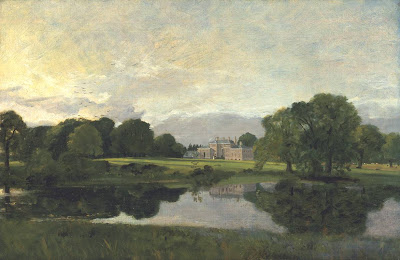 A world I did not wish to enter
Took me and poised me on my centre,
Made me grimace, and foot, and prance,
As cats on hot bricks have to dance
Strange jigs to keep them from the floor,
Till they sink down and feel no more. 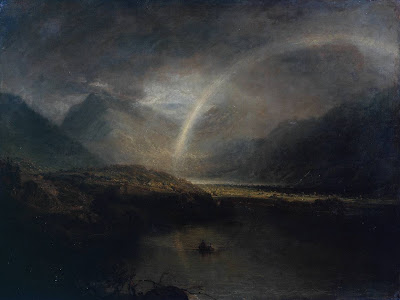 Epitaph on a Pessimist

I'm Smith of Stoke, aged sixty-odd,
I've lived without a dame
From youth-time on; and would to God
My dad had done the same.

Hardy includes this note to the poem: "From the French and Greek."  Hardy owned a copy of J. W. Mackail's Select Epigrams from the Greek Anthology (1906), which contains the following translation of a Greek epitaph:  "I Dionysius of Tarsus lie here at sixty, having never married; and I would that my father had not."  J. O. Bailey, The Poetry of Thomas Hardy: A Handbook and Commentary (1970), page 557.  "Dionysius of Tarsus" becomes "Smith of Stoke" in order to bring us up-to-date.

Hardy's sympathetic reading of Schopenhauer is perhaps reflected in "Epitaph on a Pessimist."  Schopenhauer opined that, when all is said and done, not having been born may have been the best option for us.  Giacomo Leopardi, who Schopenhauer admired, came to the same conclusion.  Yes, it sounds harrowing, doesn't it?  But, when you read Schopenhauer and Leopardi, they are two extremely jolly fellows, and are quite entertaining about the whole business.

A race with the sun as he downed
I ran at evetide,
Intent who should first gain the ground
And there hide.

He beat me by some minutes then,
But I triumphed anon,
For when he'd to rise up again
I stayed on.

"Epitaph on a Pessimist" and "Cynic's Epitaph" were published together in the September, 1925, issue of The London Mercury, when Hardy was 85. 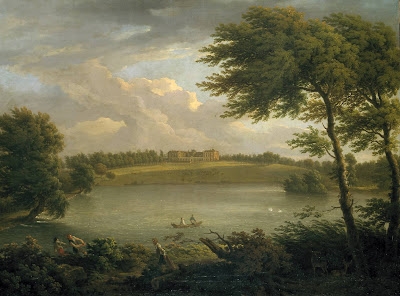 George Lambert,
"View of Copped Hall in Essex, from Across the Lake" (1746)

Hardy wrote all of these epitaphs when he was in his eighties.  Thus, he would seem to be trying them on for himself.  But we are all cynics and pessimists and necessitarians at some point in our lives, aren't we?  For all of Hardy's supposed pessimism, his compassion for, and his empathy with, his fellow human beings never wavered.  The epitaphs are for him and for each of us.

As for my life, I've led it
With fair content and credit:
It said: 'Take this.'  I took it.
Said: 'Leave.'  And I forsook it.
If I had done without it
None would have cared about it,
Or said: 'One has refused it
Who might have meetly used it.' 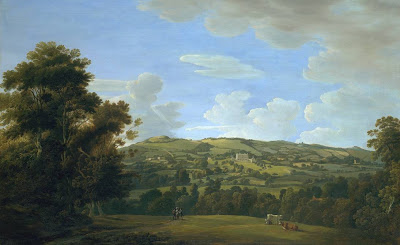 I never cared for Life: Life cared for me,
And hence I owed it some fidelity.
It now says, 'Cease; at length thou hast learnt to grind
Sufficient toll for an unwilling mind,
And I dismiss thee -- not without regard
That thou didst ask no ill-advised reward,
Nor sought in me much more than thou couldst find.'

Thomas Hardy, Late Lyrics and Earlier, with Many Other Verses (1922). "Toll" (line 4) is "a proportion of the grain or flour taken by the miller in payment for grinding."  OED.

I think that the final two epitaphs best describe Hardy himself. 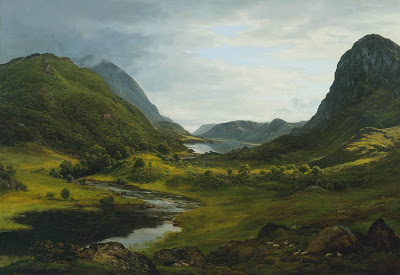 Could it be "tunnel" lead you down that train of thought? ;-)

Are you familiar with Giacomo Leopardi's "Amore e Morte"? Speaking Italian, I prefer the original version, but I found this English translation, at Poemhunter.

Merisi: thank you very much for the links to Leopardi's poem. I have a copy of Jonathan Galassi's translation of the Canti. His translation of "Amore e Morte" begins: "Fate gave birth at one and the same time/to two siblings, Love and Death." Later, he translates lines 74-75 as: "So the law of love/inclines toward death."

For all of his gloom, I do enjoy reading Leopardi. I wish that I was able to read him in Italian!

As always, it is very nice to hear from you. I appreciate your taking the time to visit and comment.

Hardy wrote such a prolific corpus of poetry during his long life, I must confess I am not familiar with all of them. (Or should I be an honest realist and say "many" of them?!)

The first epitaph leaves me very uncomfortable (as a cat-owner, you understand!) The second makes me smile - and I stand in admiration of your being so well-read.

The final two DO sum up Hardy quite well, I feel. Indeed, he survived into long life despite having been laid aside and ignored as stillborn. On a slightly later occasion, an adder was found curled up with him in his crib . . . So it was intended that he made old bones, it would seem. Life DID care for him. Not sure about his unwilling mind though . . . unless he is referring to his novels, which I think he thought were the penance that paid him to write his poetry?

Bovey Belle: thank you for your thoughts on Hardy and his epitaphs. Yes, Hardy's poetry is a life-long project, isn't it? I have been trying to make my way through all 947 of his poems for decades, but I still have a long way to go! But I never cease to be surprised and delighted by him.

I too like the incident of the snake in his crib: it does seem to be a sign of some sort, doesn't it? Almost an archetypal Hardy fictional invention that actually happened. "Unwilling mind" puzzles me as well -- your surmise is a good one.

As always, it is very nice to hear from you.