A Proper Place, Part Five: "My Room Is A Musty Attic, But Its Little Window Lets In The Stars"

I don't believe that living in a garret leads to wisdom or contentment.  That being said, I do harbor a daydream of living in a monk's cell in San Marco in Florence during the quattrocento.  This daydream is, however, subject to one condition:  I must be assigned to one of the cells which contains a fresco painted by Fra Angelico.  But I'm not picky.

On the other hand, as I have suggested in my "No Escape" series of posts, we are well advised to abandon the notion that an ideal place awaits us somewhere -- a place in which everything will sort itself out.  Alas, I suppose that that applies to my daydream cell in San Marco, doesn't it?

Where does that leave us?  I'm afraid we are fated to dwell in our head and in our heart -- and in the evanescent and indeterminate space which encompasses them both.  What might that space be?  The soul.  Animula. Or, animula vagula blandula.

The soul can find contentment in a small space.  Say an attic room.  With stars. 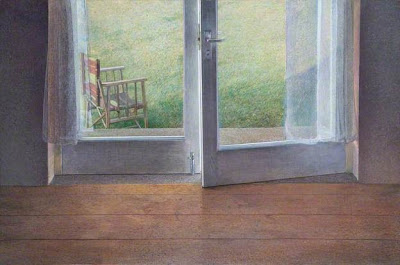 Five holy pictures
Hang on the walls --
The Virgin and Child,
St Anthony of Padua,
St Patrick our own,
Leo XIII
And the Little Flower.

My bed in the centre,
So many things to me --
A dining table,
A writing desk,
A couch,
And a slumber palace.

My room is a musty attic,
But its little window
Lets in the stars.

Patrick Kavanagh, Collected Poems (edited by Antoinette Quinn) (Penguin 2004).  The poem was first published in The Dublin Magazine in 1933. 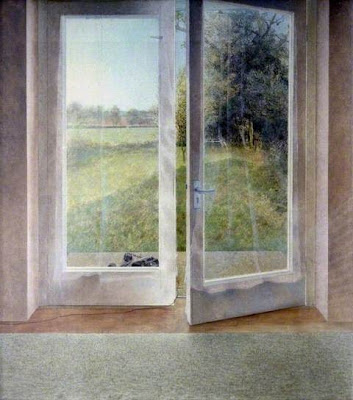 Under the night window
A dockyard fluorescence,
Muse-light on the city --
A world of heightened sense.

At work in your attic
Up here under the roof --
Listen, can you hear me
Turning over a new leaf?

Silent by ticking lamplight
I stare at the blank spaces,
Reflecting the composure
Of patient surfaces --

I who know nothing
Scribbling on the off-chance,
Darkening the white page,
Cultivating my ignorance. 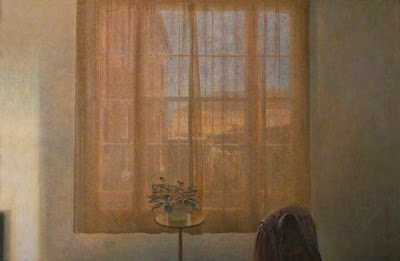 Finally, a poem that has appeared here before, but which is worth revisiting in this context. 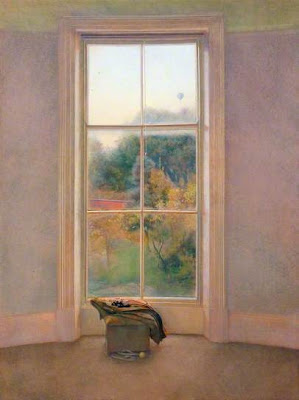 Mr Pentz, whenever I have similar daydreams to those you mention I recall a bedroom I was fortunate enough to have as my own for a period of my childhood; it was in fact an attic room and occupied almost the entire top floor of our house. The house was undergoing a lot of renovation work so I think that was the reason I had such a huge room as my bedroom.Of course my bed, a chest of drawers and the few belongings I had as a child took up very little space, but the room being so large and empty was a wonderful space to play, read and daydream in. It also had two large dormer windows with low windowsills where I could sit and read and watch the world below from my third storey vantage point, so even today when I daydream, this attic or something like it comes often to mind.
I do like the Kavanagh poem.

Mr Ashton: there is something about attic rooms, isn't there? I can see why you would have enjoyed such a room as a child. I have similar memories of an attic bedroom in my grandparents's house, where I spent the night from time-to-time: it always seemed like a different world up there.

As ever, thank you for your thoughts, and for stopping by.

Is it really "slumber palace"? That's good and unexpected. I like that "palace" is simply "place" with added "a." But isn't there an old trope in British culture: "It were only a humble cottage, but it were a palace to us"? It's a lovely word. A huge auditorium in South San Francisco is still called "The Cow Palace" (if it still stands). Were there gin palaces? "The chalice from the palace has the brew that is true." Woody Allen: "It's great to be back at the palace. What do you think of this plague?"

Thanks for the poems, and sorry four the detours.

Mr Miller: well, where do I begin?

First: yes, it is "slumber palace." A very nice thought, too, as one embarks upon an afternoon nap.

As for "gin palace," I'm sure you recall these lines from Elvis's (Costello, that is) "Beyond Belief" (from Imperial Bedroom): "In this almost empty gin palace/Through a two-way looking glass you see your Alice."

Ah, the Cow Palace: scene of memorable rock concerts and home of the Warriors in their heyday. (Did they have a heyday?) I can't believe the authorities would demolish it. Who would have the heart to destroy something with a name like that?

"The chalice from the palace has a brew that's true." I needed the Internet for that! Danny Kaye . . . it's sad, but think how few people nowadays know who he was. Call me sentimental, but that was the Golden Age of Entertainment.

I had forgotten the Woody Allen lines. Another lost world.

Thank you very much for the "detours." No need to apologize: I enjoyed them.