We are surrounded by noise.  My definition of noise is catholic:  the noise of which I speak is both audible and visible.  Any electronic screen is noisy. Thus, for instance, a politician talking on a TV screen with the sound turned off is cacophonous.  And, at the risk of alienating some of you, dear readers, I'm afraid I have to say that electronic books (or whatever they're called) are visibly noisy as well.  To be consistent, I'm perfectly willing to admit that blogs are generators of noise.  (Although some of us hope that our noise is in the service of silence.)

I once read a book about the Renaissance which contained a chapter about how the day-to-day world of that era sounded.  The author included the chapter in order to provide an evocative sense of how vast the difference is between that time and our time.  Think of it.  No planes passing overhead. No cars.  Nobody talking on cell phones.  The most common recurring sound?  Church bells over the rooftops and the fields.

Mind you, I have no immediate plans to repair to a yurt on the Mongolian steppe.  Yes, I am a hypocrite.  I am a consumer and a purveyor of noise. But I prefer silence.

It was a time when wise men
Were not silent, but stifled
By vast noise.  They took refuge
In books that were not read.

Two counsellors had the ear
Of the public.  One cried 'Buy'
Day and night, and the other,
More plausibly, 'Sell your repose.' 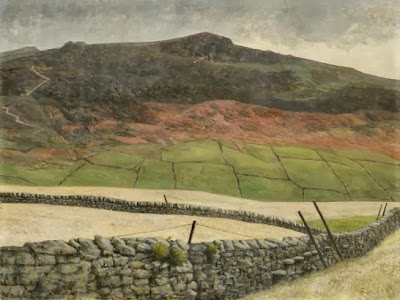 One we know and have known for long,
One we know not, but we shall know,
All we who have ever been born;
Even so, be it so, --
There is silence, despite a song.

Sowing day is a silent day,
Resting night is a silent night;
But whoso reaps the ripened corn
Shall shout in his delight,
While silences vanish away. 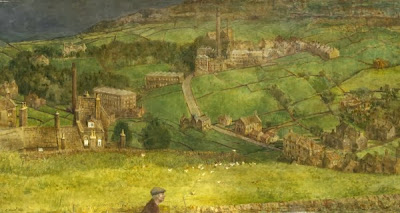 The quietness;
A chestnut leaf sinks
Through the clear water.

This haiku provides a fine example of how lovely a haiku can sound in Japanese.  Here is the Romanized Japanese original:

Shizukasa means "quietness" or "silence."  Wa is a particle that makes "quietness" the subject of the sentence (sort of).  Kuri is "chestnut."  Ha is "leaf."  No is a particle which makes the phrase kuri no ha mean "chestnut leaf."  Shizumu is a verb meaning "to sink."  Shimizu means "clear water." Kana is difficult to translate.  It usually means "I wonder" when used in everyday conversation.  However, when it is used at the end of a haiku, it expresses a sense of reflection combined with wonderment (or so it seems to this amateur):  perhaps something along the lines of "Ahhh . . ."

All of this leads to the following wonderful sequence:  shizukasa . . . shizumu . . . shimizu.  This is the sort of thing that gets "lost in translation." 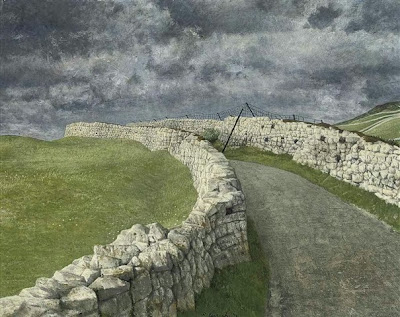 Mr Pentz, I think I am wholly in agreement with you on this subject. I have worked as a librarian for most of my adult life and am old enough to recall the much missed days when libraries operated with rule of silence. Today in most libraries, including the one where I work the noise level is simply dreadful, and even the notion of being quiet lies far outside most people's understanding.
A couple of years back, here in England there was panic about dust from a volcanic eruption possibly affecting flights, so for three days , if I recall correctly all flights were grounded. It was wonderful to be able to hear the silence and the the sounds within it; birdsong, the wind among leaves etc.
Like yourself I have no plans to retire to the Mongolian steppes, but when I have an opportunity to take a holiday more often than not I will seek out a quiet spot deep in the English countryside.Sadly these are becoming more difficult to find.
The haiku translated by R H Blyth is quiet beautiful.
I thought you might be interested in the following article by the English novelist and columnist Susan Hill:
http://standpointmag.co.uk/silence-please-features-june-09-susan-hill

Seneca wrote a short essay "On Noise." It begins, "I cannot for the life of me see that quiet is as necessary to a person who has shut himself to do some studying as it is usually thought to be." He then tells us that he is currently living "right over a public bathhouse." It's noisy down there: massages, ball games, fights, gambling, the constant babble of voices.

His friends tell him he must be made of iron to endure such cacophony, but, Seneca, stoic that we is, says he has the ability to force his mind "to become self-absorbed and not let outside things distract it." He adds that there can be total "bedlam" outside as long as "there is no commotion inside.. . For what is the good of having silence throughout the neighborhood if one's emotions are in turmoil."

He ends his essay, though, by saying he is planning to move from his digs above the bathhouse. He says he only moved there "to test himself."

The last sentence of the essay seems to contradict all that has come before it: "Why should I need to suffer the torture any longer than I want when Ulysses found so easy a remedy for his companions even against the sirens." Yes, it just seems simpler to move, eh.

I would not presume to suggest that Seneca is playing the role of super stoic a bit histrionically in his essay, and it's true, no doubt, that if one has no choice but to live and work in the midst of a frightful din, one is best served by a stoic disposition, but it seems almost axiomatic to me than any person of a contemplative temperament would prefer quiet to racket.

No doubt I am what Seneca calls the man of "unstable temperament," one "that starts at the sound of a voice or chance noises." Such a man, Seneca says, "is an unstable one and one that has yet to attain inward detachment."

As I write this the neighbor's dog is barking, and, sad to say--since I lack inner resources--the yapping annoys the hell out of me.

Mr Ashton: as always, thank you for your thoughts.

Yes, public libraries over here often resemble Bedlam these days, I'm afraid. Your mentioning of the silence when the planes were grounded due to the Iceland volcano immediately reminded me of a sadder instance: the silence of our skies after the 9/11 attacks. Given the circumstances, the silence was sad and eerie. Under other circumstances, it would have been welcome.

I like your idea of retreating to a quiet spot in the countryside. I am reminded of George Gissing's The Private Papers of Henry Ryecroft, which i have been reading: it has a few apostrophes to the wonders of peace and quiet in the English countryside.

Thank you very much for the link to the article by Susan Hill: it is very good. I like the fact that she mentions Patrick Leigh Fermor's A Time for Silence, as well as the movie Into Great Silence: I had come across a reference to it some time ago, and made a mental note to watch it, but it slipped my mind. I will have to track it down. And thank you for reminding me of Standpoint: I used to visit that site quite often, but I have fallen out of the habit.

I'm glad that you liked the Basho haiku. Haiku have a way of inducing quietness and calm (at least for me), particularly those by Basho. Blyth rightly speaks of him as the Shakespeare of Japanese literature. (Or perhaps, to be fair, we should say that Shakespeare is the Basho of English literature!)

Mr Floyd: thank you very much for the thoughts from Seneca. I readily confess that I am not in Seneca's league when it comes either to Stoicism or to creating a cone of silence -- although his ability is something to be admired (unless, as you suggest, he is pulling our leg a bit). But, as a matter of fact, I suppose that humans have steadily gotten used to a higher and higher level of background noise over the ages. Unfortunately. Which is why our ears ring when we find ourselves in a place that is truly silent.

It is always good to hear from you. Thanks for visiting.

I thoroughly enjoyed all of these pieces, specifically the haiku. I do not understand the reasoning, but as I get older I seem to become more aware and annoyed of the noises and distractions around me. I recently read an essay by Arthur Schopenhauer titled, "On Noise." He proses many interesting thoughts on the subject which made this read more interesting. The haiku gave a calming effect at the end of everything. I was able to take a step back from the constant noise and buzz from society.

Mr Pentz, just a follow up comment. I hope you don't mind.
I'm pleased you enjoyed the Susan Hill piece, it is very good isn't it.
I spent many years working in public libraries and now work in a university library in which both behaviour and noise level are even worse than in public libaries.
I recently listened to a review on BBC Radio 4 of the following film which sounded as if it might be of interest. It is due for DVD release at the end of October. I include a link to the film's website for information;
http://www.silencefilm.ie/
Re-reading the Susan Hill article remeinded me that I too had meant to watch The great silence .I must do so now.
Gissing's Henry Ryecroft is perennial favourite of mine.
As always it is good to hear back from you.

Mr. Pentz: thank you very much for stopping by, and for your comments.

And thank you for reminding me of Schopenhauer's "On Noise," which is wonderful. People tend to think of him as a pessimist and a curmudgeon, but he often makes me laugh out loud. I sometimes think that he wrote essays like "On Noise" to deliberately provoke people and to pull our leg a bit. (Although I'm sure that he always believed every word he wrote.)

I'm pleased that you like the haiku. As I said in my earlier response to Mr Ashton's comment, haiku (especially Basho's) have a knack for bringing about silence and calmness.

Mr Ashton: thank you for the follow-up comments.

I would have thought that university libraries would be quieter. Shows what I know.

Thank you for the information about Silence. The trailer/excerpts are very nice. I hope that it will be available over here as well, since I would love to see it.

Thanks again. It's always a pleasure to hear from you.

Stephen I feel as if I've been chasing quietness my whole life. I've even moved here to this hamlet by the sea because the main sounds are seals barking, frogs pleasantly caterwalling in the wet season, wind creaking the pine boughs and waves sometimes smashing onshore. All bigger than me sounds and even more thrilling in winter. Now after trips to the city I come back home as if its Mecca, nearly weak kneed with the chaos and beeping of the large city I've just left behind me. I feel as if I've risked my sanity to see an art exhibition and dine on decent sushi. I'm just relieved to know I'm not the only one!
Julie

Julie: as always, it's nice to hear your thoughts. Having seen the photos of your environs posted on your blog, I can imagine the quietness -- you are fortunate. And it must indeed seem a paradise upon returning from the city.