Blackbirds: In Memory Of Seamus Heaney

Sometimes the fact that a certain person is simply there in the world -- as a presence, an example, an inspiration -- is a matter of great significance. We often take their presence for granted.  And then they are gone.

But Seamus Heaney will never be gone from the world, will he?

One morning in the month of June
I was coming out of this door
And found myself in a garden,
A sanctuary of light and air
Transplanted from the Hesperides,
No sound of machinery anywhere,
When from a bramble bush a hidden
Blackbird suddenly gave tongue,
Its diffident, resilient song
Breaking the silence of the seas. 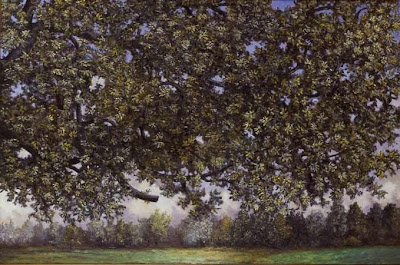 And we are kindred when
The hill wind shakes
Sweet song like blossoms on
The calm green lakes.

We dream while Earth's sad children
Go slowly by
Pleading for our conversion
With the Most High.

Patrick Kavanagh, Ploughman and Other Poems (1936). 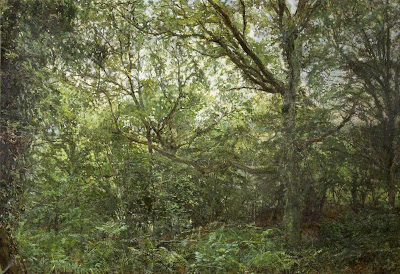 The Bangor Blackbird
from the Old Irish (9th century),
anonymous

Just audible over the waves
a blackbird among leaves
whistling to the bleak
lough from her whin beak.

The poem translated by Mahon in "The Bangor Blackbird" was also translated by John Hewitt in the first stanza of his "Gloss, on the Difficulties of Translation" (which I have previously posted):

Across Loch Laig
the yellow-billed blackbird
whistles from the blossomed whin. 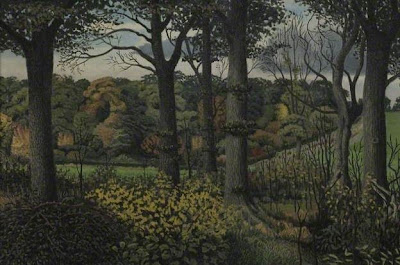 When you have nothing more to say, just drive
For a day all round the peninsula.
The sky is tall as over a runway,
The land without marks, so you will not arrive

But pass through, though always skirting landfall.
At dusk, horizons drink down sea and hill,
The ploughed field swallows the whitewashed gable
And you're in the dark again.  Now recall

The glazed foreshore and silhouetted log,
That rock where breakers shredded into rags,
The leggy birds stilted on their own legs,
Islands riding themselves out into the fog,

And drive back home, still with nothing to say
Except that now you will uncode all landscapes
By this:  things founded clean on their own shapes,
Water and ground in their extremity.

Seamus Heaney, Door into the Dark (Faber and Faber 1969). 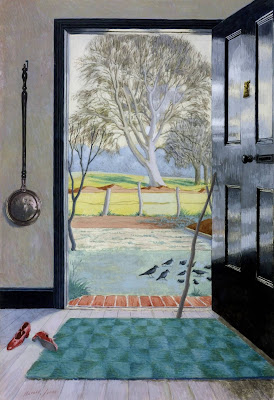 It seems that for some reason a lot of us felt as though we knew Seamus Heaney personally, even if we didn't...so I can only imagine how his friends and family feel now. I was fortunate to go to his readings a few times in the last few years and from those, and all I've heard, he seemed a lovely man as well as one of the great poets of our time, so that has something to do with it, I suppose. I was terribly sad when I heard the news and still feel sad. We still have the wonderful poetry, though.

Yes, Heaney was special, as a poet and as a man.

The two “Bangor Blackbird” poems seem very different, both are are enjoyable (Thanks for the link to “Gloss” - I now understand why the Whinchat is so named)

Yes Mr Pentz, sad news indeed. I have to admit to not having read any of Heaney's poetry for a while now, but when I heard the news of his death certain poems and lines, particularly from his earlier volumes came back to mind and over the weekend I've been dipping back into Death of a naturalist,Door into the dark and Wintering Out.

The Patrick Kavanagh piece I did'nt know at all; The blackbird, a favourite Mahon poem and I very much like the John Hewitt translation.
I'm sure you are familiar with the following ,it's one of my favoutite Heaney poems and I thought I'd share.

Late August, given heavy rain and sun For a full week, the blackberries would ripen. At first, just one, a glossy purple clot Among others, red, green, hard as a knot. You ate that first one and its flesh was sweet Like thickened wine: summer's blood was in it Leaving stains upon the tongue and lust for Picking. Then red ones inked up and that hunger Sent us out with milk cans, pea tins, jam-pots Where briars scratched and wet grass bleached our boots. Round hayfields, cornfields and potato-drills We trekked and picked until the cans were full, Until the tinkling bottom had been covered With green ones, and on top big dark blobs burned Like a plate of eyes. Our hands were peppered With thorn pricks, our palms sticky as Bluebeard's. We hoarded the fresh berries in the byre. But when the bath was filled we found a fur, A rat-grey fungus, glutting on our cache. The juice was stinking too. Once off the bush The fruit fermented, the sweet flesh would turn sour. I always felt like crying. It wasn't fair That all the lovely canfuls smelt of rot. Each year I hoped they'd keep, knew they would not.

Thanks for sharing these.

Ms. Aykroyd: thank you for visiting again, and for your thoughts. From the brief time that I saw Mr Heaney and his wife Marie at a book-signing, they both seemed like lovely people. He will be missed.

Mr Plant: It's very nice to hear from you again -- thank you for stopping by.

The history of that short poem is an interesting one. I'm not certain if it can be found on the Internet, but there is an article about the origins of the poem and the numerous translations of it titled "Certain Ways of Looking at a Blackbird" (a nod to Wallace Stevens) by David Burleigh in the Journal of Irish Studies, Volume 23 (2008).

Thanks again. I always appreciate hearing from you.

Mr Ashton: I have been doing the same thing myself. Like you, I tend to be drawn more to his earlier volumes. And thank you for "Blackberry Picking": it is one of my favorites by him.

I'm pleased that you like the Kavanagh and Hewitt poems. As I noted above in my response to Mr Plant's comment, there is an interesting article out there on the history of that old Irish poem.

Mr Fredua-Agyeman: you're welcome. I'm pleased that you enjoyed the poems. Thank you very much for stopping by -- it's good to hear from you again.

She's not for everybody of course but. just to note the fact, Dickinson associated blackbirds and their song with summer:

It can't be "Summer"!
That—got through!
It's early—yet—for "Spring"!
There's that long town of White—to cross—
Before the Blackbirds sing!
It can't be "Dying"!
It's too Rouge—
The Dead shall go in White—
So Sunset shuts my question down
With Cuffs of Chrysolite

Thank you Mr Pentz - and your correspondents, too. It is a long time since I have been so aware, as I have been this week, of such a real sense of a community of felt loss. It is something to do with the rootedness of his poems, with which so many can empathise, the sense of his artistic integrity, his lovely (written and spoken) voice and the sense of his deep decency. I have to say that I agree with the somewhat iconoclasic opinion voiced in one of the newspaper letters columns this week, that he was as great, or greater than Yeats. (Poetry is not a competition, of course...). The following poem of his I did not know, but came across as the news broke and it seems to me so apposite.:

All day the clunk of a baler
Ongoing, cardiac-dull,
So taken for granted

It was evening before I came to
To what I was hearing
And missing: summer's richest hours

As they had been to begin with,
Fork-lifted, sweated-through
And nearly rewarded enough

By the giddied-up race of a tractor
At the end of the day
Last-lapping a hayfield.

Was Derek Hill's saying,
The last time he sat at our table,
He could bear no longer to watch

The sun going down
And asking please to be put
With his back to the window.

Anonymous: thank you very much for the Dickinson poem. She always provides an interesting -- and thought-provoking -- angle on things, doesn't she? I like "that long town of White": very nice.

Mr Trotman: thank you very much for your thoughts on Seamus Heaney. And thank you as well for "The Baler," which I hadn't seen before: a lovely poem.

I always appreciate hearing from you. Thanks for visiting again.

The spirit of this great poet will never die, he left us his soul in his words. I have never come across the peninsula poem before, my favourite was Mid-Term Break. It breaks my heart every time I read it.

Heaney's death (much to my suprise) hit me hard -- similar to a time when I was driving and heard on the radio that Arthur Miller had died. I had to pull over; not sure where that sort of reaction comes from... You're right: just knowing "the greats" are walking around somewhere is comforting; but they have gone a long way to acheive immortality... Thanks for these great selections, Stephen.

acornmoon: that is a lovely way of putting it. I agree with you about "Mid-Term Break." And now the two brothers lie beside each other in Bellaghy.

Chris: thank you very much for the thoughts. I was shocked as well, and, like you, I'm not certain where that reaction comes from. Of course, it has something to do with the fact that people such as Heaney have, through their art, aroused emotions and provoked thought in us, which creates some sort of human connection that goes beyond surprise at the death of "a famous person."

Like you, I've experienced similar feelings at the deaths of writers and musicians who have meant a great deal to me, even though I have no "real life" connection with them.

As always, it is good to hear from you. I hope that all is well. Thanks again.