September has a high wistfulness quotient.  Summer is hanging on, but your emotions tell you otherwise.  Things seem vaguely unsettling -- like having one foot in the rowboat and one foot on the dock.  "Now it is September and the web is woven. /The web is woven and you have to wear it."  So writes Wallace Stevens in "The Dwarf."

For instance:  this week could have passed for high summer.  Then, as I turned a corner on a sunny afternoon walk, I saw in the distance a row of trees whose upper leaves had turned red and orange and yellow.  The bright boughs swayed against the sky-blue sky. 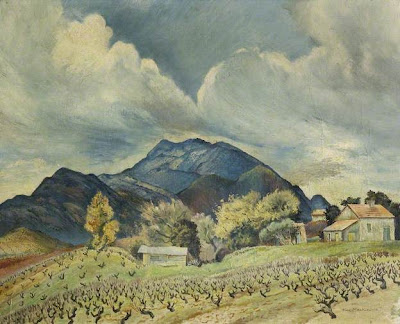 She walketh like a ghost,
Lovely and gray
And faint, faint, faint . . .
Ere Autumn's host
Of colours gay
Breaks on the year, September
Comes sighing her soft plaint,
'Remember!'

Remember what?  All fair
Warm loves now wan:
All fleet, fleet, fleet
Flowers in the hair
Of Summers gone!
Though fruit break rosy, of these
Are her most sweet
Sad memories.

Most faint and tender
Music awaketh,
Sighing, sighing, sighing,
A voice to lend her.
Surely it breaketh
Even Death's heart, as he goes
To gather in Summer's long-dying
Last rose.

So drifting like a ghost,
Lovely with dream
And faint, faint, faint,
Sighing 'remember,' almost
September did seem
My gray soul's image, as she
Whispered over that plaint
So musically! 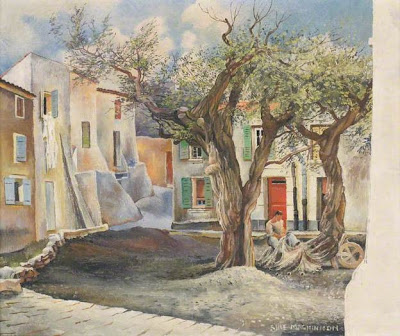 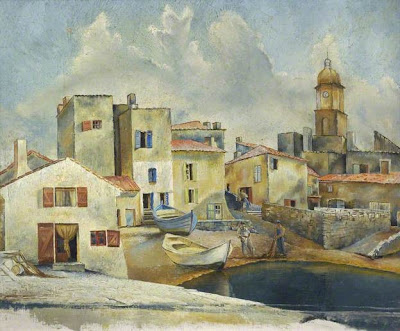 Sine MacKinnon, "The Old Houses of the Fishing Village"
Posted by Stephen Pentz at 12:30 AM

We might note that Keats composed his ode "To Autumn" on September 19, 1819, the poem a serene contemplation of ripeness at its peak, the moment of replete fruition, a moment the poet does not lament but rather soaks up. Compare Keats's ". . .gathering swallows twitter in the sky" with Stevens's ". . . casual flocks of pigeons make / Ambiguous undulations as they sink, / Downward to darkness of extended wings."

"To Autumn" and "Sunday Morning" reveal moments of extreme aesthetic beauty and understanding of the unique sensibility of a self-conscious creature: "Death is the mother of beauty."

Emily Dickinson sees September as a pivotal month, a time of transition, a time that impels us to ponder what is fast fading and that which is fast approaching. As your posting exemplifies: September
, a sudden breeze, the unspooling of a fugitive leaf, the darkness coming sooner now, makes the heart turn philosopher.

That hints without assuming --
An Innuendo sear
That makes the Heart put up its Fun
And turn Philosopher.

Anonymous: thank you very much for all of the wonderful associations. The combination of Keats and Stevens is a good one. Keats's presence seems clear in Stevens's "Autumn Refrain": "The yellow moon of words about the nightingale/In measureless measures."

The Dickinson poem is lovely. I particularly like: "And a dissembling Breeze/That hints without assuming." I suppose that she may be thinking of that hint of chill beneath the surface of a late summer breeze. "That makes the Heart put up its Fun/And turn Philosopher" hits the nail on the head when it comes to autumn, doesn't it?