Is the moon different in autumn?  I have no hard evidence, only inklings.  I am one of those who is lucky enough to have fond childhood memories of the sight and smell of piles of raked-up burning leaves.  Am I deceiving myself, or did a large yellow-orange waxing moon rise each year through the bare branches of the oaks and elms as the leaves smoldered up and down the block?  In 1964, for instance, the moon reached its first quarter on October 13 and was full on October 21.  The time frame fits.  Might this be a tantalizing clue?  Perhaps I am not imagining things. 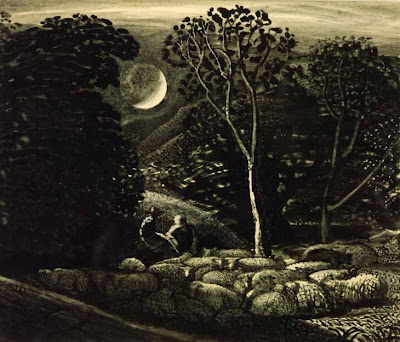 A touch of cold in the Autumn night --
I walked abroad,
And saw the ruddy moon lean over a hedge
Like a red-faced farmer.
I did not stop to speak, but nodded,
And round about were the wistful stars
With white faces like town children.

As I have suggested before, wistfulness is an (the?) essential component of autumn.  Thus, "the wistful stars" (line 6) seems right.

Hulme wrote only a handful of poems (40 or so, by my count).  He is best known for the influence of his aesthetic and philosophic thoughts and writings on budding "modernists" such as T. S. Eliot and Ezra Pound.  On September 28, 1917, he was killed in Flanders by the blast from an artillery shell.  He was 34. 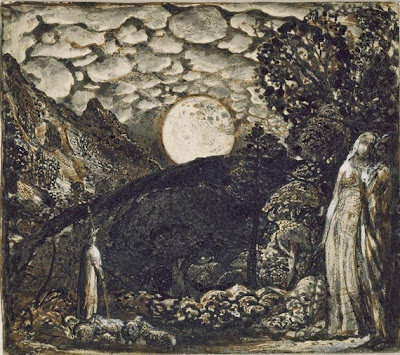 There is such loneliness in that gold.
The moon of the nights is not the moon
Whom the first Adam saw.  The long centuries
Of human vigil have filled her
With ancient lament.  Look at her.  She is your mirror. 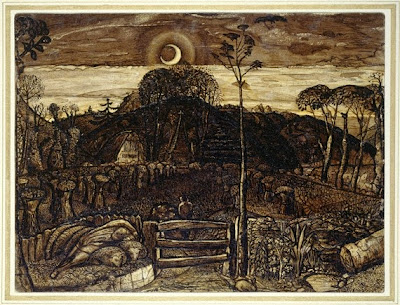 As is often the case, Japanese and Chinese poets have a way of perfectly summing things up in a matter-of-fact and direct fashion.  But, as always, the calm surface covers deep depths.

The form of the poem is a tanka (often referred to nowadays as a waka), which consists of five phrases (usually rendered into separate lines in English translations), with a syllable count per line of 5-7-5-7-7. 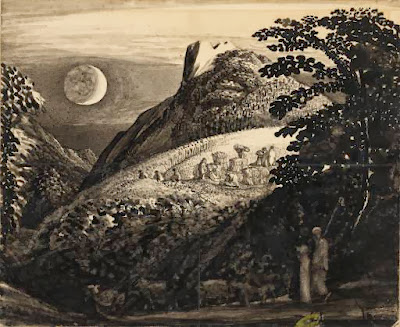 Those of us who admire the poetry of W. H. Auden consider his poem "Lunar Beauty" one of his most lovely and moving poems.

This lunar beauty
Has no history
Is complete and early,
If beauty later
Bear any feature
It had a lover
And is another.

This like a dream
Keeps other time
And daytime is
The loss of this,
For time is inches
And the heart's changes
Where ghost has haunted
Lost and wanted.

But this was never
A ghost's endeavor
Nor finished this,
Was ghost at ease,
And till it pass
Love shall not near
The sweetness here
Nor sorrow take
His endless look.

Anonymous: thank you very much for the poem. Early Auden is sometimes hard for me to puzzle out, but I don't let that bother me, since the sound is so wonderful. And this poem goes well with the autumn moon theme.

Thank you for this beautiful blog. I am just a random person from the internet. My little boy drew a picture that reminded me of Samuel Palmer and I googled an image that brought me to this sudden treasure. What a gift your sensibility is.

Morgan Hunt: Thank you very much for your kind words. Palmer's paintings are indeed wonderful, aren't they?

I'm pleased that you found your way here. It's funny how these things happen. I hope you will return. Thank you again.