The Sky Of Autumn

Autumn sometimes provokes in me an urge to simplify, to pare things down.  Perhaps this is due to the sense of impending loss.  But "impending loss" sounds too dire:  this is, after all, my favorite season, and I always welcome its arrival.  Yet loss is at the heart of autumn's beauty, isn't it? 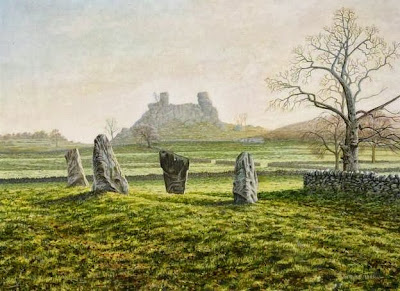 In the interest of paring things down, consider the following haiku by Buson (1716-1783):

I go;
Thou stayest:
Two autumns.

Blyth's translation of the second phrase of the haiku is a bit formal and archaic.  (Not that I am opposed in principle to archaisms, mind you -- I generally welcome them.)  Another way of putting it (even sparer) might be:

I go;
You stay:
Two autumns.

Buson is speaking of autumn, but he is speaking of much more, of course. But we need not "explain" what he is getting at:  when it comes to haiku (and all poetry), one needs to learn to keep one's mouth shut. 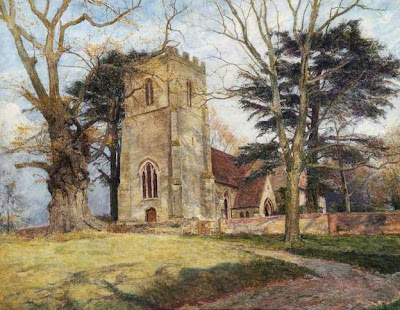 A flower unknown
To bird and butterfly, --
The sky of autumn.

As I have noted before, Blyth's four-volume Haiku is the place to start in order to learn about haiku.  As I have also noted, one of the wonderful things about Blyth is that he is as knowledgeable about English literature as he is about Japanese literature.  Thus, after his translation of the above haiku, he quotes (without comment) a sentence by Richard Jefferies:

"The rich blue of the unattainable flower of the sky drew my soul towards it, and there it rested, for pure colour is rest of heart."

Very nice, isn't it? -- a Japanese poet of the 17th century and an English writer of the 19th century separately arriving at the same thought half a world away and two hundred years apart. 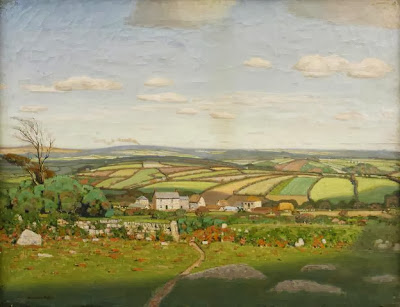 Mr Pentz, in my own effort to pare down. The haiku of Basho, the words of Richard Jefferies, quite simply, beautiful.

I remember autumns long ago, golden Octobers piled like quilts on the imagination, though I look now in dark retrospect. I, in the second or third grade, am riding my bike home from school, and when I turn the corner of my street, I see my mother, not yet thirty years old, raking the sere and red and yellow leaves into piles, which she and I will then move onto a large spread and move them to the side of the street. When the yard is thoroughly raked of leaves, the task done, a dome of leaves stacked on the edge of the yard, my mother will put a match to the leaves and, in a moment or two, the white fingers of the smoke reach into the cloud-scoured sky, the rich acrid yet sweet odor of combustion indissolvably chiseling itself into the corridors of memory.

One cannot burn leaves any more: city ordinances ban such activity. Yet still every autumn the leaves change color and fall to the ground and then, after the winter comes, the spring arrives, and time sees to it that autumn comes once again, as fresh and glorious as all those that have come before.

But what of the seasons of a man's life, a clichéd image to be sure, this difference between the sensibility of an aging man and that of fresh-cheeked boy and his young, lovely mother.

Here's the first part of Laurence Binyon's poem "The Burning of the Leaves":

I
Now is the time for the burning of the leaves.
They go to the fire; the nostril pricks with smoke
Wandering slowly into a weeping mist.
Brittle and blotched, ragged and rotten sheaves!
A flame seizes the smouldering ruin and bites
On stubborn stalks that crackle as they resist.

The last hollyhock's fallen tower is dust;
All the spices of June are a bitter reek,
All the extravagant riches spent and mean.
All burns! The reddest rose is a ghost;
Sparks whirl up, to expire in the mist: the wild
Fingers of fire are making corruption clean.

Now is the time for stripping the spirit bare,
Time for the burning of days ended and done,
Idle solace of things that have gone before:
Rootless hope and fruitless desire are there;
Let them go to the fire, with never a look behind.
The world that was ours is a world that is ours no more.

They will come again, the leaf and the flower, to arise
From squalor of rottenness into the old splendor,
And magical scents to a wondering memory bring;
The same glory, to shine upon different eyes.
Earth cares for her own ruins, naught for ours.
Nothing is certain, only the certain spring.

Mr Ashton: I'm pleased that you like the Basho and the Jefferies -- for which we have R. H. Blyth to thank. I highly recommend having a look at his Haiku volumes, since he often comes up with these splendid correspondences between Japanese and English literature. A few months ago, I came across a wonderful comparison he made between Basho and Hardy, which I hope to use in a post one of these days.

As always, It's a pleasure to hear from you.

Anonymous: thank you very much for your thoughts on autumn. My childhood memories of autumn are full of the scent of burning leaves as well. I suppose that some will say that the burning bans are "progress," but I think not. (I suppose that makes me not sufficiently "green"! Oh well.)

And thank you for the excerpt from Binyon's poem: I try to visit it each autumn.

I visit often. I love this post on Haiku and I'm adding this bit of spit to the stream—short form times four. Thanks for the fine artwork, too!

A gold and black lump
dropped in a heap by the blasé sultana,
a levantine tapestry abandoned
by a female mallard.
Sargent skunk strewn purple
in the left lane as I
slide through the last embers
of his burning leaves.
A three spike buck
with two vultures riding tandem,
twin surfers hanging ten
on the colossal tsunami of Shiva
dancing in the burning wheel of the sky.
The raccoon's one paw lightly
lifted in stop motion.
Salutations from the shining pool
at the end of time.
Everyone is so restless in Autumn.

Mr. Lang: thank you very much for the poem. Yes, there is restlessness as well as wistfulness in Autumn, isn't there? Your poem reminds me of past drives along the California coast.

I appreciate hearing from you again. Thank you for stopping by.