"He saw a ghost in Stinsford Churchyard on Christmas Eve, and his sister Kate says it must have been their grandfather upon whose grave T. H. had just placed a sprig of holly -- the first time he had ever done so.  The ghost said:  'A green Christmas' -- T. H. replied 'I like a green Christmas.'  Then the ghost went into the church, and, being full of curiosity, T. followed, to see who this strange man in 18th century dress might be -- and found -- no-one.  That is quite true -- a real Christmas ghost story."

How like Hardy!  Rather than being frightened out of his wits, he matter-of-factly converses with the spirit as if it was nothing out of the ordinary, blithely responding:  "I like a green Christmas."  Wonderful.  Just like one of his poems. 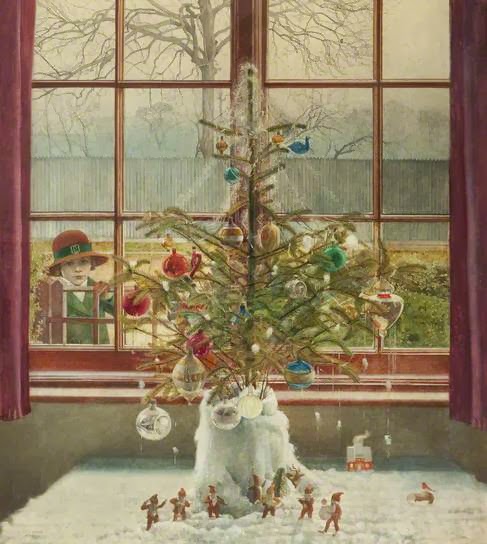 The fact that Hardy's ghost conversation took place on Christmas Eve fits well with his Christmas poems, which often have a foggy, gloomy setting, and which are usually marked by the presence of wraiths or wraith-like humans.  This is true of the following two poems, and yet the poems have an oddly cheerful feeling to them -- proving that Hardy is no Scrooge.

A Nightmare, and the Next Thing

On this decline of Christmas Day
The empty street is fogged and blurred:
The house-fronts all seem backwise turned
As if the outer world were spurned:
Voices and songs within are heard,
Whence red rays gleam when fires are stirred,
Upon this nightmare Christmas Day.

The lamps, just lit, begin to outloom
Like dandelion-globes in the gloom;
The stonework, shop-signs, doors, look bald;
Curious crude details seem installed,
And show themselves in their degrees
As they were personalities
Never discerned when the street was bustling
With vehicles, and farmers hustling.

Three clammy casuals wend their way
To the Union House.  I hear one say:
"Jimmy, this is a treat!  Hay-hay!"

Six laughing mouths, six rows of teeth,
Six radiant pairs of eyes, beneath
Six yellow hats, looking out at the back
Of a waggonette on its slowed-down track
Up the steep street to some gay dance,
Suddenly interrupt my glance.

They do not see a gray nightmare
Astride the day, or anywhere.

Thomas Hardy, Winter Words in Various Moods and Metres (1928).  A "casual" was either an occasional laborer with no fixed employment or someone who was in need of temporary charitable relief.  The "Union House" was the workhouse in Dorchester, Dorset.

The poem, with its empty, foggy street and its lamps "like dandelion-globes in the gloom" (a lovely description), has a Dickensian "nightmare" feel to it.   But Hardy never states exactly what the "nightmare" is. 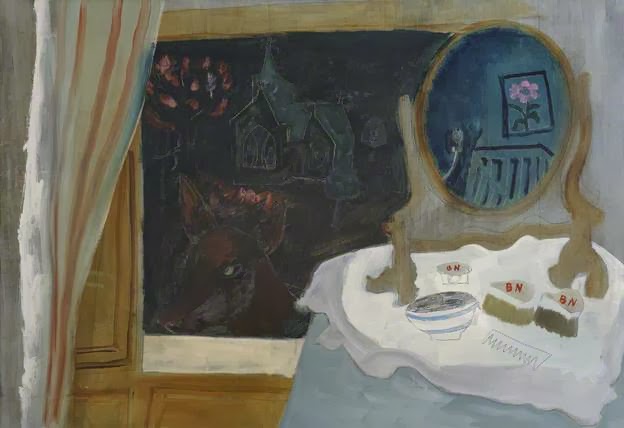 The following poem is a variation on the same theme.

Thomas Hardy, Ibid.  The "Casuals' gate" was one of the entryways to the Union House mentioned above.

Which in turn leads me to say to all of you whose visits here throughout the year are much-appreciated:  "A merry Christmas, friend!" 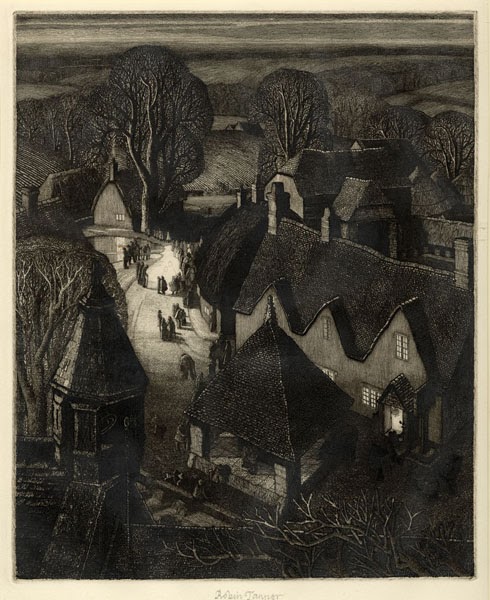 Although I've not commented lately, I've been reading and enjoying the blog thoroughly, Stephen. Merry Christmas to you and yours!

I am glad to report, we are not quite in the Workhouse here yet . . . What a terrifying prospect it was to my ag. lab. ancestors though. I guess it was the difference between being a "Casual" and having some choice, and not.

I am reading a novel about Thomas Hardys wife Florence at present, so feel very tuned in to his world. How accepting Hardy seemed of that ghost - and to follow the spectre of his grandfather into the little church at Stinsford.

Beautiful poems both. I know Dorchester very well, as I used to work there, so have a strong visualization of his words.

A Merry Christmas to you, and thanking you for causing me to read more poetry and try and understand Edward Thomas's in much greater depth.

Jeff: thank you very much. I appreciate your taking the time to stop by. Merry Christmas to you as well! I wish you many happy gargoyles in the coming year!

Bovey Belle: yes, Hardy's reaction to the ghost was perfectly in character, wasn't it?

You are probably aware of this: in an interview that was published in 1904, TH said: "I seriously assure you that I would give ten years of my life -- well, perhaps that offer is rather beyond my means -- but when I was a younger man, I would cheerfully have given ten years of my life to see a ghost -- an authentic, indubitable spectre." (William Archer, Real Conversations, page 37.) So perhaps he got his wish.

Thank you very much for your visits and thoughts throughout the year. They are much appreciated. As for causing you to look into ET further: thank you for saying so, but you are way ahead of me on that. Especially since you have trod in his footsteps!

And a Merry Christmas to you, someone I think of as an Internet Friend. And a New Year full of much more Hardy, ET, fascinating pictures -- all things that will make any year better.
Susan

Susan: Merry Christmas and Happy New Year to you as well! I am grateful for your long-time presence here -- your comments always get me to thinking about things I hadn't thought of when I drafted the post. I too think of you as an "Internet Friend."

I look forward to sharing more poetry and art together in the coming year.

Thankyou for the ghost wish of Hardy - if I ever read it, it did not remain in the literary library of my brain! I'm glad he got his wish and still lived to a ripe old age.

As for ET - I know about the person, but still have large L plates up for divining the true meaning of his poetry, but thank you for the compliment anyway!

As sometimes happens here, I found myself reading the Hardy poems at least three times, finding something fresh each time I did. The paintings are as always perfection. A Merry Christmas and Happy New Year Stephen! Hope to discover many new works here in the new year.
Best
Julie

Bovey Belle: yes, I think its wonderful that TH may have gotten his wish -- although, as you and I both know, it seems like he was continually communicating with the dead by his immersion in the past, whether or not there were any ghosts at hand.

Julie: Merry Christmas and Happy New Year to you as well! I look forward to hearing from you in the coming year.