Once, long ago, I drove through the rolling fields of the Virginia countryside at dusk in autumn, searching for the site of a somewhat obscure Civil War cavalry skirmish.  In those days, GPS navigation systems did not exist, so my only guide was one of those devilishly-folded state road maps that used to be available free-of-charge at gas stations.  (When I was young, my grandparents called them "service stations."  Ah, another lost world!)  However, the map was of no use since it only went as far as numbered county roads, and I was beyond them.

The sun had begun to set, and I was about to call it a day, when I came upon a crossroads in the middle of empty pastures and harvested cornfields.  Utility poles and their drooping lines headed off in all four directions.  There were no buildings.  But there was, unaccountably, a telephone booth in one corner of the intersection, attached to a utility pole by a cable.  (Yet another lost world.)

A signpost stood beside the road near the telephone booth.  Wondrously, one of the signpost's arms -- pointing east into the coming dark -- contained the name I was looking for: "Yellow Tavern."

I was so taken by the scene that I decided to call my then-girlfriend (who was three time zones away) in order to tell her that I was standing in the middle of the Virginia countryside at sunset calling her from a lonely telephone booth and that I had just discovered the way to Yellow Tavern. She was not impressed.  Perhaps this was due to the fact that I had called her collect to deliver this momentous news.

I'm afraid that I cannot concoct a moral to this story, other than this:  even in this day and age, we should be on the lookout for signposts.  You never know when one might turn up. 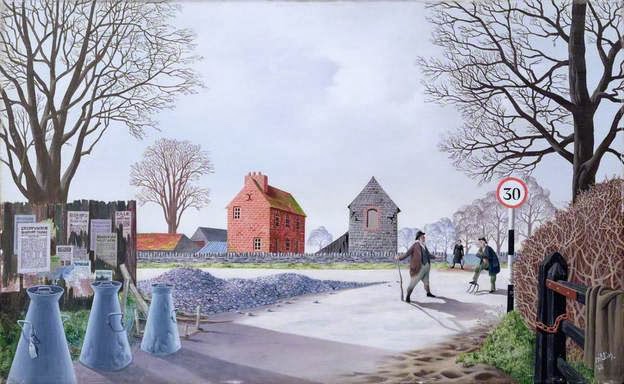 The dim sea glints chill.  The white sun is shy,
And the skeleton weeds and the never-dry,
Rough, long grasses keep white with frost
At the hilltop by the finger-post;
The smoke of the traveller's-joy is puffed
Over hawthorn berry and hazel tuft.

I read the sign.  Which way shall I go?
A voice says:  You would not have doubted so
At twenty.  Another voice gentle with scorn
Says:  At twenty you wished you had never been born.

One hazel lost a leaf of gold
From a tuft at the tip, when the first voice told
The other he wished to know what 'twould be
To be sixty by this same post.  'You shall see,'
He laughed -- and I had to join his laughter --
'You shall see; but either before or after,
Whatever happens, it must befall,
A mouthful of earth to remedy all
Regrets and wishes shall freely be given;
And if there be a flaw in that heaven
'Twill be freedom to wish, and your wish may be
To be here or anywhere talking to me,
No matter what the weather, on earth,
At any age between death and birth, --
To see what day or night can be,
The sun and the frost, the land and the sea,
Summer, Autumn, Winter, Spring, --
With a poor man of any sort, down to a king,
Standing upright out in the air
Wondering where he shall journey, O where?' 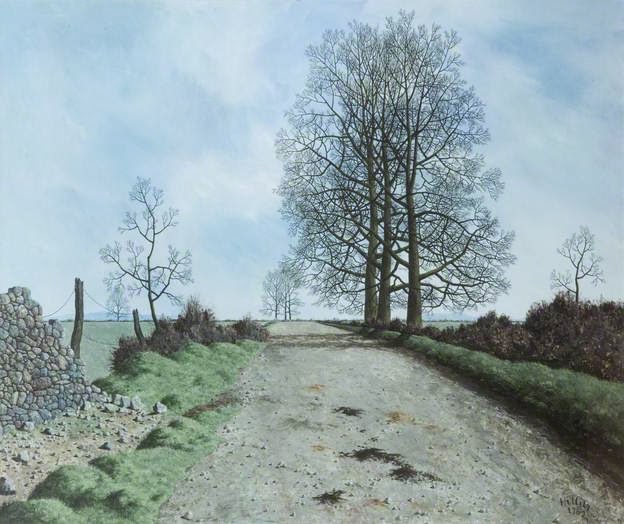 Well, well, there is quite a bit to consider in that poem, isn't there? Although Thomas's character is strongly present in nearly every poem he wrote, I believe that "The Signpost" may be the one that captures him best. To use Philip Larkin's phrase (which I have quoted before):  "the poetry of almost infinitely-qualified states of mind."  And we mustn't forget the anecdote that Robert Frost's "The Road Not Taken" may have been prompted by Thomas's tendency to hesitate or second-guess in choosing between forks in the road when he and Frost went out on walks together in England.

In addition, there is the heartbreaking irony in ". . . the first voice told/The other he wished to know what 'twould  be/To be sixty by this same post." We know in sad retrospect that that possibility ended at Arras in April of 1917.  But perhaps it doesn't matter:  ". . . but either before or after,/Whatever happens, it must befall,/A mouthful of earth to remedy all/Regrets and wishes shall freely be given."  (Those lines could just as well have been written by Thomas Hardy, don't you think?)

Finally, there is the astounding technical accomplishment:  fifteen rhyming couplets that sound like everyday conversation.  This is exactly what Thomas and Frost were after.  Who knows what 20th century English and American poetry would have been like had Thomas lived, and had he continued as "the only brother" Frost "ever had"? 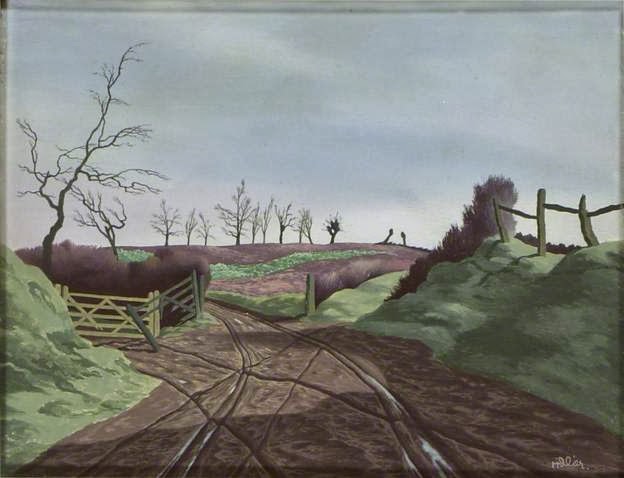 The selections (a favorite poem and lovely pictures) today made me stop and comment. Thank you again for your thoughtful and inspiring efforts. Through a difficult couple of years (now better), stopping here regularly has helped keep me going, and kept me going back to my bookshelf for more. I look forward to sharing the poetry and paintings with you and the rest of the audience over the coming year. Merry Christmas and Happy New Year.

Mr Pentz - I loved your tale of hunting for site of the Civil War skirmish at Yellow Tavern and was glad you finally found it!

I have those first lines of The Signpost at the side of my blog, and they are the first thing my eyes fall on when I visit it each morning. They never fail to astound me with their capturing of the English landscape - the ramping Traveller's Joy like smoke. The syntax seems to capture a moment of pure inspiration.

"The hilltop by the finger post" reminds me of Hardy - it is a very Hardyesque thing to say - and calls to mind the Cross-in-Hand where Alec makes Tess swear that she will never tempt him.

But I digress - it is the dialogue set up within this poem which, as you rightly say, gives us the biggest insight into Thomas's character. How he despised himself at 20 - and I think unless his depression had been treated correctly - he would have been the same at 60, had he lived. I often wonder what path his life might have taken had he taken up Frost's offer and gone to America. What corpus of wonderful poetry we might be enjoying now, and perhaps he might even have learned to like himself a little.

The leitmotif of the conversation-with-self within this poem is a recurring one of Thomas's, as is the pathway theme. I sense it was in a way, the norm for him. I know that some suggest he was a schizophrenic, but I am more inclined to think it was his way of dealing with his problems. Walking and talking them through in his mind, which then comes out in his poems. Am I making the sense I wish to?

Ah, too long has passed since I read deeply on his mental state, but I hope I have got the gist across.

At all events, I am glad for a chance to give the grey cells a little trot round the paddock! Many thanks for sharing this evocative poem and - as always - wonderful paintings.

Mr. Bauer: I'm very happy to hear from you again, and I'm extremely grateful for your kind words. If this blog has been of any pleasure for you (however small) over the past few years, I am pleased and humbled. I can only say that I do this out of love for the poetry and the art that I share here, and, if it touches anyone, that is all that I can ask for.

Thank you again. I hope that all is well. Merry Christmas and Happy New Year to you.

Bovey Belle: as always, you have given me much to think about. I too sometimes wonder how things would have turned out for him had he survived the War. As for Frost's suggestion that he move to America, my reaction has always been: "I can't imagine Edward Thomas without England." I just can't see him being happy over here. But who knows? Selfishly, I certainly would have loved to see him write about my country!

I agree with your comment that he is constantly having a conversation with himself: either overtly, as in this poem, or, as Larkin so brilliantly observed, in the "almost infinitely-qualified states of mind" in his poetry. This is reflected in the way so many of his poems end with a taking back or reversal of something said earlier in the poem (a trait shared with Frost, as you know). All of this is in the nature of a conversation with himself.

As for Yellow Tavern: yes, I found it. But I remember more about that crossroads in the Virginia countryside than I do about the battlefield! Which is how life usually operates.