A. S. J. Tessimond's poetry can be a bit sardonic.  He is particularly caustic when it comes to the follies of what we now call "popular culture." However, two things save him from misanthropy and bitterness.  First, he has a romantic side.  Glimpses of love, beauty, and hope appear just when you think that he doesn't have it in him.  More importantly, he does not exempt himself from his gimlet-eyed view of the world.  One senses that he knows all too well the behavior that he describes in his poems.

This one can understand but cannot act,
Defeated by detachment and division.
That one can act but cannot understand,
Defeated by desire and concentration.
This one can gain and grasp but not enjoy,
Defeated by his haste and heat and hardness;
And that one can enjoy but not acquire,
Defeated by his softness and self-loving.
And so the half-man seeks the one he is not,
The friend or lover moving where he cannot,
The other terminal, the arc's completion,
The periscope with which to see round corners,
The one who still may someday, somewhere, somehow
Lead him across the frontiers of forbidden
Land, to a world reversed, looking-glass country
Beyond this bondage and beyond this boredom
Of this too known, too own world, this round narrow
Room here behind the mouth and nose and eyes.

This idea of searching for the ideal self or the ideal land is a subject that Tessimond also visited in "Where?" 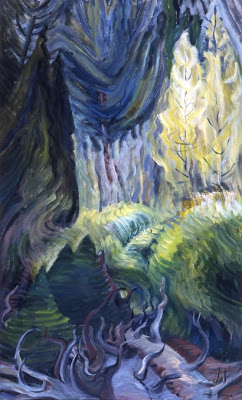