Although this is my favorite season, my recent spate of posts containing bitter-sweet autumn poems is starting to get to me.  Despite the fact that we have made barely a dent in the cornucopia (sorry, I couldn't resist) of autumnal verse, a brief respite is in order.  I feel a need for perspective.

Alas, the "perspective" that I have hit upon has a bitter-sweet air of its own. To wit:  the whole of Life (the World, Nature, Existence, "everything that is the case," et cetera) is, after all, a matter of "here today, gone tomorrow," isn't it?  Yet, if one presents that truism in a beautiful fashion, it is (for me at least) comforting.  (And, oh yes, bitter-sweet.)

To what
Shall I compare the world?
It is like the wake
Vanishing behind a boat
That has rowed away at dawn. 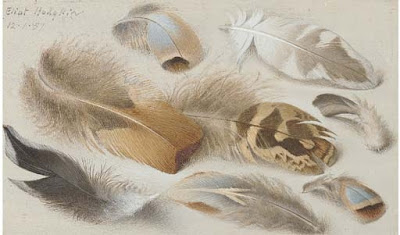 Our life in this world --
to what shall I compare it?
It's like an echo
resounding through the mountains
and off into the empty sky.

Yes, after your series of reflective autumn poems the last verse of Tessimond's 'Autumn' did bring us crashing back to earth, so to speak, sadly accurate as it was. Then Ikkyu came along and somehow made things better again!

What beautiful paintings. Thank you for introducing me to the work of Eliot Hodgkin. My education continues...

Ah how beautifully do the Japanese poets express the bitter-sweet feeling of Autumn. And then one of my most loved November poems- Shakespeare's 73rd Sonnet. "That time of year..."
Thank you for the poetry and the art.
Mary

That reminded me of this one--

Mr Plant: You are right -- it was the Tessimond poem that did it. As for Ikkyu (and Manzei and Ryokan) making things better: perhaps they offer only cold comfort. They may put things in perspective, but I still have to take out the trash while pondering the upcoming disintegration of the EU!

In any event, thank you, as always, for visiting, and for your thoughts.

Murgatroyd: thank you for visiting again. I'm happy that you like the Hodgkin paintings. I'm fairly new to him also: I've been exploring his works on the Internet and have been delighted at what I find. I wonder how I missed him all these years.

Ms Ahearn: thank you very much for visiting and commenting. And thank you as well for the reference to Shakespeare: the season does tend to bring that sonnet to mind, doesn't it?

Fred: thank you for stopping by again, and for the haiku by Issa. It does fit in well with the others, doesn't it? It also reminds me of another haiku by Issa, which he is supposed to have written after the death of one of his children at a young age (I'm sure you know it):

Yes, I do know that one. I think it's the same one, just a different translation. The one I posted has a similar heading.

Fred: I thought that the two sounded similar. However, they may be different -- as you know, the Japanese poets often re-visited the same images, but changed things a bit.

"Yet, if one presents that truism in a beautiful fashion, it is (for me at least) comforting."

This strikes me as a mature way to look at it. When I taught Anglo-Saxon elegies, my students often griped that the material was "depressing," but acknowledging the inevitable need not be. Thanks for highlighting these short, (bitter)sweet poems.

Yes, that could be. It's always a problem when dealing with versions by different translators.

Jeff: thank you very much for visiting, and for your thoughts. I'm pleased that you like the poems. I am reluctant to claim any maturity (being a member of the perpetually adolescent Baby Boom generation). But I do completely agree with you that "acknowledging the inevitable" is a wise course of action - i.e. (as I suggested in a comment above), being aware as you carry out the trash or pay the electric bill.

Fred: I know what you mean. I have been reading different translations of Li Po's poetry recently in order to see how the translators differ. As you know, it is an interesting exercise.