The Shadow: Three Variations On A Theme

The following poem (which I have posted before) has long been a favorite of mine.  It is a slight poem, but something about it -- the combination of humor and truth? -- has kept it embedded in my memory, and I often return to it.

The shadow of a fat man in the moonlight
Precedes me on the road down which I go;
And should I turn and run, he would pursue me:
This is the man whom I must get to know. 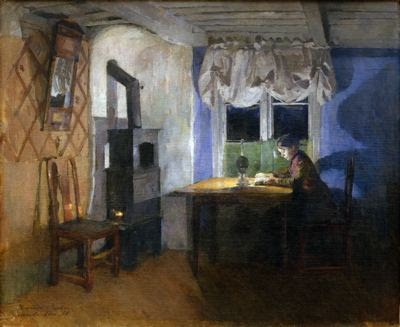 About a year ago, I came across the following poem by Edward Shanks (1892-1953).  The poem may be too archaic or quaint in diction for some tastes, but it caught my eye given my affection for "Things to Come."

Death, would I feared not thee,
But ever can I see
Thy mutable shadow thrown
Upon the walls of Life's warm, cheerful room.
Companioned or alone,
I feel the presence of that following gloom,
Like one who vaguely knows
Behind his back the shade his body throws --
'Tis not thy shadow only, 'tis my own!

I face towards the light
That rises fair and bright
Over wide fields asleep,
But still I know that stealthy darkness there
Close at my heels doth creep,
My ghostly company, my haunting care;
And if the light be strong
Before my eyes, through pleasant hours and long,
Then, then, the shadow is most black and deep.

Edward Shanks, The Island of Youth and Other Poems (1921).  There is something to be said for brevity.  (A quality that I admire more and more with age!)  On the other hand, Shanks's observation that "the shadow is most black and deep" when the sun is brightest is very fine indeed.

Of course, brevity is the stock-in-trade of Japanese and Chinese poets, who can always teach us a thing or two about cutting to the chase.

For the shadow trails the light,
implacably, indifferent to men. 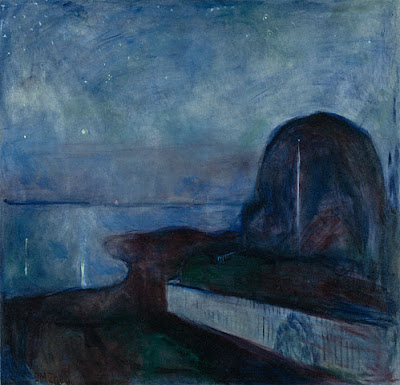 Beautiful twists in the first, you're right, it sticks in the mind.

And the second is haunting too, but seems more suited to being read aloud – it would have been one for Richard Burton.

I recently posted a poem on my blog--one of mine, and not nearly as wonderful as these--and in the comments, I've linked to this site. Thank you as always for good, good poems--and most appropriate artwork.

That last couplet made me shiver. Perfect for a grave-cold November afternoon!

Ms Pratt: thank you for visiting again, and for the kind words. And thank you as well for linking to your blog -- I will have a look at your poem!

Mr Russell: yes, it kind of comes out of nowhere (which is often the case with Buddhist poetry, I suppose). The weather here matches yours, and thus matches the feeling of the couplet as well. I appreciate your dropping by again.

i believe i was taught by JR's son, Gareth Reeves, ten years ago at Durham. We did "Irish Poetry After Yeats", where i first discovered Michael Longley and others. GR is also a poet though i was too lazy to seek his works out. However, i did read the poems of one of his colleagues, Michael O'Neill, and they range from the good to the very good. If you can find it, check out his book "The Stripped Bed". His academic prose is typical of academia but his poetry is good, the real deal.

ghostofelberry: as always, thank you for stopping by. I wasn't aware of either Gareth Reeves or Michael O'Neill, so I appreciate your bringing them to my attention. Thus far, I was able to find a few poems by O'Neill on his publisher's website, and I agree with you -- his poetry is worth seeking out. Thank you again for the recommendation, and for visiting again.