Eugene Lee-Hamilton's "Soulac" (which appeared in my previous post) contains the lines:  ". . . as the salt winds sweep/The restless hillocks of ill-bladed sand."  "Salt winds" reminded me of a poem by Norman MacCaig that contains the phrase "salt wind."  MacCaig's poem, like "Soulac," is about the passing of time, but the perspective is different.  Although aging and mortality are acknowledged, there is a lovely recognition of the life that accompanies them.

The alder tree
shrivelled by the salt wind
has lived so long
it has carried and sheltered
its own weight
of nests.

There is something to be said for brevity and directness (bearing in mind that they do not preclude depth and implication and suggestiveness).  The Chinese and Japanese poets come to mind.  In fact, "Old Poet" sounds as though it could have been written by, say, Wang Wei or Ryokan.  We should also remember, for example, that Edward Thomas wrote a number of fine four-line and eight-line poems.

Thom Gunn, in an excellent essay on the poetry of Thomas Hardy, makes an observation that merits thinking about in connection with brevity and directness.  Gunn notes approvingly the absence of "rhetoric" in Hardy's poetry, contrasting it with "the strain of all that rhetorical striving" in Yeats's poetry.  Gunn writes:  "Rhetoric is a form of pretence, of making something appear bigger or more important than you know it is."  Thom Gunn, "Hardy and the Ballads," The Occasions of Poetry (North Point Press 1985), pages 104-105.

As one might expect, poems that are brief and direct tend to be short on rhetoric.  "Old Poet" is, I think, a wonderful example of a great deal being accomplished in a small space, without rhetoric. 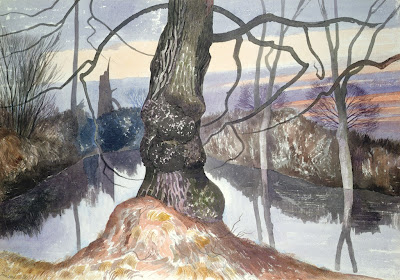 John Nash, "Wintry Evening, a Pond"
Posted by Stephen Pentz at 12:10 AM

You are right about the poem. Gunn's comments about rhetoric and the lack of it in Hardy's poetry are v interesting. Will have to read more of it and see if he is right. I expect he is.

zmkc: thank you very much for visiting again, and for your thoughts. I guess Gunn's thoughts struck home for me because, a few months ago, I revisited Yeats's poetry and ended up saying something like: "Oh, come off it, Willie, get over yourself!" Thus, Gunn's contrast between the two seems telling to me.

Oh, yes, Hardy is unremittingly pessimistic and grave-haunted, and he probably wrote too many poems, but he doesn't wind himself up into ecstasies about himself and the universe the way Yeats (and others) do.