The three Victorian grave poems that appeared in my previous post reminded me of the following poem by Joan Barton.  Although Barton is not a Victorian poet, the poem (which is dated "November 1931") has a Victorian mood to it (particularly the closing lines, which sound as though they could have been written by Christina Rossetti).

I shall not forget that place
Where the dead were:
Only the rain, the rain,
No-one astir,
None with me when I found
The church in its fallow ground;

Oh there was nothing there
But nettles and rain and grass,
So tangled you could not tell
Where the churchyard was,
And below in the plain
Grey fields and fields of rain.

Only the ebony rooks
Into the early light
Out of the ebony trees
Silent took flight.
I was afraid to hear
A voice in my ear.

No sound but a rook on the wing,
And of endless summer rain
The vasty whispering,
Yet close to my ear again,
(No stir from the tangled weed),
I heard, "Perpetual seed,"
And still, "Perpetual seed."

As I have noted previously, Barton's poetry deserves greater attention.  She wrote few poems (which, in my view, is often a good sign), but those that she wrote are worth seeking out.  Her collection A House Under Old Sarum: New and Selected Poems (1981) includes poems from The Mistress and Other Poems, as well as additional poems written after its publication. 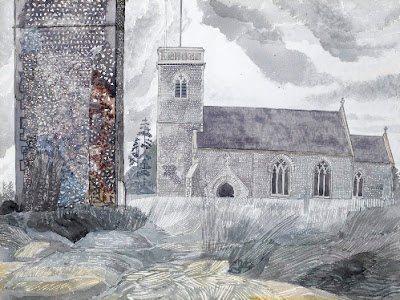 Mr Russell: thank you for visiting again. As it happens, the paintings are fairly new finds for me as well. As you know, given how prolific Bawden was, it is difficult to keep up with all of his works. I keep coming across new things that I wasn't aware of.