Perhaps this shifting sands business is not a one-way street.  Perhaps the scattered remains of Ozymandias and Soulac's buried minster are not the end of the story.  The following poem by Andrew Young (1885-1971) is about a sandy place in the north of Scotland.

But gales may blow again;
And like a sand-glass turned about
The hills in a dry rain
Will flow away and the old land look out;

And where now hedgehog delves
And conies hollow their long caves
Houses will build themselves
And tombstones rewrite names on dead men's graves.

The fate of the townships, kirks, and graveyards was, according to the Forestry Commission of Scotland, sealed by the great storm of 1694.  In later years, a forest was planted to arrest the sands.  Much of the forest was felled during the First World War to provide framing and duckboards for the trenches.  The trees have now grown back.  So, who knows what might happen?  The thought that one day "tombstones [will] rewrite names on dead men's graves" is an appealing one. 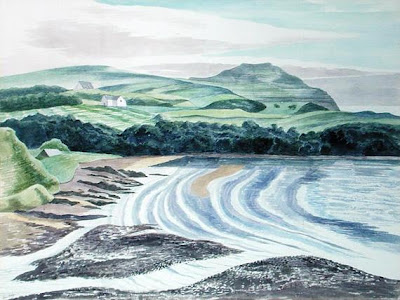 John Nash, "Incoming Tide"
Posted by Stephen Pentz at 12:10 AM

Lovely poem, gorgeous picture. The tombstones rewriting names immediately made me think of Eric Gill, who carved gravestones in Capel-y-Ffin when he lived there in the 1920s...

Another appealing idea is the emergence from the sea, like Debussy’s La cathédrale engloutie, of sunken spires. Mediaeval Dunwich, further south on the North Sea Coast, in Suffolk, tipped into the sea and now boasts fifteen submarine churches:

Fifteen churches lie here
Under the North Sea;
Forty-five years ago
The last went down the cliff.
You can see, at low tide,
A mound of masonry
Chewed like a damp bun.

In the village now (if you call
Dunwich a village now,
With a handful of houses, one street,
And a shack for Tizer and tea)
You can ask an old man
To show you the stuff they've found
On the beach when there's been a storm:

Knife-blades, buckles and rings,
Enough coins to fill an old sock,
Badges that men wore
When they'd been on a pilgrimage.
Armfuls of broken pots.
People cut bread, paid cash,
Buttoned up against the cold.

Fifteen churches, and men
In thousands working at looms,
And wives brewing up stews
In great grey cooking pots.
I put out a hand and pull
A sherd from the cliff's jaws.
The sand trickles, then falls.

Nettles grow on the cliffs
In clumps as high as a house.
The houses have gone away.
Stand and look at the sea
Eating the land as it walks
Steadily treading the tops
Of fifteen churches' spires.


Thanks for posting Andrew Young on his and his country’s saint’s day. Moulds for pilgrim badges depicting St Andrew with saltire cross over a thistle, have been found at North Berwick, which is lapped by the same sea as Culbin and Dunwich. It must have been the dangerous sea-crossings that entitled them to the lead badge of courage.

Just had to post the following from a news article of several days ago.

"Johnny C. Parks died two days before his first birthday more than a century ago. His grave slipped from sight along with the rest of the tiny town of Bluffton when Lake Buchanan was filled 55 years later.

Now, the cracked marble tombstone engraved with the date Oct. 15, 1882, which is normally covered by 20 to 30 feet of water, has been eerily exposed as a yearlong drought shrinks one of Texas' largest lakes.

Across the state, receding lakes have revealed a prehistoric skull, ancient tools, fossils and a small cemetery that appears to contain the graves of freed slaves."

This has attracted the interest of archeologists and historians. As you say, perhaps the last word hasn't been written yet.

Mr Russell: thanks for stopping by again, and for your thoughts. I didn't know that Gill carved gravestones. Well, if one was in need of one, one carved by Eric Gill would have done nicely! Thanks again.

Mr Thomson: thank you very much for visiting again, and for all of the interesting connections.

I confess (shamefacedly) that I was unaware that today is St Andrew's (and Scotland's) feast day. Perhaps there was some sort of mysterious power afoot. The coincidence pleases me a great deal.

And thank you for the poem by Anthony Thwaite, which I have not seen before. You have probably seen Ronald Blythe's piece "The Indefinite Shore," which is about the disappearance of coastline in East Anglia. (It appears in the collection Going to Meet George and Other Outings.) Blythe mentions Dunwich in the piece.

Fred: yes, that is a nice coincidence, and I appreciate your bringing it to my attention. Small Texas Atlantises emerging from the water!