"Old Couple In A Bar"

Charlotte Mew's vision of the old couple in Brittany as a pair of "frozen ghosts" is a bit discomfiting.  Thus, an alternative view of love in old age is worth considering.

Old Couple in a Bar

They sit without speaking, looking straight ahead.
They've said it all before, they've seen it all before.
They're content.

They sit without moving: Ozymandias and Sphinx.

He says something! -- and she answers, smiling,
and taps him flirtatiously on the arm:
Daphnis and Chloe: with Edinburgh accents. 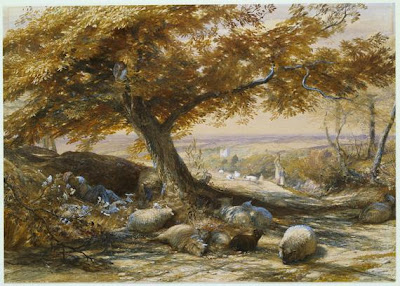 Samuel Palmer, "Sheep in the Shade"

MacCaig performs a neat trick by moving from the "frown, and wrinkled lip" of the "shattered visage" of Shelley's Ozymandias to the pastoral love of Daphnis and Chloe on a timeless Greek island.  A shepherdess and a shepherd ("with Edinburgh accents") sitting in a pub.  Yes, this is indeed preferable to "frozen ghosts."  (Although there is a time and a place for frozen ghosts as well.  I would not wish to be without them entirely.)

Samuel Palmer, "Pastoral with a Horse-Chestnut Tree"
Posted by Stephen Pentz at 12:10 AM

There is a companionship in silence sometimes, having somebody to do nothing with is sometimes more important than having lots of people to do something with.

Samuel Palmer is near perfection. You should curate your own art exhibition, you have great taste.

acornmoon: well said -- the sort of companionship that you describe is indeed important, and often undervalued.

I'm pleased to hear that you like Samuel Palmer. However, I'm afraid that I'm not qualified to curate anything but this blog! However, I certainly appreciate your kind words -- and I'm always happy to find that my enthusiasms are shared by others.

These paintings are fantastic!

Kerridwen: I'm glad that you like the paintings by Palmer -- he had a vision that is apparent in each of his works. Thank you for stopping by again.

Stephen -- I thought I would share a quick and rather disturbing (at least when it comes to poetry's place in our modern world)story.I was so smitten with this poem that I posted it, in its entirety, on Facebook, thinking primarily of sharing it with my former lit. students. To my surprise, a friend from high school, who is now a physician, reacted with, "Can you tell me what this means, in English?" I think we can all agree that this poem is immediately (and affectively)accessible, in terms of language(maybe a little challenging in terms of the allusions -- maybe). For an "educated" man to have such a reaction to it makes me worry -- both as a writer and as a teacher -- about the state of things. Yet another reason why the world needs wonderful sites like yours. Keep'em (as they say) comin'.

Chris: thanks for sharing the anecdote, discouraging though it is. (I agree with you that MacCaig's poem is not necessarily demanding -- although Daphnis and Chloe may be a stretch. But, in comparison with a great deal of modern poetry, it is, as you know, direct and plain-spoken.)

Which leads me to thanking you as well for your very kind words about what I do. I began doing this -- and still do this -- as a labor of love: to share what I love (if that is not too strong a word) with others, in the hope that they may find something they like.

That sort of goal may sound naive (and/or pretentious!), but since we live in a semi-Dark Age when it comes to culture, any tiny effort (such as this) seems worthwhile. I guess we all do what we can. I envy you for having a greater opportunity (given your profession) to preserve these sorts of things for the future.