"Everything Turns Away Quite Leisurely From The Disaster"

It's odd how certain poems prove to be the ones that inspire a youthful interest in poetry.  The following poem is one of the poems that did it for me.  My memory fails me, but I believe that I first encountered it in my final years of high school or in my first year of college.  I wouldn't have come upon it on my own:  in those days I was more interested in fiction, so I discovered it in a now-forgotten anthology assigned in class.

I do remember what attracted me to it:  the words, needless to say, but, more particularly, the combination of thought and feeling articulated in that fashion.  I know that this reaction is blindingly obvious, but the experience was new to me at the time.  I soon realized (I hereby profusely apologize to those who swear by fiction) that, in the long run, poems had novels and short stories beat hands down.

I hadn't read the poem for years, so I recently revisited it.  And, although our youthful passions can never by viscerally reproduced, I did feel a stir --   I still know (and feel) why it moved me. 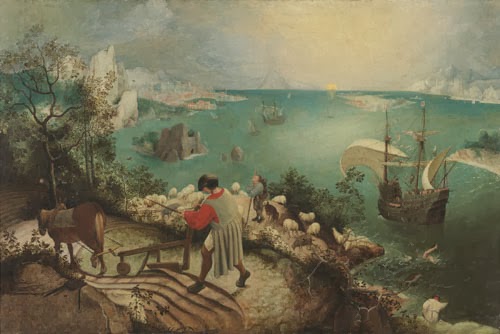 Pieter Brueghel the Elder
"Landscape with the Fall of Icarus" (c. 1558)

About suffering they were never wrong,
The Old Masters:  how well they understood
Its human position; how it takes place
While someone else is eating or opening a window or just walking dully
along;
How, when the aged are reverently, passionately waiting
For the miraculous birth, there always must be
Children who did not specially want it to happen, skating
On a pond at the edge of the wood:
They never forgot
That even the dreadful martyrdom must run its course
Anyhow in a corner, some untidy spot
Where the dogs go on with their doggy life and the torturer's horse
Scratches its innocent behind on a tree.

In Breughel's Icarus, for instance:  how everything turns away
Quite leisurely from the disaster; the ploughman may
Have heard the splash, the forsaken cry,
But for him it was not an important failure; the sun shone
As it had to on the white legs disappearing into the green
Water; and the expensive delicate ship that must have seen
Something amazing, a boy falling out of the sky,
Had somewhere to get to and sailed calmly on.

"Musee des Beaux Arts" refers to the Musee Royaux des Beaux-Arts de Belgique in Brussels.  Auden wrote the poem in Brussels in December of 1938.  Auden uses the spelling "Breughel" (line 14), but "Brueghel" or "Bruegel" are the more commonly-used spellings. 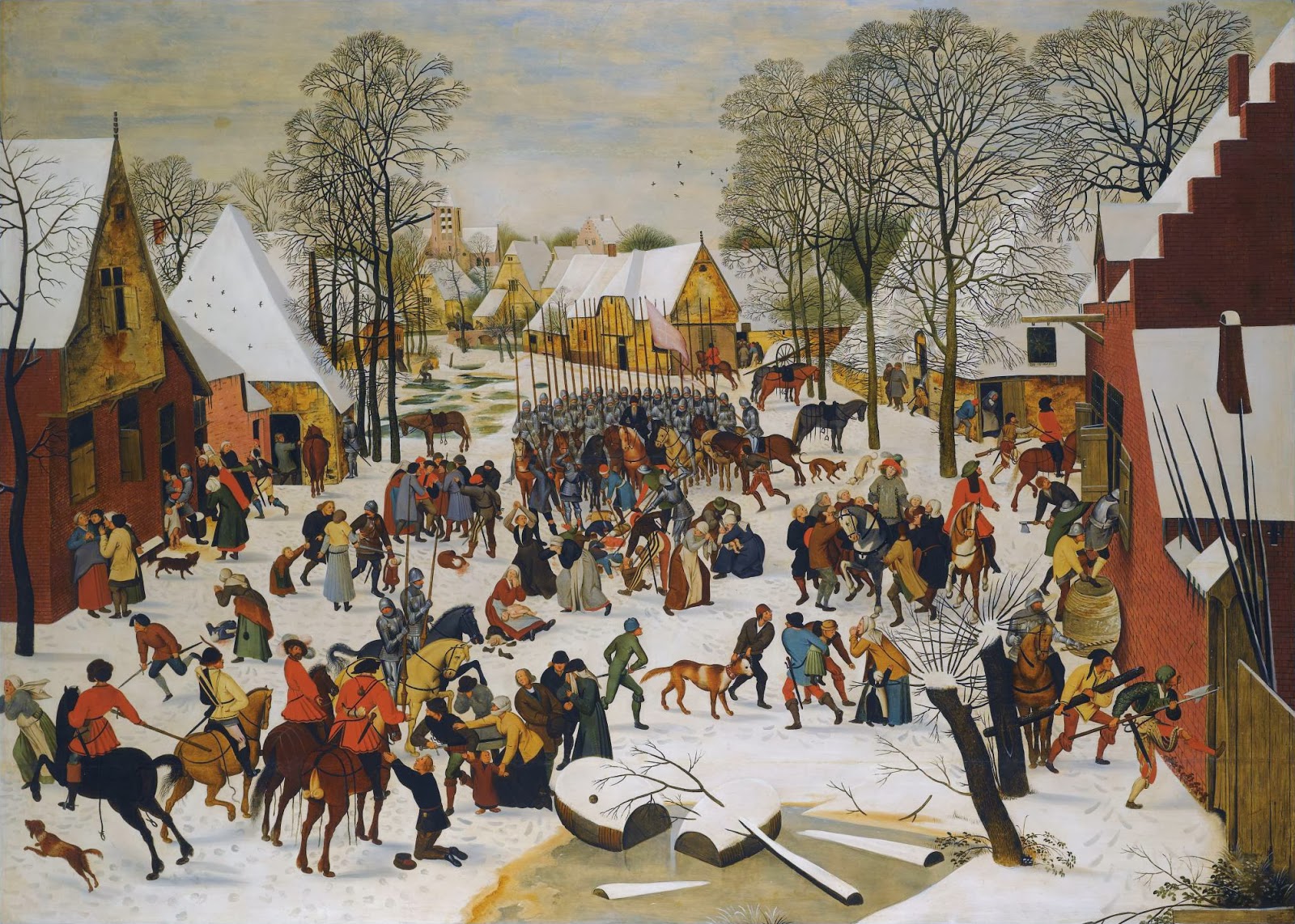 Commentators have suggested that the images contained in the first stanza of the poem may have their source in other paintings by Pieter Brueghel the Elder and Pieter Brueghel the Younger that are part of the collection of the Musee Royaux des Beaux-Arts, or that are located in other museums.  Max Bluestone, "The Iconographic Sources of Auden's 'Musee des Beaux Arts'," Modern Language Notes, Volume LXXVI (1961); Arthur Kinney, "Auden, Bruegel, and 'Musee des Beaux Arts'," College English, Volume 24, Number 7 (1963).  This may be so, but the quality Auden describes is typical of many other paintings by Brueghel the Elder, Brueghel the Younger, and other artists of the time.

Consider the following passage about life in the late Middle Ages :

"Just as the contrast between summer and winter was stronger then than in our present lives, so was the difference between light and dark, quiet and noise.  The modern city hardly knows pure darkness or true silence anymore, nor does it know the effect of a single small light or that of a lonely distant shout.

From the continuing contrast, from the colorful forms with which every phenomenon forced itself on the mind, daily life received the kind of impulses and passionate suggestions that is revealed in the vacillating moods of unrefined exuberance, sudden cruelty, and tender emotions between which the life of the medieval city was suspended."

Johan Huizinga, The Autumn of the Middle Ages (translated by Rodney Payton and Ulrich Mammitzsch) (University of Chicago Press 1996).

Although Huizinga's observations may seem to contradict what Auden is getting at, I think they are in fact complementary to (and implied in) Auden's thoughts: what stands out in the paintings (for me, at least) is a sense of vivid and vigorous life.  Yes, people may be going about their business as momentous events occur around the corner or behind their backs, but everything in the paintings seems to be charged with energy -- not electronic, once- or twice-removed modern energy (ironic and jaded), but the sort of "passionate" and "exuberant" energy described by Huizinga. I'm not suggesting that it was a lost Paradise.  But it was different. 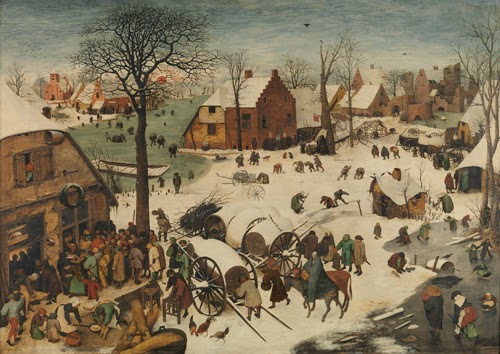 Mr Pentz, life has it's odd coincidences does'nt it. There are a few poems I too remember that awoke and inspired an interest in poetry for me. One was the Auden you post here another was Binsey Poplars by Hopkins. The lament of Swordy Well by John Clare I recall affected me very deeply and still does. As you so rightly say experiences can never be reproduced in exactly the same way and yet those words long since chanced upon can still move and move very strongly.
I agree too, that except on a few occasions, and it is particular passages rather than the whole novel, poems move one in a way novels seldom do.

Mr Ashton: it's a nice coincidence that Auden's poem was one of your early poems as well. I wasn't familiar with "The Lament of Swordy Well" before you mentioned it, but now I've looked it up: lovely. It brings to mind -- as many have noted -- how the enclosures so greatly affected (adversely) Clare's life (and no doubt his mental condition).

I should be careful what I say about fiction! I too have many favorite passages in novels and short stories that have moved me a great deal. But I do think (for me at least) that poems are something special.

As ever, I'm happy to have you stop by.

How wonderful today to read "Musee des Beaux Arts" & see the Icarus painting. But I don't have to read the poem -- I have known it by heart for years & quite often say it over to myself when I am awake in the night.
When we were in Brussels a few years ago of course we went to the museum. It was undergoing work, & so the only painting "from the poem" I could find was Icarus. It astounded me -- how utterly different it was from the picture I had in my head when thinking out the poem. The plowman was so strongly in the foreground, the perspective so unexpected.
What a treat your blog is -- Happy New Year -- Susan

Susan: Happy New Year to you as well. It's good to hear from you.

How lucky you are to have seen the painting. Yes, the perspective is marvelous, isn't it? You can see how it would have planted a seed in Auden's mind. I love the oblivious ploughman and the preoccupied fisherman -- a few yards away from Icarus's legs disappearing into the sea! And then there is the shepherd in the dead center gazing up into the sky -- is he idly gazing at a random bird or at Daedalus?

It is the sort of poem that begs to be memorized, isn't it? The opening phrase almost compels it.

Stephen, Auden can be such a difficult poet at times and many of his less well poems seem to me to have dated. But when he does it well, he does it exceedingly well and deserves his place amongst the first rank of poets. The ideas of history, suffering and stoicism in the middle ages, which the opening lines evoke for me, are echoed in his less well known Ode to the Medieval Poets. Incidentally, Brueghel's medieval world is explored in a very interesting and unusual film called The Mill and the Cross by the Pole Lech Majeski. Thanks as always for the picture and the poem.

Mr. McMahon: thank you very much for visiting again, and for your thoughts.

I appreciate your reference to "Ode to the Medieval Poets": I had read that recently as well, and I should have mentioned it in my post. I agree with you in your general views on Auden. I tend to run hot and cold on his poetry, and although the consensus (as you know) is that his poetry went into decline after 1939 and his move to America, I'm not so sure about that. I agree that a fair amount of his political poetry (of the 30s in particular) seems dated. But, as you say, the gems remain, and for those he will never be forgotten.

And thank you for mentioning The Mill and the Cross: it had been in my Netflix queue for quite some time, but last night I finally watched it based upon your recommendation. It is marvelous and beautiful, fulfilling the fantasy we all have had: "I'd like to walk into that painting!" But it is harrowing as well: I will need to watch it when I begin to have idle daydreams about how living in the "simpler" times of the late Middle Ages or early Renaissance would be wonderful. Yikes!

On a side-note: as you probably know, this idea of walking into works of art was also explored by Kurosawa in the Van Gogh dream (with Martin Scorcese appearing as Van Gogh!) in Dreams. But Majeski goes far, far beyond Kurosawa.

I few years ago I wasted many hours rendering this and a couple of other Auden poems in Lego. Find it here if anyone's interested. https://fentonaudenraybourn.wordpress.com/2013/07/02/auden-musee-des-beaux-arts/ Love the blog.

Alec: Thank you very much for sharing your Lego creations: wonderful! I like "Fleet Visit," the Fenton poems, and the skateboarder as well. Your Icarus in the sea is a sad sight! I never knew one could do such things with Legos. I can imagine it did take quite a bit of time. Thank you again.