Thomas was a devoted bird-watcher.   Although he seldom travelled abroad, he did go on bird-watching excursions to Denmark (where he "had a chance . . . to enquire about Kierkegaard, the Danish theologian [nice piece of wit and/or understatement, that!], although he did not get time to find his grave"), and, later, to France and Spain.  In France, after he and his companion were spotted getting out of their car carrying binoculars, "officers from the air force arrived and arrested them for spying!  The rest of the day was spent answering silly questions from the air force and the police, who had come all the way from Bordeaux to cross-examine these two dangerous men!"  R. S. Thomas, "Neb" ("No-one"), in Autobiographies (translated from the Welsh by Jason Walford Davies) (1997), page 68. 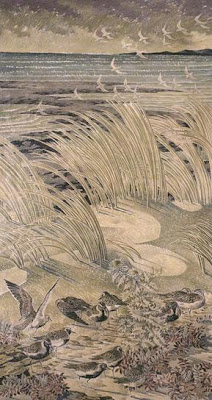 It seems wrong that out of this bird,
Black, bold, a suggestion of dark
Places about it, there yet should come
Such rich music, as though the notes'
Ore were changed to a rare metal
At one touch of that bright bill.

You have heard it often, alone at your desk
In a green April, your mind drawn
Away from its work by sweet disturbance
Of the mild evening outside your room.

A slow singer, but loading each phrase
With history's overtones, love, joy
And grief learned by his dark tribe
In other orchards and passed on
Instinctively as they are now,
But fresh always with new tears. 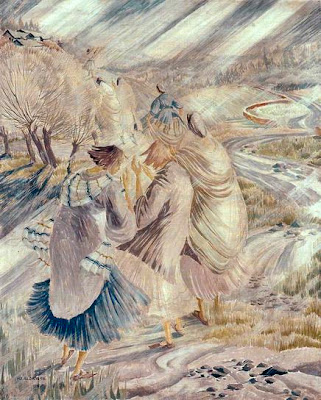 Thank you for this. A marvelous poem. And an artist I did not know. Your site is a rare find. All the best in 2012.

Mr. Schmidt: thank you very much for the kind words.

I wasn't aware of Eldridge's work until Thomas's Collected Poems came out in 1993: a watercolour by her appears on the dust-jacket. I was curious, and I then discovered who she was. Her work deserves greater attention, I think.

Best wishes in the coming year to you as well. Thank you for visiting.

I look forward to seeing that poem in a future post.

I came upon your site not long ago and now it's one that I read daily. Thank you for allowing me to sit and read with you while I enjoy my cup of tea.

Goethe Girl: thank you very much for visiting again. I hope to post "A Marriage" soon. It is quite lovely (in Thomas's somewhat fierce way).

Diane: I'm pleased that you found your way here, and I'm grateful that you continue to visit. I greatly appreciate your kind words.

Your lovely succeeding posts exhibiting the dualities of bird sound reminds me of something a friend who lived in China once shared with me: the birds zare thought to sing in the West, but in the East they cry.

Mr. Sigler: thank you for that thought -- I'll have to mull that one over a bit. As you know, the hototogisu (cuckoo) and uguisu (bush warbler) appear often in Japanese poetry, and not always in a sad context. My limited Japanese is failing me at the moment, and I cannot recall the word for bird sound -- i.e., whether it translates to "singing" or "crying." But it is an interesting idea.