As I began my afternoon walk yesterday, I could see a snow squall out on Puget Sound, approaching from the northwest.  Towards the end of the walk, it overtook me from behind with a sweeping hiss.  Just like that, a swirling white world.

In the following poem, Stanley Cook (1922-1991) takes an antic view of what falling snow might consist of.  Perhaps our new-fangled floating electronic world has rendered Cook's vision quaintly obsolete.  I think not. 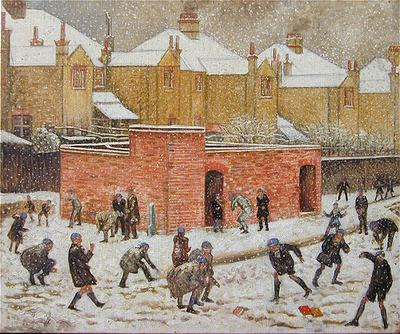 A bitter wind is tidying the attic of the sky,
Tearing the past into little pieces of snow
That dodge in three dimensions.  Unable to read
So many bits, I can but guess
They are codings, receipts and final demands
For income tax, insurance and rates,
Or threats to take it out or cut it off
And make you wait and pay to have it back;
Banker's orders you were asked to sign
And haven't to save the treasurer and covenants
You haven't signed either to save him money;
A list of dates of the century's rarer pennies
And a parody, satirising Social Security,
Of the twenty-third psalm; instructions
To sharpen the mower that had you had at the time
Would have saved your tipping the binmen to take it away,
The good reports the children had from school
And a list of pages to look at (Penguin edition)
For character and use of symbolism;
Directions for reaching a wedding once you have left
M62, forms of voting for people
You didn't know or didn't like or liked still less
When you read their guff -- supposing you did --
And apparently didn't vote for anyway, holiday ads.
A flurry of testimonials, too faded to use
In case you imagined at your age
Anyone would offer you another job,
Mixes opaquely to obscure the view;
Bits of a letter melt upon an eyelash.
All about you the bushes, every branch
As stuck with white as a park-keeper's spike,
Retain the litter, the lightly falling debris
Scattering as far as the eye and the mind's eye can see. 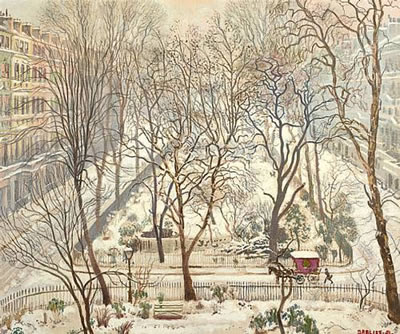 I agree with you, Stephen -- they could just as easily have been floating electronic bits of information frozen into flakes made of electronic vapors...

Too bad some of them won't just melt away. It's usually the ones I would keep that somehow vanish, even in today's e-world.

Thank you for visiting again, Chris. Good point! These days the air around us is constantly full of electronic messages, isn't it? The poem is still on target.

As always, thank you for stopping by, Fred. Yes, although we have supposedly gone electronic, the idea of a "paperless" world is still just a pipe-dream, isn't it?

Thank you for such a fantastic web site. On what other blog could anyone get this kind of information written in such an insightful way? I have a presentation that I am just now working on, and I have been looking for such info.

Anonymous: thank you for stopping by, and for the kind words. Please visit again.

Lovely to see the DP Bliss paintings, he has the ability to transform the mundane into something quite magical. I particularly like another of his: February in my Garden from 1938, beautifully atmospheric....marvelous blog by the way

Mr Morgan: thank you for visiting, and for the kind words.

Yes, Douglas Percy Bliss's work is wonderful. I first discovered him through his wood engravings, and only later found out about his paintings. I have not seen "February in My Garden" -- I'll try to see if it is out there somewhere.