I think that the following poem by Norman Nicholson provides a fitting start to the New Year.  I confess that I have never been a big fan of New Year's Eve celebrations.  (I know, I know:  "Killjoy!")  I do, however, like the bigger picture that Nicholson provides.

For the New Year

The stars wheel past the windows
Like flocks of winter sparrows;
The bell clangs out the hours,
And frost sparkles like stars,
And the wind blows up the dawn
With spring behind it and rain
And the spikes of daffodils
And June on fire in the hills.
The apples crowd the bough
Beneath the frosty Plough,
And autumn snow is blown
White as the harvest moon
On currant and raspberry cane.
And the wild ganders fly
Nightly across the sky.
The seasons flit like linnets,
And years whirl past like planets,
And the earth's orbit mars
The changeless map of stars.
The splintered light which now
Gently probes my eye
Is of a star that burned
When the Scots fired the land,
When the Norsemen robbed the dales
And hacked their names on the fells,
Or when the iceberg lakes
Elbowed among the rocks
And carried the Devil's stone
To the hill above the town,
Where through my dormer bay
Drizzles the Milky Way. 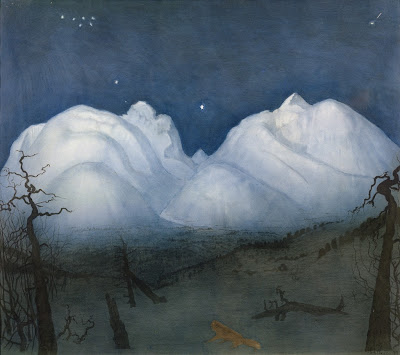 What a wonderful poem. It's by that man who didn't need to travel far to see so much, isn't it? His way of telling what he sees is very direct, he and his concerns don't really enter into it. We have to infer them if we want to consider them. But he leaves no doubt that what he sees is very personally felt by him. So he and the reader don't meet face to face but stand shoulder to shoulder, looking outward.

That's what I've got out of the poems of his that I have read, anyway.

A gift for the new year--thank you!

Kylie: thank you very much for your thoughts, which describe the poem (and Norman Nicholson's poetry in general) wonderfully. In fact, Nicholson was a self-effacing man, which is, I think, reflected in his poetry. Your characterization of "stand[ing] shoulder to him, looking outward" is a fine one, and fits him and his work well.

Thank you for this. Having spent three or four Christmases in Cumbria when my parents lived in Carlisle I have fond recollections of winter walks in the dales. The mention of Devil's stone perhaps deserves a footnote from Nicholson himself, who describes these glacial boulders in chapter III ('The Shaping of the Rock') of his 'Cumberland & Westmorland' (1949), p. 43:

'Each dale had its own glacier which swelled till it overflowed the flanks of the dale and the whole of the lower hills were flooded with it. Eventually only the highest central peaks stood like an archipelago above the slow tides of the ice, and perhaps even these went in the end. The reverse must have been the case when the ice retreated. First it descended the slopes of the fells, then it left bare the ridges between the dales and finally the glaciers dwindled. This coming and going of the ice may have happened several times, with periods of comparatively temperate climate in between, but when, at last the ice had gone it left a changed country.
The "deposits" are perhaps the least interesting of the glacial effects. There are huge daubs of boulder-clay all over the coastal lands, and dull humpy morraines, where nothing will grow but sedges and sour grass. Frequently, among the fells, the glacial drift dammed up small valleys or combes and formed tarns, many of which, no doubt have since drained away.
More amusing are the perched boulders of which the Bowder Stone near Keswick is the most famous example. There are many of them to be seen, especially in the lower hills surrounding the central district. They look cheerfully ridiculous in their situations, like Humpty Dumpty, and there are often local legends to explain why they are there – legends usually connected with the Devil.'
(It's nice to see in the first sentence how he uses 'till' where other writers would perhaps have preferred 'until'. 'Till' is as Norse as 'tarn' and 'fell' and the 'skyander' which delighted De Quincey.)

Nicholson also meditated on stone in his poem 'Wall', the first verse of which reads:

The wall walks the fell -
Grey millipede on slow
Stone hooves;
Its slack back hollowed
At gulleys and grooves,
Or shoulders over
Old boulders
Too big to be rolled away.
Fallen fragments
Of the high crags
Crawl in the walk of the wall.

Walls still standing but never standing still. It takes a poet to set a wall in motion.

Mr. Thomson: thank you very much for the helpful information! I had tried (unsuccessfully) to find out something about "the Devil's stone" in Cumbria: you have filled the gap wonderfully.

I also seem to recall (I am on the road now, so I do not have access to my copy of Nicholson's Collected Poems) that he wrote a poem about a rock formation in Cumbria called "The Old Man."

As always, thank you for stopping by. Best wishes for the coming year.

Thank you for visiting again, Anita. Yes, Sohlberg is a wonderful painter. I'm pleased that you like it. As you no doubt know, it is one of three versions of this painting.