Given his experiences in the First World War, Edmund Blunden had a much keener appreciation of what lies beneath the ice than most of us ever will.  But he was a kindly man, and he would not, I think, have held our innocence against us.  Thus, he gives us the following poem, which is both a warning and an exhortation.

The hop-poles stand in cones,
The icy pond lurks under,
The pole-tops steeple to the thrones
Of stars, sound gulfs of wonder;
But not the tallest there, 'tis said,
Could fathom to this pond's black bed.

Then is not death at watch
Within those secret waters?
What wants he but to catch
Earth's heedless sons and daughters?
With but a crystal parapet
Between, he has his engines set.

Then on, blood shouts, on, on,
Twirl, wheel and whip above him,
Dance on this ball-floor thin and wan,
Use him as though you love him;
Court him, elude him, reel and pass,
And let him hate you through the glass. 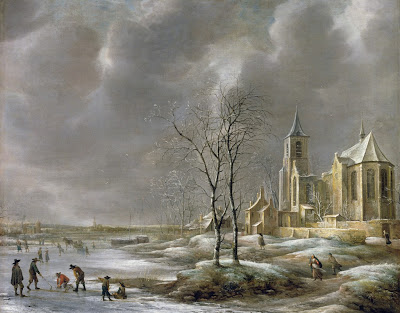 On the subject of skating at night, the following passage from John Cheever's journals comes to mind:

"Skating one afternoon at the Newberrys'.  The end of a very cold winter day.  The ice, contracting in the cold, made a noise like thunder.  Walking up the frozen field to the house we could hear it thundering.  We went back that night.  There was no one else on the pond.  The G.s' dog was barking. There was no moon and the ice was black.  It seemed, skating out into the center of the pond, that the number of stars I could see was multiplied. They seemed as thickly sown as a rush of snowflakes.  As I skated back to the end of the pond, the number seemed to diminish.  I was confounded.  It could have been the whiskey and the wine.  It could have been my utter ignorance of cosmology." 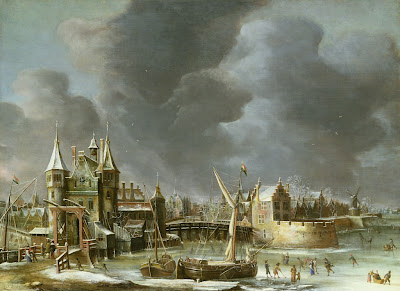 Jan Abrahamsz Beerstraten
"A View of the Regulierspoort, Amsterdam, in Winter" (17th century)
Posted by Stephen Pentz at 12:10 AM

Have you read the quite wonderful children's novel, Tom's Midnight Garden? I think you'd enjoy it. The skating scenes in that are superb.

Thank you for the recommendation of Tom's Midnight Garden -- I hadn't heard of it, nor of Philippa Pearce. I'll track a copy down.

Thank you for stopping by again, and best wishes for the coming year.