Christina Rossetti had what some might call a fatalistic (and what others might call a realistic) view of our time on Earth.  I thought of the following sonnet because of the phrase "twilight grey" in its final line -- an admittedly tenuous affinity with my previous post on Arthur Symons's fondness for the words "grey" and "twilight."

But there is much more afoot in Rossetti's poem than "twilight grey."  I am among those who find Rossetti's view of life to be realistic, not fatalistic. On the other hand, supposing that she is indeed fatalistic, there is a great deal to be said for fatalistic beauty (accompanied by an Explanation of Life). 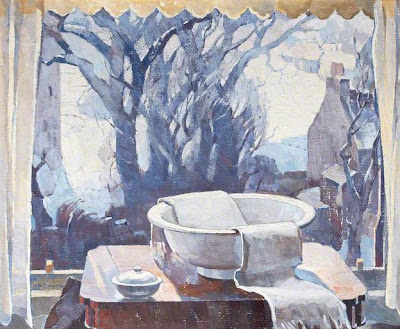 Vanity of vanities, the Preacher saith,
All things are vanity.  The eye and ear
Cannot be filled with what they see and hear.
Like early dew, or like the sudden breath
Of wind, or like the grass that withereth,
Is man, tossed to and fro by hope and fear:
So little joy hath he, so little cheer,
Till all things end in the long dust of death.
Today is still the same as yesterday,
Tomorrow also even as one of them;
And there is nothing new under the sun:
Until the ancient race of Time be run,
The old thorns shall grow out of the old stem,
And morning shall be cold and twilight grey.

Christina Rossetti, Goblin Market and Other Poems (1862).  Lines 1-3 and 11 have their source in Chapter 1 of the Book of Ecclesiastes (King James Version).

Yes, I know, the poem may elicit a "Whew!"  Perhaps it is not the thing to start the day with.  But Rossetti is more adept than even world-class fatalists such as, say, Thomas Hardy or A. E. Housman (although Housman comes close to her) at delivering a grim message in a soothing fashion.  To wit:  "Like early dew, or like the sudden breath/Of wind."  Or: "The old thorns shall grow out of the old stem."  Or even this:  "Till all things end in the long dust of death."  (All those lovely monosyllables!) The prospect (nay, the "certainty") of our mortality has never seemed so . . . reassuring?  Comforting? 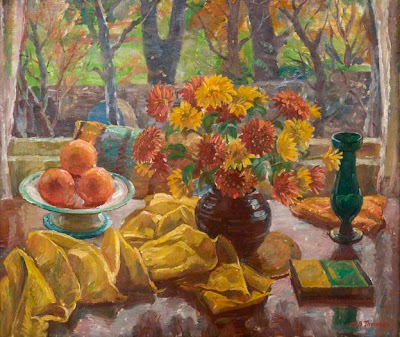 There is probably a word that describes the poem that falls between "realistic" and "fatalistic." After all, even Herrick's "Gather ye rosebuds while ye may" expresses similar realistic sentiments, if not fatalistically. It may be the 19th-century loss of faith that plays a role here, though loss of faith may not apply to Rosetti.

Christina Rossetti's poetry is wonderful - thanks for the post and the quotes. I've always been fascinated by the paradox between her life and personality and the poetry she wrote. I tried to make connections in my biography of CR http://www.amazon.co.uk/CHRISTINA-ROSSETTI-Learning-First-ebook/dp/B005XR4H18/ref=sr_1_2?s=books&ie=UTF8&qid=1327856540&sr=1-2
- including her relationship with other female poets of the time and her place within the Pre-Raphaelites. Sadly, only available on Kindle now, though previously pub by OUP.

Goethe Girl: your point is an excellent one. I wasn't completely happy with "fatalistic," but I didn't think that "pessimistic" was the right word either, given Rossetti's religious faith. Perhaps "resigned," or something along those lines?

I'm not fully informed on Rossetti's life, but I do know that she was a devout "High Church" Anglican, and that she wrote hundreds of devotional poems. Which doesn't mean, of course, that she was unaffected by the 19th century's scientific/religious conundrums.

And thank you for the thought on Herrick: it fits well!

Ms Jones: thank you very much for visiting, and for your comments. And thank you also for the link to your book on Rossetti -- I'm not a Kindle reader, so I'll have to track down a copy of the book. I look forward to seeing your thoughts on her poetry.

I would go with "bleak," for the only color is grey, while the early dew lasts only a short time, and the "sudden" breath of a wind. Nothing lasts but only for a brief flicker.

Yet, the Book of Ecclesiastes is one of my favorites, and why it is, I've never understood, but accepted.

The first painting fits well, but the second--the Still Life? Well, it's a good antidote, anyway.

Just noticed the title of the poem--One Certainty. How does it go--there are only two certainties--death and taxes?

Great poem--thanks for providing it.

Fred: thank you for dropping by again, and for your thoughts.

"Bleak" fits well. After all (as you probably know), Rossetti wrote the poem "A Christmas Carol" (best-known as set to music by Gustav Holst), which begins: "In the bleak mid-winter/Frosty wind made moan. . ."

You are correct: I thought that the second painting was a nice "antidote" in terms of color -- but still the dying of autumn!

Yes, the title is very fine, I think. It's what first caught my eye.

I often wonder if the connection between the message of artists' work and their moods isn't overrated. Beethoven wrote some of his happiest, most life-affirming, music when he was at his most depressed. On the other hand, Nabokov was by most accounts an extremely content man who just happened to write about morbid subjects. Whatever the answer, it's undoubtedly a tough question.

Mr Tucker: thank you very much for visiting, and for the thought-provoking comment.

Being a Larkinite, this is the first thing that popped into my head as I thought about your comment. It is from an interview with Larkin in 1979: "Actually, I like to think of myself as quite funny, and I hope this comes through in my writing. But it's unhappiness that provokes a poem. Being happy doesn't provoke a poem. As Montherlant says somewhere, happiness writes white." (Required Writing, page 47.)

Now, I don't hold Larkin out as the definitive authority on these matters, but I do incline to his view. But, of course, what is produced out of unhappiness (or melancholy, pessimism, etc.) can be -- as you note about Beethoven -- absolutely lovely and uplifting. I find this to be true of the poetry of, say, Larkin, Edward Thomas, and Thomas Hardy, all of whom had less-than-sanguine outlooks on life.

But, as you say, it is not a question that can be easily answered.

I would go for something like 'understanding' or 'truthful' or 'clear eyed', if 'fatalistic' needs to be replaced.

zmkc: those all sound like suitable replacements. I chose "fatalistic," I suppose, because I was trying to account for Rossetti's undeniable melancholy. I also came across a quote by her referring to "the virtue of resignation." Mackenzie Bell, Christina Rossetti: A Biogrpahical and Critical Study (1898).

But I agree with you: I tend to find these sorts of poems "clear-eyed" as well.

As always, I greatly appreciate hearing from you.