"We Met Under A Shower Of Bird-Notes"

As I noted in my previous post, R. S. Thomas and Mildred E. Eldridge (he called her "Elsi") were married for over 50 years.  As the old saw goes, none of us can ever know (or should presume to know) what goes on inside a couple's marriage.  However, I will nonetheless hazard a guess that 50 years of living with R. S. (as he refers to himself in his autobiographical piece "Neb," which translates into English from Welsh as "no-one") may not have always been a bed of roses or a walk in the park or a piece of cake (take your pick). 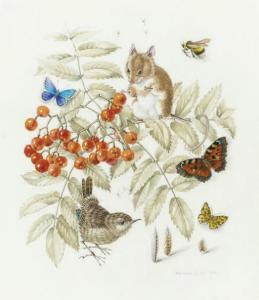 Eldridge died in 1991.  A year after her death, Thomas's collection Mass for Hard Times was published.  It bears the following dedication:  "To the Memory of My Wife, M. E. Eldridge, 1909-1991."  The collection includes the following poem.  Thomas subsequently placed the poem at the end of his Collected Poems.  No other poem from Mass for Hard Times was included in the Collected Poems. 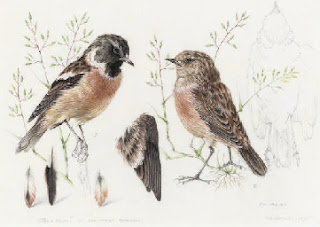 We met
under a shower
of bird-notes.
Fifty years passed,
love's moment
in a world in
servitude to time.
She was young;
I kissed with my eyes
closed and opened
them on her wrinkles.
'Come,' said death,
choosing her as his
partner for
the last dance.  And she,
who in life
had done everything
with a bird's grace,
opened her bill now
for the shedding
of one sigh no
heavier than a feather. 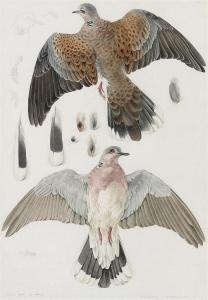 Mildred E. Eldridge
"Study of a Turtle Dove at Bardsey"

This is one of those poems that I am reluctant to say anything about for fear of destroying it.  (Although this is true of any good poem, isn't it?)  At the risk of sounding fuzzy-minded, sentimental, and romantic, I'm afraid that my "literary analysis" of the poem begins and ends with this:  it took my breath away when I first read it 18 or so years ago, and it took my breath away when I read it today.  Others, of course, may feel differently.

Today I've read it for the first time, thanks to you, and it has brought sparkles of tears to my eyes. I'm now going to kiss my wife. Thank you for giving me the excuse (as if I should ever need one). Isn't poetry wonderful sometimes?

I, too, have just had my breath taken away by that poem so beautifully complimented by your choice of illustration. You continue to inspire and capture my imagination with your posts SP!

John R: what a wonderful response to the poem! I am of the old-fashioned school of thought that good poetry is directly applicable to how you ought to live your life: not necessarily in terms of what is "right and wrong" or teaching a "philosophy of life," but, rather, in terms of being attentive to the world and to the people around you.

Thank you very much for visiting, and for sharing your experience.

P.S. I regret not having the gumption to mention that, as with you, "sparkles of tears" were included in my first, and subsequent, readings of the poem.

Thank you for the kind words, but all the credit goes to the poet and the artist, of course. I regret that Eldridge's work is not better known (or more available). The pieces that I have been able to find on the Internet are all lovely. They were both avid bird-watchers, so birds and the natural world were often her subjects.

Thanks for posting this, Stephen. In the past, I've found Thomas a bit too stark, but this poem humanizes him while preserving his curmudgeonly dignity.

Thank you for stopping by again, Jeff, and for your thoughts. I agree: whenever I find myself or others complaining about Thomas's grumpiness, I bring this poem to mind in order to keep things in perspective about him. "Preserving his curmudgeonly dignity" is a wonderful description! He does let down his guard in the poem, yet, as you suggest, not entirely.