The snow that we received earlier this week has mostly vanished. However, the remaining bright white patches upon the lawns (which stay green all winter long in our temperate climate) and in the hollows of the open fields (grey-brown underlaid with green) are lovely.  All of which evokes the titles, at least, of the following two poems.

White tree on black tree,
Ghostly appearance fastened on another,
Called up by harsh spells of this wintry weather
You stand in the night as though to speak to me.

I could almost
Say what you do not fail to say; that's why
I turn away, in terror, not to see
A tree stand there hugged by its own ghost. 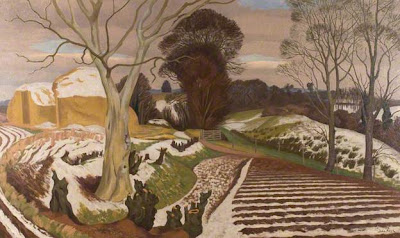 No argument, no anger, no remorse,
No dividing of blame.
There was poison in the cup -- why should we ask
From whose hand it came?

No grief for our dead love, no howling gales
That through darkness blow,
But the smile of sorrow, a wan winter landscape,
Hedges freaked with snow. 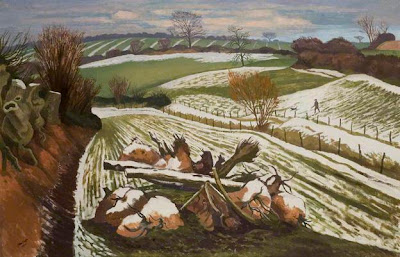 Maybe "hedges freaked with snow" is meant to call up the "Cherry hung with snow" of Housman? Not maybe. Surely?

Anonymous: thank you for visiting and commenting. I hadn't thought of the Housman connection, but I see the similarity. I haven't read enough about Graves to know whether he in fact had Housman's poem in mind.

I found your blog when Googling Norman McCaig. Lovely poems and paintings.

Sea Penguin: Thank you very much for the kind words. I'm happy that you found your way here, and I hope that you'll return soon. Thanks again.